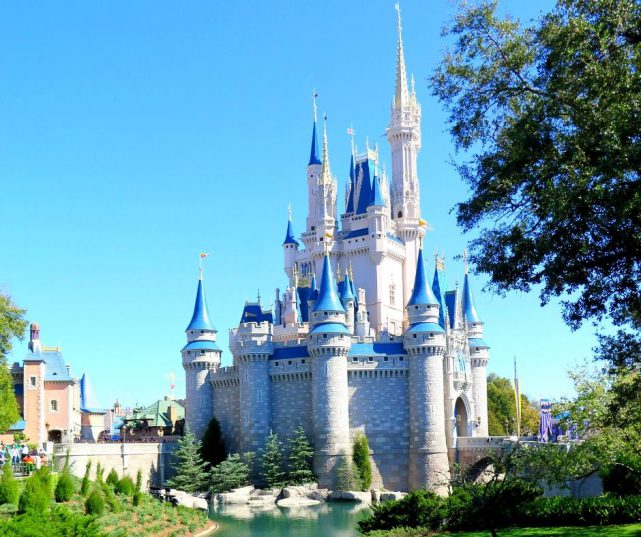 Did you know that there are so many things to do at Disney World for Adults?

Going to the Walt Disney World as an adult without kids, or kids who can go off on their own for a while is a pretty fun experience.

In fact, there’s a whole new world at your fingertips once you check in to your hotel and tap your MagicBand to get into the parks.

You just have to be willing to look a little deeper into the experience Walt Disney World has to offer outside of the rides and seeing Mickey Mouse and his pals. Both of which are still great, but everyone else is going to be doing those things too!

If you’re curious about if Disney World is for adults, then keep reading for 21 unique things for you to do while on vacation at Walt Disney World. You’ll see how you can bring even more fun into your trip!

We’ve broken down the activities based on location so you can plan your days even easier.

Magic Kingdom is the park most people think of when they think of Walt Disney Wold. This park mainly focuses on kids and family time, but that doesn’t mean adults traveling solo can’t get in on the fun too!

Right on Main Street U.S.A. there’s a small barber shop where you can get your haircut. If this is of interest, then you’re going to want to get a reservation right when you walk into the park. Mainly due to the fact that the time slots for each day go quickly.

While getting your haircut you might see kids getting their first haircut, but don’t let that discourage you from popping in. The Cast Members who work at the Harmony Barber Shop are ready to welcome anyone into their seats.

2 – Dine in the Secret Room at Skipper Canteen

If you plan on dining somewhere at Magic Kingdom, we highly suggest Skipper Canteen located in the Adventureland part of the park. The restaurant  is based on the Jungle Cruise attraction that is also located in Adventureland.

One unique part of this restaurant is that you can dine in a secret room. This room is hidden behind massive bookshelves, and ties together the story of the Society of Explorers and Adventurers.

The room in Skipper Canteen is meant to resemble the room where the band of characters would plan their next adventure together. This is one of the unique experiences at Disney World for adults.

Read how to find your perfect vacation home rental near Disney World by Clicking HERE!

3 – Take the Keys to the Kingdom Tour

The Keys to the Kingdom Tour is for anyone over 16, and allows you to get a backstage look at everything that goes on at Magic Kingdom during the day.

You’ll get to go down to the ultilidoors where Cast Members roam to get from one side of the park to the other, and you’ll even ride a few rides after getting a little peek behind the curtain on how they work.

Disney’s Hollywood Studios has undergone quite the transformation over the past few years. The park is now a haven for Star Wars and Pixar fans.

But there are a few hidden gems for adults who want something fun to do at the park besides get on a few attractions.

Oga’s Cantina is the newest establishment at Disney’s Hollywood Studios that offers adults a libation and a reprieve from the sometimes hectic feeling of the park.

Inside you’ll be able to munch on a snack, enjoy a space-inspired drink, and listen to music from a droid DJ.

If there’s one thing many adults have waited their entire lives to do it’s pilot the Millennium Falcon! Now you can do just that at Disney’s Hollywood Studios inside Star Wars: Galaxy’s Edge.

The new land features an attraction where guests can put the fastest hunk of junk in the galaxy into light speed and dodge the First Order.

Just be sure to get the ship back in one piece or you’ll loose out on bragging rights and galactic credits.

Disney’s Hollywood Studios is the perfect park to enjoy a dessert party. These are an extra cost, but are worth it for the reserved seating for the nightly fireworks shows.

Plus, you’ll enjoy some tasty treats and drinks, and the little surprises you get at the party.

Epcot has long been considered Disney’s more adult park. There’s so much to explore that you couldn’t do it all in one day.

But if you did only have one day, these are the unique things you would need to experience.

7 – Drink Around the World

This is a quintessential adult Epcot activity.

Drinking Around World Showcase can be really fun by yourself, or with a few friends, especially because you can be more selective about the amount and what types of drinks you order.

One of our top recommendations for adults going to Disney World.

8 – Dine at a Chef’s Table Restaurant

There are a few restaurants at Walt Disney World that offer a chef’s table experience. However, none of them even come close to the experience at Takumi-Tei inside the Japan Pavilion at Epcot.

This exclusive experience is meant for small groups and lasts up to four hours, with regular breaks from eating.

If you’re looking to treat yourself, then this is the spot to do it. You can only make reservations by calling the restaurant, or heading there first thing in the morning to reserve the chef’s table room, which only has one seating per night.

9 – Take a Tour of Epcot’s Greenhouses

If you’ve ever ridden Living With The Land at Epcot, then you might have seen groups of people on a tour of the greenhouses. The tour is super cheap and about an hour long.

It’s so much fun to see behind the scenes at the greenhouses to see how the fruits and vegetables are grown for various restaurants throughout the Walt Disney World resort.

Disney’s Animal Kingdom is often thought about as a half-day park, but we would beg to differ on that sentiment. The park is filled with beautiful animal exploration trails, tours to take, and a hidden bar!

10 – Sip on Drinks at Nomad Lounge

Nomad Lounge is one of the most underrated bars at Walt Disney World.

It’s located just near the entrance of Pandora- The World of Avatar, with a beautiful outdoor seating area near a river, and an indoor area that’s meant to look like a mountain hiking outpost.

If you’re planning on ordering drinks, which we highly suggest you do, the Hightower Rocks is a refreshing take on a watermelon margarita.

One of our top rated lounges at Disney World for adults.

Did you know you could get up close to elephants at Disney’s Animal Kingdom? On the Caring For Giants tour you get to do just that.

The tour allows you to get as close as possible, while still being at a safe distance to see just how incredible these creatures are. You’ll learn about the herd at Disney’s Animal Kingdom and what makes them so unique.

If elephants aren’t you thing then you can take a Rhino tour called Up Close With Rhinos.

Exploring the Disney hotels can be a bit of a challenge, especially if you don’t have your own car. But, if you can get to the resorts, then you’re going to want to do these things!

We hear they know just about any song people might request, so it’s going to be hard to stump them. Be sure to get to Jellyrolls early, otherwise you might not get in since it’s such a popular location.

14 – Try Your Hand at the Kitchen Sink

The Kitchen Sink is one of Disney’s most popular food challenges!

If you’re a major fan of ice cream you’re going to want to get to Beaches and Cream at Disney’s Yacht and Beach Club Resort to try this out.

The massive sundae is served in an actual kitchen sink and features eight scoops of ice cream with all of the toppings you can imagine.

15 – Take a Progressive Dinner via Monorail

One of the more unique dining options at Walt Disney World is to take a progressive dinner tour around the monorail resorts, which include:

You can do this with Disney as a separately paid dinner, or by yourself and have even more fun by choosing what your options are and exploring the resorts between courses.

The Disney water parks are often forgotten when planning a vacation. We would tell anyone planning to go to Walt Disney World to get over to Typhoon Lagoon or Blizzard Beach as soon as possible to take part in these unique activities.

At Disney’s Typhoon Lagoon you can learn to surf in their massive wave pools. The class starts well before the park opens in the morning.

The classes are generally small, and the teachers take time to help you perfect your form so you’re standing on the surf board before the class ends.

Both Blizzard Beach and Typhoon Lagoon offer you the opportunity to rent a cabana. Renting a cabana by yourself or with a small group of friends will make you feel like water park royalty for the day!

Each cabana comes with a cooler of drinks, a smaller locker for valuables, and someone to help you get snacks and drinks throughout the day.

Just outside of the gates to Blizzard Beach is a super cute mini-golf course! The course is based around Santa’s visit to Walt Disney World over summer, and it’s called Winter-Summer Land Mini Golf.

If you’re looking for a fun evening outside of the parks or to challenge a few friends this is the spot to be.

Ready to start planning your next Disney vacation? Listen to the latest podcast episode on Apple or on your non-Apple device now!

Disney Springs is Disney’s entertainment and dining district. It’s often open well into the night on the weekends and offers a variety of things to do for adults.

Disney Springs has a wide variety of restaurants, but one we cannot recommend enough is Wine Bar George.

This restaurant features an extensive wine list, which you can then turn into your own personal wine tasting with guidance from the sommeliers that work at Wine Bar George!

Disney Springs is home to a full sized bowling alley called Splitsville. This spot is great to grab a bite to eat and play a few games of bowling on those warm afternoons in Orlando.

If you’re going to to order something to eat, we recommend their sushi or loaded fries!

21 – Step Into Your Favorite Stories Through Virtual Reality

Virtual reality experiences have become a major trend when traveling, and Disney Springs has their own virtual reality space in The VOID.

Here you don a VR helmet and vest, and you can step into one of two worlds, Star Wars or Wreck It Ralph. The experiences are hyper-realistic, and last about 45 minutes.

As you can, there are so many unique things for adults to do at Disney World. Let us know which one you were the most surprised by in the comments section below.

UP NEXT: Best Restaurants for Adults and Solo Travelers at Disney World

Scroll back to top
20shares