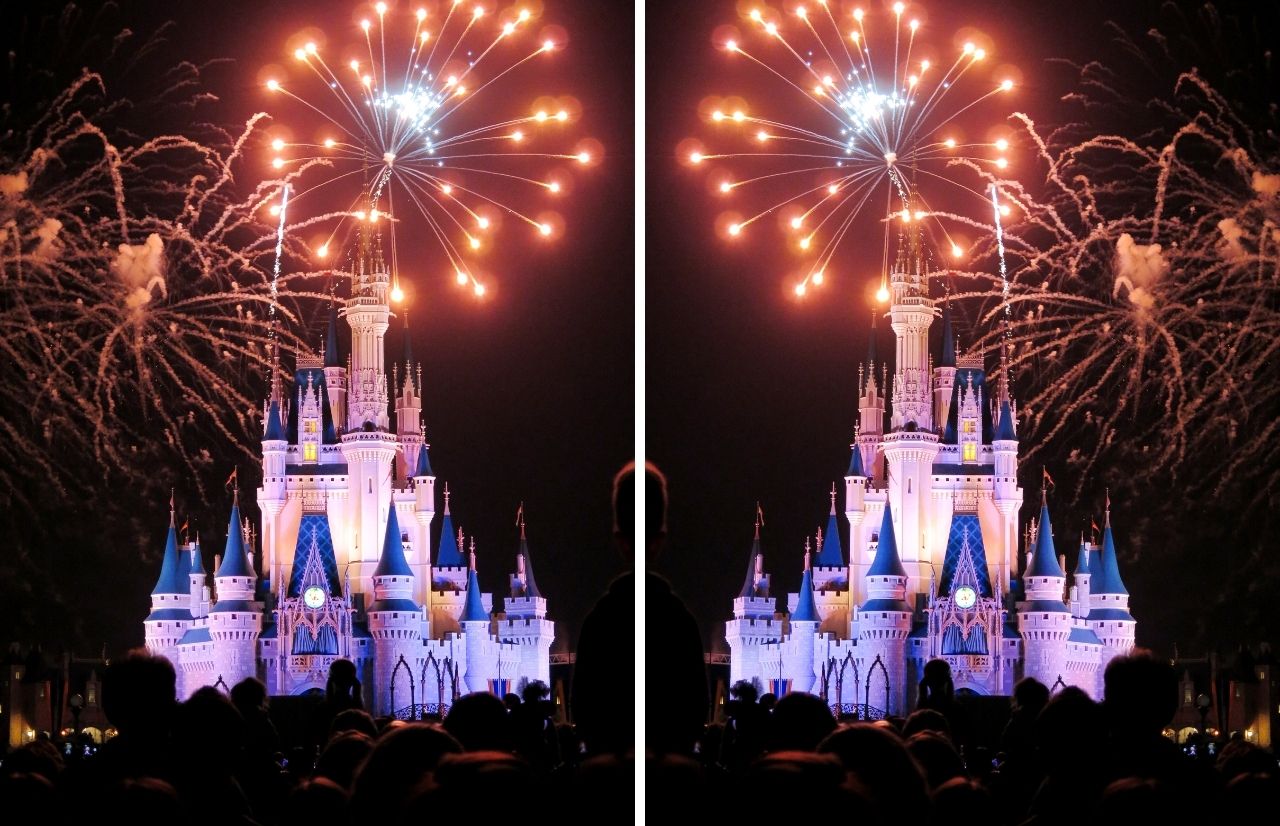 Do you want to know what the BEST Magic Kingdom shows are for your upcoming trip to Disney?

Well ThemeParkHipster, you already know when it comes to the title of “The Most Happiest on Earth” – Disney’s Magic Kingdom in Orlando, FL takes the cake.

And that’s not just because the Disney Parks and Resorts in Orlando, FL are the biggest in the world – it’s also because of the endless choices when it comes to Magic Kingdom entertainment.

Truly, if you wanted to spend an entire park day at Magic Kingdom just watching shows – you could!

So without further ado, let’s get to it!

Starting off our BEST Magic Kingdom shows list is Enchanted Tiki Room! Built in 1971, this classic animatronic show shouldn’t be missed by any true Walt Disney fan. Why?

Well, because the first version of it was imagineered in Disneyland, California in 1963 under Walt Disney’s personal supervision, and was the first audio-animatronic ride EVER!

At any rate, if you’re one for those #ClassicDisneyFeels types (like the die-hard Disney fan who just can’t pass up Carousel of Progress), then this Polynesian inspired musical theatre in the round experience can’t be missed!

You are seated on benches surrounding a stage where over 150 animatronic birds, totem poles, flowers, and the like sing a collection of energetic, tropical songs…and tell some corny jokes too!

Next up on this BEST Magic Kingdom shows list is another audio-animatronic style show – Country Bear Jamboree!

Located in Frontierland, this show is very similar to Enchanted Tiki Room, except swap out birds for bears, and tropical music for country music!

Next up on our Magic Kingdom shows ranking is yet another indoor theater style show – Hall of Presidents.

This animatronic show can be found in Liberty Square and was Walt Disney’s personal idea, to honor all the optimistic leaders of America.

With a mix of projections, narrations, and animatronic US Presidents, this show quite literally takes you through the history of America.

It starts way back in 1773 and ends in present day, spotlighting each President of the United States – so YUP look out for President Joe Biden’s appearance!

I’m SO excited to talk about this next show on this list, because Magic Kingdom Entertainment updated this show to include Disney Pixar’s Coco back in November of 2021!

The new scene follows the “I Just Can’t Wait to Be King” segment of the “Lion King.”

Honestly, this update makes perfect sense because the premise of this 3D virtual show is that Donald Duck is conducting a magical orchestra.

This adventure transports him through the classic music scenes of your favorite Disney movies, like Beauty and the Beast, The Little Mermaid, The Lion King, and Aladdin.

And not only will you find yourself laughing, singing, and dancing in your seat, but odds are you’ll be impressed by the WORLD’S BIGGEST 3D movie screen – at 150 feet wide!

Next up on our BEST Magic Kingdom shows list is an ACTUAL live show – making it one of the most magical!

In this musical show, you’ll watch Mickey, Minnie, Rapunzel, Flynn, Tiana, Naveen, Anna, Elsa, Olaf and friends sing, dance, and learn about friendship all up on the castle stage!

And just to give you a sneak peak of why it shouldn’t be missed: the costumes are on point, the music is catchy, and if you stick around till the end, you might even see some heart melting fireworks!

Soon to turn 10 years old, this is probably one of the most unique experiences when it comes to Magic Kingdom entertainment; because it’s half interactive show, half meet and greet.

What do I mean by that? Well, you are guided throughout the Beast’s Castle, only to find Belle herself in the library in her classic golden ball gown.

From there, Belle calls on audience volunteers to play different “parts” in a live retelling of how she met, and fell in love with, the Beast.

Finally, at the end, you even have a chance to take a posed photo with Belle, making this a pretty productive use of park time…

Can you say magical show and photo-op in one?!

…Definitely one of the BEST Magic Kingdom shows available in the park, especially if you love acapella!

Is your aesthetic dad jokes and live interactive comedy? Then Monsters Inc. Laugh floor is the Magic Kingdom entertainment pick for you!

In this show, guests are led into a theatre with 400 seats and a larger than life movie theatre screen where Mike Wazowski, Roz, and friends tell jokes in real time too!

However, the jokes are told at the expense of the audience members to fill up as many laugh canisters as possible!

Ok #2 on the BEST Magic Kingdom shows list really is a must-do, at least once! And that’s because Magic Kingdom’s whimsical Festival of Fantasy Parade really is just jaw-droppingly gorgeous!

From regal, royal dancers, to a fire-breathing dragon, to Mickey, Minnie, and friends, this parade has plenty of magic to go around!

The Festival of the Fantasy Parade now ventures through the park twice daily, offering you the opportunity to see the majestic fire-breathing Maleficent dragon.

Do keep in mind though, the full parade is weather permitting and the Magic Kingdom entertainment team will do everything in their power to run the full parade.

However, dangerous, wet conditions sometimes lead to a more limited version of the parade, where floats are replaced by cars and carriages.

Cavalcades at the Magic Kingdom

In addition to Disney Festival of the Fantasy Parade, you also enjoy the smaller versions of this type of entertainment in the Magic Kingdom called cavalcades.

At the Magic Kingdom, you can enjoy the following cavalcades:

What to Know About the Magic Kingdom Parade

Topping off this BEST of the BEST Magic Kingdom nighttime shows list is actually one of the newest Magic Kingdom entertainment offering!

Disney Enchantment Fireworks Show debuted in 2021 and has been wowing guests ever since.

Classic Disney songs, gorgeous castle projections, and of course, fireworks light up the sky and your heart at this nightly entertainment offering.

Beware though – this is one of those Magic Kingdom shows that will give you GUARANTEED chills! So pack some Kleenex!

Tips for Making the Most of Magic Kingdom Shows

Now that you know what the best shows at the Magic Kingdom are, let’s go over a few tips to make you have a wonderful day.

Remember ThemeParkHipster, we ranked the Magic Kingdom shows by quality, not location. So when deciding which shows to go to, do it based on proximity.

This will save you LOTS of time and steps in the long run – trust us.

So what’s my recommended plan of attack?

Start your day at the ride you want to go on the MOST, and then continue your way around the park in a circle, rotating around Cinderella Castle.

2. Get Seating Ahead of Time, When Possible

This tip goes for the Festival of Fantasy Parade, Mickey’s Royal Friendship Faire, and Disney Enchantment Fireworks Show specifically, since these are the BEST Magic Kingdom shows that draw a big crowd and have no official seating.

Basically, I’d recommend scoping out a seat/spot for any of these outdoor shows 30 to 40 minutes before they begin.

Grab a snack, find a curb in the shade, and be thankful when you see guests fighting for a spot two minutes before the show starts!

Oh, and bonus pro-tip for Festival of Fantasy Parade: Watch it from Frontierland. This is where the parade starts, so you’ll see the entirety of the parade by 3:20 p.m., and can go right back to park hopping while others further down the parade route won’t even start seeing the parade until 3:30-ish p.m.!

Ok Hipster, this is an INSIDER tip, so listen close!

Before choosing your seat at any indoor show, like the Enchanted Tiki Room, Enchanted Tales with Belle, or The Hall of Presidents, we HIGHLY recommend sitting next to the exit.

Why? Because when the show comes to an end, you’ll be one of the first ones out, saving precious theme park time and aggravation!

Cuz let’s be honest, those theme park crowds can be brutal – and any time saved is time earned!

What to Know Before You Go to the Magic Kingdom

Now I’m going to answer some of the most commonly asked questions when it comes to spending a day at the Magic Kingdom.

Is Magic Kingdom the only park with entertainment offerings?

Absolutely not! Disney Parks and Resorts pride themselves on their amazing entertainment offerings, both in and outside of the parks!

Some other shows you won’t want to miss on Disney World, Orlando FL property are:

Can I take photos or videos during Magic Kingdom shows?

Absolutely! Photos and videos are definitely permitted during Magic Kingdom shows, as long as the flash is off and you’re not being otherwise loud or disruptive.

Is there time to get EVERYTHING done at Magic Kingdom in just one day?

With over 10 shows, 40 rides, and 25 character meet and greet opportunities…no, you can’t exactly get 100% of Magic Kingdom done in one day, but you can definitely do A LOT!

If you arrive at park open and plan your day out right, odds are you’ll get all of your MUST – DOs crossed off your list, and THEN some!

Well ThemeParkHipster, hopefully our ranking of the BEST Magic Kingdom shows helps you better plan out your next Magic Kingdom park day!

But now, YOU’VE GOT to let us know in the comments below: Which of the Magic Kingdom shows is your favorite? Did we leave out any awesome Magic Kingdom entertainment offerings?

Let us know in the comments below; because ThemeParkHipsters plan better, together!