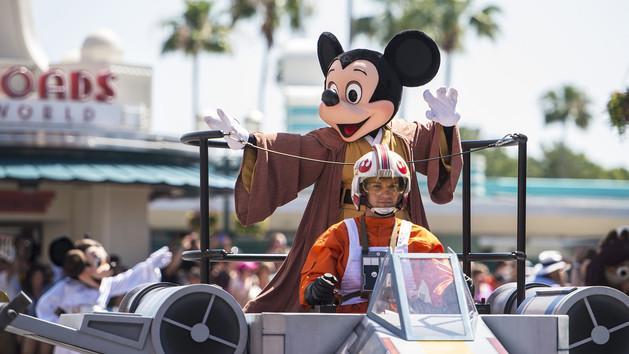 Every year Star Wars fans around the world come together to celebrate May the 4th, or Star Wars Day, which is lovingly dedicated to everything from a galaxy far, far away.

Star Wars fans have had a lot to celebrate recently like the adorableness of The Child, aka Baby Yoda, new Star Wars series coming to Disney+, and the opening of an entire Star Wars-themed land at both Walt Disney World’s Hollywood Studios and Disneyland Park.

If you can’t make it to Walt Disney World, Disneyland, and don’t feel quite comfortable going to a movie theater to watch old Star Wars movies, there are plenty of ways to celebrate Star Wars from home.

We’ve rounded up our top five ways to celebrate May the 4th without leaving home.

One thing we love doing, whether it’s May the 4th or just a day we need a little extra boost is Disneybounding. The idea is to make an outfit that resembles a Disney character out of pieces you already have in your closest.

On May the 4th we love bounding as our favorite Star Wars characters.

For instance, if you have a white dress or jumpsuit, and pair it with a silver belt you can bound as Princess Leia.

If you’re going for a more sinister look, consider a pair of black jeans, a black shirt, and some red accessories for a street style Kylo Ren outfit.

The sky really is the limit when it comes to bounding. After you’ve assembled your outfit you’re definitely going to want to post a photo of it on Instagram to share with the official Disneybound account!

2. Have a movie or Disney+ marathon

There’s nothing like reliving iconic moments in Star Wars by having a movie marathon. If it were up to us, we would skip through some of the prequels, but watch whatever Star Wars movies you love best.

If you’ve recently watched all of the Star Wars movies, consider watching some of the shows on Disney+ like The Mandalorian, The Clone Wars, or Star Wars Rebels.

Many of the characters you know from the movies make appearances in animated forms in the latter two, which is always fun to see.

3. Watch The Bad Batch on Disney+

Disney+ is debuting a new Star Wars animated series called The Bad Batch on May the 4th. The series will follow a group of clones that had some modifications made to their genetic code to make them different from the rest of their clone brothers.

If you’ve seen The Clone Wars season seven, then you’ve already been introduced to the characters of The Bad Batch.

However, if you’re behind on The Clone Wars then you’re going to want to catch up before watching the new show.

The Bad Batch premier will be over an hour long and recurring characters from other series like Fennec Shand, Saw Gerrera, and General Tarkin.

One of the most fun things to do on May the 4th is to eat Star Wars-themed food throughout the day. This will definitely take a little planning but it will be worth it to have a fully themed day around the famous franchise.

For breakfast start off with a glass of blue milk and a character themed smoothie bowl. For lunch consider trying your hand at a homemade version of a rondo wrap from Star Wars: Galaxy’s Edge.

When it’s time for a snack bantha cookies from inside Oga’s Cantina at Star Wars: Galaxy’s Edge are the way to go.

For dinner, consider getting creative with what you think someone might eat in Star Wars. If you love food and cooking this is a great way to play with flavors of old stand-by dishes!

As with most recipe dupes, almost anything from the Disney Parks can be found online with a quick Google search. For all of these recipe ideas just dig around a little bit until you land on a recipe you actually want to try.

There are a ton of Star Wars books out on the market right now, no matter if you’re looking for something for yourself or someone else in your family.

For those looking for Star Wars stories outside of the theme park land try reading some of the new stories from the Star Wars: The High Republic saga. This storyline has multiple books and comics with new characters, planets, and adventures, all set in the Star Wars universe.

Are you celebrating May the 4th at home?

Let’s us know how you plane to commemorate this special Star Wars Day down in the comments section below.