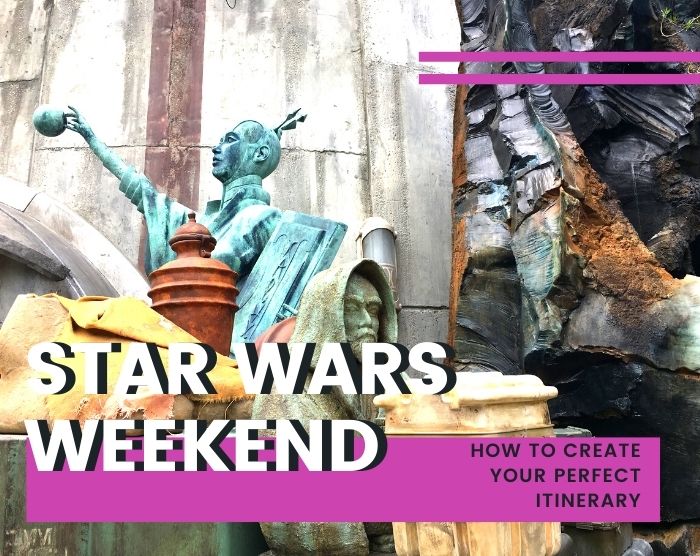 Have you ever wanted to have an epic Star Wars weekend at Disney?

Star Wars fans have been flocking to the Disney Parks since the opening of Star Tours in 1987.

Fast forward to this year and fans of a galaxy far, far away have even more to experience inside the Disney parks thanks to Star Wars: Galaxy’s Edge at Walt Disney World and Disneyland.

If you’ve ever thought about an ultimate Star Wars weekend at Walt Disney World or Disneyland you’re in luck! Here at ThemeParkHipster we’ve come up with the ultimate two-day itinerary for Star Wars fans.

The best part is everything we’re suggesting can be done at both Walt Disney World and Disneyland.

Day One of Your Star Wars Weekend

The first day of your epic Star Wars weekend is going to consist of trying to get a boarding group for Star Wars: Rise of the Resistance, munching on Star Wars themed snacks, and even seeing a few of your favorite Star Wars characters.

Morning Arrival on Day One:

After checking in at your hotel you’re going to want to head straight to Disney’s Hollywood Studios (Walt Disney World) or Disneyland Park (Disneyland Resort) depending on what coast you’re on.

The first priority of the day is to try to snag a coveted boarding pass for Rise of the Resistance!

This is the only way to ride this attraction so doing it in the morning is imperative. The only way to do this is through either the MyDisneyExperience app (Walt Disney World) or Disneyland app (Disneyland Resort).

Once you get through and make your boarding passes head straight for Star Wars: Galaxy’s Edge and mobile order breakfast from Ronto Roasters.

The best thing to order here for breakfast is the morning rondo wrap, which has sausage, eggs, cheese, and a spicy sauce all wrapped up in warm bread!

After breakfast hop in line for Millennium Falcon: Smugglers Run. This morning and late evening are the best times to ride this since that’s when the lines will be shortest.

While you cannot request a position, you can trade with other guests who are riding with you. The prized position is pilot but it’s also fun to be engineer in the back of the Falcon!

Afternoon on Day One:

It’s finally afternoon and you’re not leaving Galaxy’s Edge just yet! It’s time to stop by the Droid Depot to make your own customized BB or R2 droid. The Droid Depot has a limited amount of spots each day so you’re going to want to make a reservation for this.

After checking in and having a Cast Member take you over to show you how to pick out your parts you’re ready to assemble. This is where things get even more exciting.

Once you put your droid together you get to activate it and see it come to life. Your droid is then put in a box or a backpack and you’re sent on your way.

These droids are super fun and have the capability to interact with different things around Star Wars: Galaxy’s Edge. They beep, buzz, and move depending on where they are in the land.

If you spot a Resistance fighter your droid might beep with glee, but if you’re near Kylo Ren’s ship then it might buzz in fear.

After building your droid you should head over to the Star Wars Launch Bay. This is a great spot to cool off, see some neat Star Wars models and take a few photos with your favorite Star Wars characters.

Since breakfast was probably late skipping lunch in lieu of a big dinner is a good idea on day one!

If you do want something to munch on grab a classic Disney snack to curb your appetite before heading back into Star Wars: Galaxy’s Edge in the evening.

Evening on Day One:

As the sun begins to set your boarding group is probably just getting called. You’re going to want to head straight for the entrance of Star Wars: Rise of the Resistance when you get the push notification that it’s your turn to ride.

Once inside the queue you will not be able to leave and return at later time so be sure you’ve refilled your water bottle and gone to the restroom. The line can be long even with the boarding pass system.

There’s not going to be spoilers here, so you’ll just have to trust us when we say that Star Wars: Rise of the Resistance is worth the wait.

After hopping off the attraction head over to Docking Bay 7 Food and Cargo to grab dinner. This quick service restaurant is treating visitors to foods inspired by the Star Wars saga.

Items we love is the plant-based meatballs, shrimp and noodle salad, and the raspberry cream puff!

This should be the end of your night at either Disney’s Hollywood Studios or Disneyland Park since you’ll have another early morning on day two.

A perfect day to start your EPIC Star Wars weekend!

Day two is the time when you’ll get to finish up exploring Star Wars: Galaxy’s Edge and be able to do even more Star Wars experiences outside of the immersive land.

Get to the park as early as possible and try to snag another boarding pass for Star Wars: Rise of the Resistance. After hopefully riding it the night before you’ll know why we’re saying this!

After getting the boarding pass head over to Star Tours to take a flight around the galaxy with your pilot C-3PO.

Star Tours has a lot of new variations and scenes so riding it a second time early in the morning before the park gets crowded is a good idea. After you’ve had your fill of galactic flight you’ll probably be hungry.

For breakfast Docking Bay 7 Food and Cargo is a good option. The quick service restaurant only serves breakfast for a short time each day, so be sure to check hours before committing to eating here.

We love the overnight oats and the breakfast platter.

After breakfast hopefully your boarding group will be called and you can ride Rise of the Resistance again.

The second afternoon is when you might start to feel like your time is running out, but you still have a lot to do.

Don’t worry because you’ve already hit all three major attractions, eaten inside the restaurants of Galaxy’s Edge and seen some characters so there’s only a little bit left to do.

The first thing you should be planning to do this afternoon is to build your own lightsaber at Savi’s Workshop. This is one of the best experiences at Star Wars: Galaxy’s Edge and well worth the time, money, and fight for a reservation.

This experience is about an hour from start to finish so the afternoon is the best time to do it so you don’t miss your appointment time and gives you a break inside where it’s cool during the warmer days.

After building your own lightsaber you’re going to want to go over to Oga’s Cantina. This bar has some of the best drinks at a Disney park right now, and is a lively spot to chat with other visitors or enjoy a snack before heading back out into the park.

Our go-to drink order is either the Outer Rim or the Dagobah Slug Slinger.

Grab lunch at Ronto Roasters and get their traditional ronto wrap or if you’re at Disneyland Park consider getting the asian-inspired plant-based ronto wrap!

Before heading out to go back home take one last ride on Millennium Falcon: Smugglers Run and try to get pilot if you weren’t able to get that on day one. This is also a great time to explore some of the smaller shops inside Star Wars: Galaxy’s Edge.

If you’re looking for a snack to take on the car ride home with you consider grabbing a bag of Outpost Mix from Kat Saka’s Kettle.

This little stand inside the marketplace of Star Wars: Galaxy’s Edge is tucked away in a corner so you’ve probably passed it and didn’t even know. The popcorn is a mix of two flavors but is so tasty!

Wrapping up your Star Wars weekend…

In the midst of all your adventures, if it does go great, then perfect! But if it does not then there’s still plenty of opportunity to have fun with an altered schedule.

UP NEXT: Everything You Need To Know About the Rides Inside Star Wars: Galaxy’s Edge