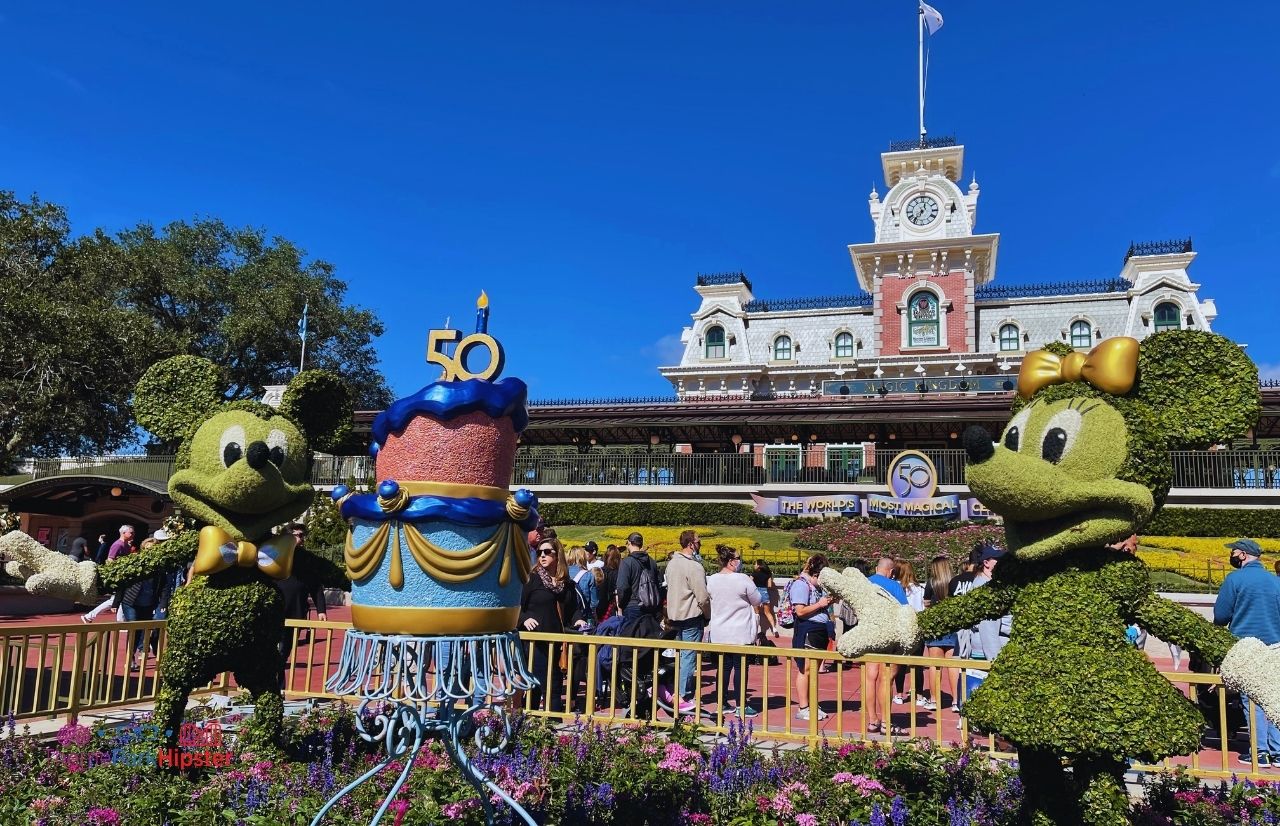 Are you trying to figure out the best way to do the Magic Kingdom on your Disney vacation?

Magic Kingdom Park at Walt Disney World is the most visited theme park in the entire world. That means it can be very busy, and going in without a plan is a certain recipe for disaster.

But with a few helpful tips and tricks, you can create the perfect one-day Magic Kingdom itinerary, see and do everything you want, and not feel like you’re rushing around the park not actually enjoying it.

What to Expect at Magic Kingdom Park

Magic Kingdom Park is the most popular Walt Disney World theme park, after all, it does have all of the classic attractions like Haunted Mansion, The Jungle Cruise, and Pirates of the Caribbean.

So walking into the park prepared for the day will allow you to get a head start over most of the other guests in the park that day.

Throughout the year opening times at all four Walt Disney World theme parks vary. Most of the time Magic Kingdom opens at 9:00 a.m., but there are some busier times like Christmas, Easter, and New Year that the park will open at 8:00 a.m.

The best way to know what time the park opens is to check the My Disney Experience app. This will show the most up-to-date park hours all in one convenient spot.

How expensive is it to go to Magic Kingdom Park

A single-day, non-park hopper ticket to Magic Kingdom Park starts at $109 and goes up based on the day and if you want to add park-hopping availability.

Purchasing your tickets in advance and linking them to your My Disney Experience app before you arrive at Magic Kingdom Park will allow you to skip the long lines at the ticket booths.

The best way to do the Magic Kingdom and to get everything on this one-day itinerary done is to arrive at the park early and stay late.

If you’re staying at a hotel that offers early entry or late night hours utilize them. Plan to arrive at least an hour and 30 minutes before the official opening of the park.

If you’re staying at any Walt Disney World hotel you get 30 minutes of park time before regular non-resort guests.

So that means you can hit some of the big rides like Space Mountain starting at 8:30 a.m. If this is the case plan to be at Magic Kingdom by 7:00 a.m. so you can be near the front of the pack to get to your destination.

After you’ve been let into the park you’ll need to decide where to head first. As a Single Rider, I always go to Tomorrowland first, but if you’re traveling with kids you’ll want to go to Fantasyland first.

With this itinerary, I’m assuming you’re staying at Walt Disney World and are taking advantage of the 30 minute early morning park time.

3. Ride the Top Rides in Tomorrowland

Those starting in Fantasyland will want to get in line for either Peter Pan’s Flight or Seven Dwarfs Mine Train since those are the two most popular rides in the area.

Both of these get long lines even in the morning so be sure to plan for this. If you can, do one then do the other right away. Your afternoon and evening time will thank you.

5. Head Over to Frontierland

It’s now between 9:00 a.m. and 9:30 a.m. and the park is open for regular guests. It’s starting to get busy and there’s one more big place to go before you can finally slow down for the morning.

After completing your first set of rides, you’ll want to head immediately to Frontierland and get on Splash Mountain and Big Thunder Mountain Railroad. This is one of the best ways to do the Magic Kingdom.

These two attractions are very popular, and the lines can often reach well past the regular queue. This should take you to about 11:00 a.m., especially since Splash Mountain is a longer ride at about 20 minutes.

6. Have Lunch at Sleepy Hollow

Just a short walk away from Frontierland is Sleepy Hollow, a fun quick-service spot that’s become one of my favorites for lunch. The line here does get long quickly, but it moves fast since the menu is somewhat limited.

Refueling here often leads me to get a Hand-dipped Corn Dog or a Spicy Chicken Waffle Sandwich and a Sprite. There’s plenty of seating with a view of Cinderella Castle or just around the corner in Liberty Square.

Afternoons at Magic Kingdom can be hectic. It’s the busiest time of the day, but you can still do a lot if you know where to go.

Liberty Square is where you’ll find the Liberty Square Riverboat that takes you around the Rivers of America and the iconic Haunted Mansion attraction. Both of these are nice afternoon rides. Both are relatively calm and the views from the Riverboat can’t be beaten.

After completing both of these attractions, head over to Tom Swayer Island where you can explore caves, barrel bridges, and old huts, or just find a rocking chair and take in the sights and sounds of Magic Kingdom.

This is a great spot to relax in the heat of the day, or if you just need a break from the crowds.

Parades are back at Magic Kingdom, so be sure to find a spot for Disney’s Festival of Fantasy Parade.

To know what time the parade is currently showing, check the My Disney Experience app. You can view the parade from most places in Frontierland, Liberty Square, the castle hub, and down Main Street U.S.A.

10. Grab a Dole Whip in Adventureland

By this time you’re probably getting pretty tired and in need of some places to sit down and enjoy some air conditioning.

This is the prime time to head to Adventureland and get a Dole Whip and eat it while waiting in line for Walt Disney’s Enchanted Tiki Room.

The adorable show is one of my favorite spots in all of Magic Kingdom.

11. Have a Swashbuckling Adventure on Pirates of the Caribbean

Then walk over to Pirates of the Caribbean, where you’ll enjoy a 20-minute boat ride through some of the most iconic ride scenes in any Disney Park.

12. Take a Ride on the Jungle Cruise

If you really want to round out Adventureland, then get in line for the Jungle Cruise, but by now the line is going to be very long so you may want to wait for this until later in the evening.

13. Eat One of the Famous Disney Snacks

As you exit Adventureland to the castle hub, stop at the Spring Roll Cart to get one of the infamous Hamburger Spring Rolls. These crispy fried treats are a fan-favorite Disney Snack!

14. As the Evening Starts, Enjoy the Remaining Attractions

The sun is starting to set, but there’s still plenty to do at Magic Kingdom. Depending on where you started in the morning, you’ll want to do the opposite now.

It’s likely that big rides like Space Mountain and Seven Dwarfs Mine Train have longer lines, but they will die down as the night goes on.

Consider doing some of the smaller attractions like The Mad Tea Party and the Tomorrowland Transit Authority People Mover first.

15. Find your spot for the fireworks

While the best spot to view Disney Enchantment is from the front of Cinderella Castle, I actually prefer to be on either side or behind the castle.

Not only are the crowds smaller, but you can see fireworks going off all around you. It’s a really unique thing that not many people take advantage of.

16. Know How to Prep Yourself for Leaving the Magic Kingdom Park

Leaving the park is often the worst part of the day, not just because you’ve been surrounded by magic and now you have to exit, but everyone else is doing the same thing.

Take your time leaving the park and casually stroll through some of the shops in the park. All of the stores along Main Street U.S.A. stay open one hour after the official park closing, so this is a good time to browse The Emporium.

17. Hop on Your Favorite Form of Transportation

Once outside the gates, you can take the monorail, ferry boat, or sometimes a bus back to the Ticket and Transportation Center to walk to your car.

All options will be pretty busy at this time, but we recommend using the ferry boat to leave.

Final Thoughts on the Best Way to Do the Magic Kingdom

A day at Magic Kingdom Park is filled with exciting attractions, great food, and of course plenty of Disney nostalgia.

Whether you’re flying Dumbo solo or riding the teacups with friends and family, there’s so much to do that you might need a second day to really do it all.

Now it’s your turn, what’s your favorite thing to do at the Magic Kingdom? Let us know in the comments section below.

UP NEXT: Magic Kingdom for Adults the Complete Guide