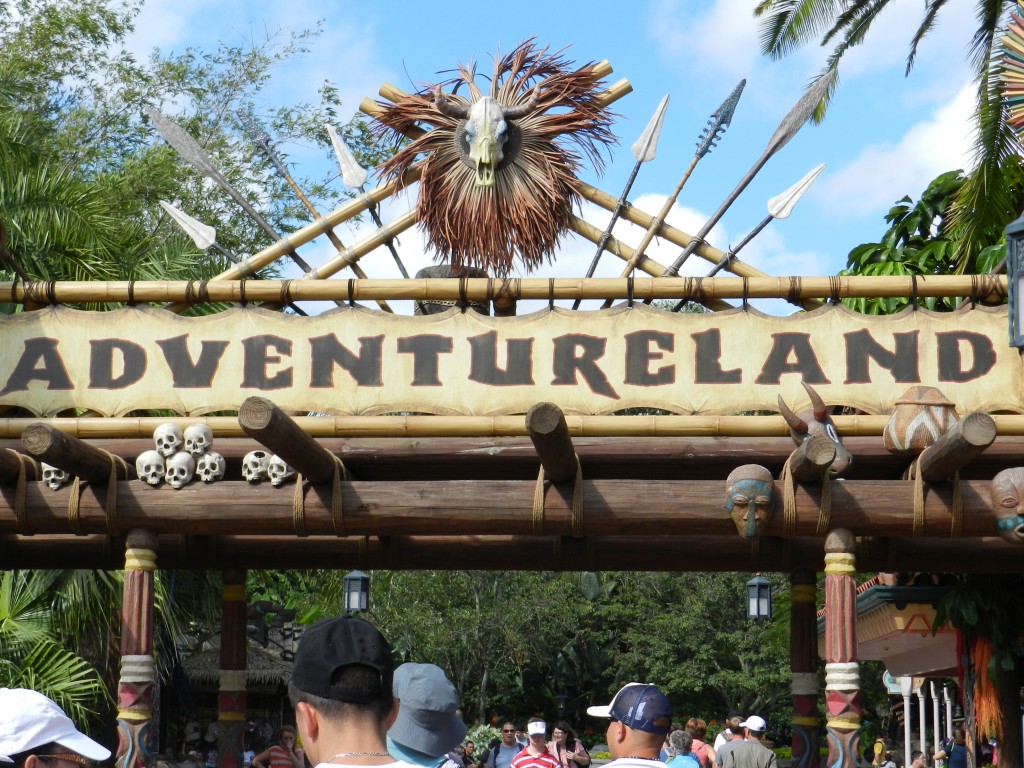 Even saying the word makes you excited doesn’t it?

I want to strap on a backpack, get on a random cruise ship and land in the middle of a forgotten tribe in an undiscovered island. (Sorry for quoting like fifty Disney movies).

You don’t have to go far. We’ll just settle on going to Adventureland at Walt Disney World. So now that that’s decided, let’s play the ‘Which ride is the first ride?’ game!

But first, we need to know everything we can about the rides at Adventureland. Here are the five Adventureland rides we are going to explore:

Ooooh, they all sound so exciting! Let’s not waste another minute and jump right in!

Let’s go through a few things that you can expect to see on your visit.

Here’s a ground-breaking idea: A Disney-themed bird play-circus-musical made fancy. At least, I think that’s what the Disney Imagineers thought when they came up with the Enchanted Tiki Room.

All I can say is the Enchanted Tiki Room is a classic Disney extravaganza and a perfect place to take a break from the Florida heat.

History of The Enchanted Tiki Room

Ooooh! It’s time for some controversy!

Once upon a time (1963 to be exact), the Enchanted Tiki Room (or Tropical Serenade as it was called then) took Disneyland by a storm.

The Enchanted Tiki Room would then be brought over to the Magic Kingdom theme park on opening day in 1971.

But.. (cue dramatic music) after a while, attendance fell. Disney did not want to let go of this beautiful attraction so they shut it down for refurbishment in 1997.

When they reopened the ride a year later, the storyline had changed completely. They had renamed it the Enchanted Tiki Room (Under New Management). Using the newly released popular characters Iago and Zazu as the ‘new managers’, they tried to bring more ‘spunk’ into the ride.

How did generations of Enchanted Tiki Room lovers react to this?

They said (and I quote) “They ruined it”.

Anyways, some people actually liked this new version. They were mainly the younger generation who had not seen the previous one. But that didn’t save the show.

After the ride sustained damage from a fire in 2011, Disney shut it down again for more refurbishments. This time, they promise it will be the older version (with just a tiny bit of the new one).

2. Pirates of the Caribbean

Let’s take a journey into the tales of many men who have sailed the Caribbean seas!

Maybe Jack Sparrow’s timeless charm has something to do with how incredibly long the queues for this boat ride can get. He is, after all, swoon-worthy (if a little dirty).

The ride begins in a spooky half-submerged underground cave. The first stop? Why, the iconic Dead Man’s Cove, of course!

Once you have gotten past the eerie scene, hold your breath for the plunge in the dark. You are now in the midst of nasty battle. If you dare to peek in between cannon shots, you can see the legendary pirates causing havoc in the village.

The ride concludes with Jack Sparrow standing over his loot. But don’t worry, you will glimpse him all along the ride too.

What came first– the ride or the movie? You have two seconds to answer.

If you said the movies, you are WRONG!

Pirates (the ride) opened in 1967, long before the movie Pirates of the Caribbean– The Curse of the Black Pearl was released in 2003.

Today it is impossible to think of the ride, the Caribbean or even pirates without thinking of the movie franchise. But when elements from the movie were being added to the ride, not many people were happy.

It all worked out in the end– Pirates of the Caribbean became and remains one of the most popular Walt Disney World attractions and one of the great Adventureland rides.

Let’s know take a voyage through mysterious lands all over the world!

The Jungle Cruise ride takes you halfway across the world in ten minutes.

Your journey begins as you glide through Southeast Asia under the shade of the thick rainforest. You take a trip to India and pay your respects to Hindu deities in the Temple of the Forbidden Eye.

You can even bathe along with the elephants in the Sacred Indian Elephant Bathing Pool.

You’ll also journey to Cambodia and just escape the deadly currents around the ruined city.

You’ll row away to Africa and fight your way through a gorilla camp, past the lions’ den and narrowly miss the dangerous waters of the Schweitzer Falls. Look out for zebras, wildebeest and hyenas!

Finally, you float along the Nile. Watch out for the leaping piranhas! And try not to sell your head to shrunken head dealer Trader Sam.

If undertaking this enormous journey is scary, don’t worry. You will have your very own Skipper aka tour guide/bodyguard/accomplice. The Skipper swears to look after you.

It’s truly one of the BEST Adventureland rides.

The reason for building the Jungle Cruise was simple enough– a tropical vacation without the constant fear of mosquitoes.

But the way Bill Evans (Chief Imagineer Supreme) executed this tropical paradise was anything but simple for the original version in Disneyland.

After this popular attraction debuted at Disneyland, it’s popularity sparked Disney to open another version of it at the Magic Kingdom Theme Park on October 1, 1975.

Fun Fact: While waiting for the Jungle Cruise, look for the small hut. Believe it or not, the “straw” on the roof is actually metal.

Let’s trek up the famous Swiss Family Robinson Treehouse at the Walt Disney World in Florida.

Here is what you should really expect: exercise.

That’s right I said it. If you don’t want to climb 116 stairs (that’s 6 stories), steer clear of this ride.

Okay now that all the real Disney fans are still here, let me tell you something– the treehouse is freaking awesome. And you shouldn’t miss it!

As you walk up the stairs you will see all sorts of crazy contraptions the Robinsons came up with during their time being stranded at the island.

For example, there is a huge water wheel connected to a pulley system that goes all around the tree. A bamboo bucket collects water from the wheel and takes it upstairs!

And you get upstairs, the 360-degree view is absolutely stunning. You can peek through the leaves and see the entire park– especially Adventureland and the Jungle Cruise.

If you don’t remember the 1960 Swiss Family Robinson movie, it’s okay. You’ll still enjoy this Adventureland attraction. In the meantime, you can ask your parents about it. Or your grandparents– they probably read the book.

While Disney tried to maintain authenticity– the stairs are handcrafted, the rest of the treehouse is steel and concrete.

The treehouse has numerous rooms (including a bedroom with a hammock). It also has little details that tell the story of the Robinsons like parts of the ship that got wrecked.

Fun Fact: The first Swiss Family Treehouse in Disneyland was converted into Tarzan’s Treehouse. The one you can visit in Florida today is the still designed off of the original treehouse.

5. The Magic Carpets of Aladdin

Do you remember the bazaar scene in Aladdin? The spices in the air, people calling out wares and Middle Eastern music.

Well, that’s exactly what you will see on this ride, except from above. Just watch out for the spitting camel at the entrance.

The Magic Carpets of Aladdin ride comprises of a four-passenger magic carpet that flies through this colorful scene. The best part, however, is that the riders the in front get to control how high the carpet flies!

And don’t worry, you will see the legendary genie’s lamp. Or the giant size version of it (wink, wink).

This 90-second ride debuted in 2001 with a second one opening in Disneyland Paris called Flying Carpets over Agrabah.

The ride (sadly) has only one controversy to its name. It was scorned for being practically the same as the Dumbo the Flying Elephant attraction. I totally get the frustration and wished there was something more significant dedicated to the Aladdin franchise in Adventureland.

Whew! That was quite the ride!

And honestly speaking, I still have absolutely no idea which one to go to first. But I do know one thing for sure– I am not going to miss a single one of these Adventureland rides.

They all offer beautiful and fascinating experiences that you can not miss. But that’s me– the Disney nerd. You do you girl (or guy)! I hope you have a great time at Adventureland!

UP NEXT:  Magic Kingdom for Adults the Complete Guide