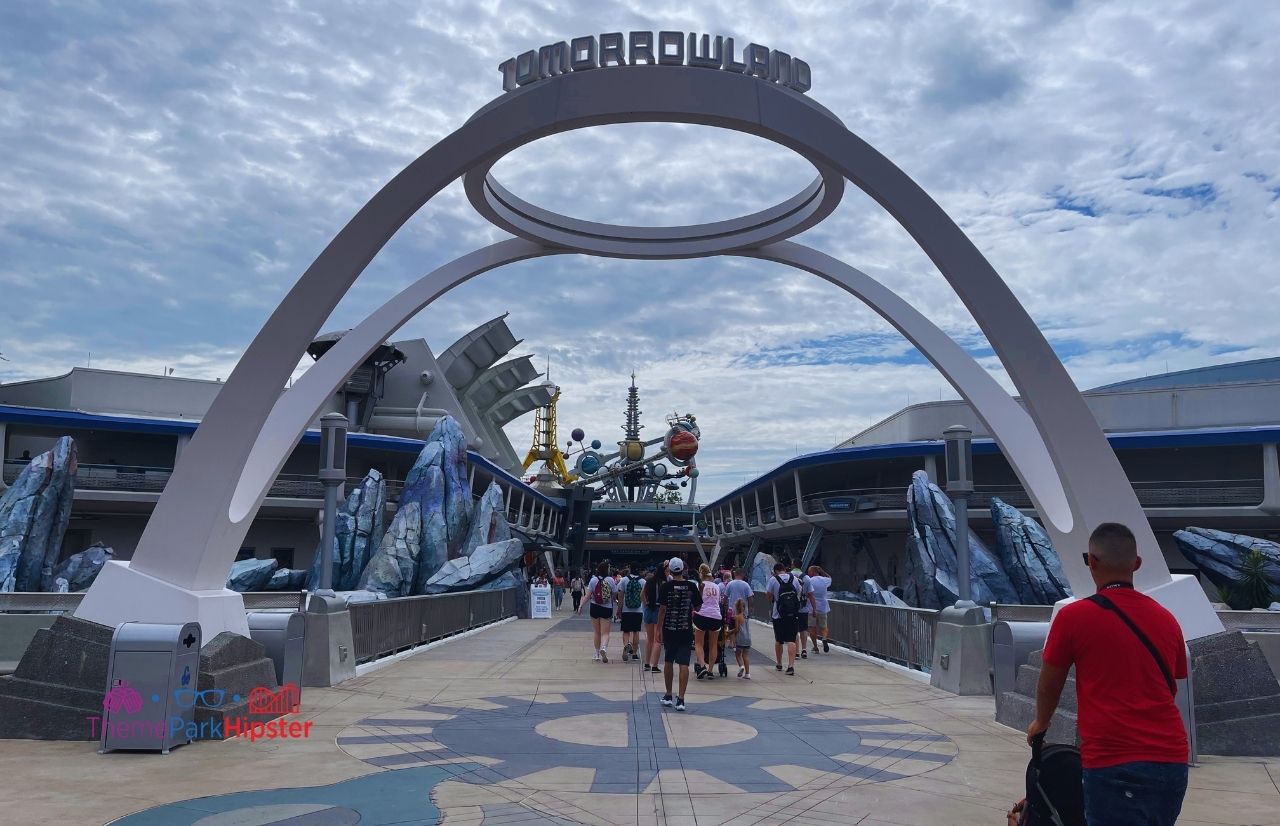 Picture it. You walk through the tunnel entrance that transports you into a whimsical world of yesterday, tomorrow and fantasy. You circle the flagpole hub, passing by Main Street Emporium’s windows, admiring the characters of your childhood.

Snow White dancing with the dwarfs. Aladdin and Jasmine soaring and tumbling through an endless diamond sky on magic carpet. Cinderella having her fateful waltz with her prince.

You anticipate reliving these memories and continue past the windows and around the corner.

Cinderella Castle in rose gold pink and fairy godmother pastel blues. Golden swirling ribbons along the very tops of the towers. The shining, shimmering 50th crest at the center of the beautiful castle.

As you stand in the castle hub, amongst the crowds of families, couples and friends going off on their own adventures. You stand there wondering where your own should begin?

And then you fall for the imagineers’ design and take a right towards the land of tomorrow. What awaits you there? Let’s find out!

History of Tomorrowland at Disney World

Walt Disney was known for his passion and views of what the future had in store for us. It was important that Walt Disney World would include its own Tomorrowland, similar to Disneyland’s.

The second Tomorrowland opened with Magic Kingdom on October 1, 1971 and was not completed. It was commented on as being very barren until it was finished in 1973.

When it opened, the only attractions open were the Grand Prix raceway and the skyway to Fantasyland.

The beloved and classic Space Mountain and Carousel of Progress would not make its debut until 1975, as the final plans for Disney World’s Tomorrowland were made in 1973.

To give you a better idea of how Tomorrowland and Magic Kingdom was as a whole, Tomorrowland Terrace was the biggest quick service location in the entire park.

At the time, Tomorrowland at Walt Disney World was very similar to Disneyland’s when it came to how it looked. It stood out with its geometric shapes and added to its sterile look with white paint.

Changes to Tomorrowland at the Magic Kingdom

Change would not come to Tomorrowland until 1994. Many attractions came and left during that era of old Tomorrowland, a total of seventeen.

Carousel of Progress, Space Mountain and Peoplemover stayed since they arrived in 1975 and still are there today. In 1994, the land was completely redone to resemble a galactic spaceport similar to Discoveryland in Disneyland Paris.

As of today, Tomorrowland has a more metallic look and feel to it, featuring darker shades of blues and purples.

The standout is the famous Purple Wall, located on the right hand side of the bridge between the castle hub and Tomorrowland after you cross. It is one of the most popular spots to take photos, occasionally having a PhotoPass photographer there.

To complete this change, Tron Lightcycle Run is currently being built near Space Mountain and a brand new entrance sign for the land was created and placed in September 2019.

As of now, there are seven attractions total, eight if you include Sonny Eclipse in Cosmic Ray’s restaurant.

Walt Disney World’s Tomorrowland Speedway debuted in 1971 as the Grand Prix Raceway. The attraction is supposed to be an international car race, originally sponsored by Goodyear.

As the era of New Tomorrowland came, the theming and name was changed two more times until it settled on its current name and theming.

Drivers can control the steering wheel and press on the gas pedal while being guided by a center rail along the race track. Adults must accompany children who are too small/short if they cannot reach the pedal and brakes are applied when the driver releases the gas.

Following behind Speedway was Space Mountain, Carousel of Progress and Tomorrowland Transit Authority Peoplemover, the latter two transported over from Disneyland.

Space Mountain at Walt Disney World is the original version. It has since been replicated at other parks as a classic mountain ride. Guests enter Starport Seven Five, home to Tomorrowland’s transport station to other galaxies.

You will then load into the trains that will take you through the super space tunnel and soaring through space at lightning speed!

Twists, turns and drops in the dark with only the starts to illuminate your way makes this an adventure to do again and again!

Carousel of Progress is extra special because it is the longest running stage show in American history as well as the oldest attraction in the resort.

It is one of the few to have been touched by Walt and created for the 1964 World’s Fair.

This attraction is very historical and cherished. Guests will be comfortably seated as they enjoy a 21 min journey through the 20th century as they explore the advancement of technology with the typical American family.

The catchy theme song written by the incomparable Sherman brothers will be stuck in your head all day long!

Recommended: 10 BEST Magic Kingdom Shows You Have to See!

Tomorrowland Transit Authority Peoplemover takes you on a 10 minute circle tour of Tomorrowland and all it has to offer!

You will have amazing views of not just the land, but Cinderella Castle too. You will get awesome views of Tron Lightcycle Run and enter Space Mountain, while getting views of Walt’s EPCOT Diorama and much more!

This is another relaxing ride, in addition to Carousel of Progress, which is beloved by frequent visitors.

Originally named “Star Jets”, Astro Orbitor as its now named, is a rocket spinner attraction that includes a center monument and planets so it appears that riders are bobbing and weaving in between them.

Similar to Dumbo in Fantasyland, guests can control the ascent and descent of the rocket with a mental control joystick.

This attraction can hold two guests and guests must use an elevator to get to the attraction where you will soar 60 feet above ground.

Buzz Lightyear’s Space Ranger Spin is amongst the most popular attractions in this land, doubling as an omnimover and carnival game ride.

Guests board the vehicle which has two laser guns and two joysticks. Your goal is to help Buzz battle Zurg and hit targets to score points. The targets are worth a different number of points, which will add up on your dashboard.

At the end, your total will determine what ranking you are, ranging from Star Cadet to Galactic Hero! Be sure to stop and take a look at your ride photo at the end too!

Lastly, the latest addition to Tomorrowland, which debuted in 2007, is Monsters Inc. Laugh Floor. This is an interactive comedy club that features characters from Monsters Inc and Monsters University.

It continues the story as the monsters use comedy to gather laughter instead of screams from guests. Guests can even submit their own jokes that could be told during the show by a monster.

Mike is the “Monster of Ceremonies” with Roz pushing him to meet his goal so it’s up to you to help him fill his canister with laughs to power Monstropolis!

Finally, it wouldn’t be a post about attractions without the iconic entertainment in Tomorrowland without sharing the talented and phenomenal, Sonny Eclipse and the Amazing Astro Organ.

Located in Cosmic Ray’s Starlight Cafe is a groovy alien who plays some out of this world tunes while you enjoy your galactic meal. Speaking of Galactic meals, let’s get into the grub the Tomorrowland has to offer!

Besides the fine entertainment inside the cafe, it is a quick service location that serves up bacon cheeseburgers, chicken strips and more!

It’s home to the Disney World 50th Specialty “Mission to Mars” burger and plant based options too. Mobile order is available for this restaurant and it opens at 10:30 a.m. daily.

If you are looking for something on the sweeter side, look no further than Auntie Gravity’s Galactic Goodies, a quick service location serving up ice cream floats, brownie sundaes, smoothies, shakes and more!

Your sweet tooth will be satisfied here, guaranteed! Mobile Order is not available at this location.

Next up, let’s blast off on Cool Ship! Here you can grab a stellar churro with chocolate dip and some thirst-quenching beverages.

Located near Peoplemover, you can grab a bite and sightsee with a snack!

Moving right along, we head towards The Lunching Pad at Rockettower Plaza. They are really getting into the anniversary spirit with their “If you had wings” and Walt’s Chili Cheese all beef foot long dog!

You can even snag the coveted 50th celebration Minnie Sipper here! Slushies, cocoa, pretzels and more await you here at this plaza located below Peoplemover. Mobile Order is available at this location which opens at 10 a.m.

Finally, we have landed at Tomorrowland Terrace Cafe. Rarely open, you can only experience this location currently if you are attending a Magic Kingdom 50th Celebration Dessert Party.

When available for quick service dining, it offers a plethora of chicken and fish combos and entrees! For details about pricing and availability for the dessert party, click here. But for now, let’s shop til we drop in Tomorrowland and see what kinds of goodies are available.

Shopping in a land where you can visit any galaxy is an absolute MUST, don’t you agree?

We should start at the exit of Space Mountain in Tomorrowland Light and Power Co, which sells apparel, MagicBands, Star Wars merchandise and accessories. There is a fuel rod location here as well, so you can swap out when necessary.

Another popular destination is Star Traders, which opens at 8am. Here you can peruse bagged snacks and treats, houseware like mugs, Mickey Ears, apparel like Loungefly brands, toys and plush and even cute souvenirs to take back to planet earth with you!

This shop features lots of Toy Story themed apparel, accessories, plush and toys that you can take home to commemorate the day you made the ranks in Buzz’s troop.

We have officially made it through our Tomorrowland Tour! In the meantime, here are some tips and facts that will make your visit to this galaxy even more stellar!

We have now landed once again on Earth and back into the land of yesterday, tomorrow and fantasy. Leaving the tomorrow that never was really allows guests to imagine what truly is in store for us as we advance.

That’s where EPCOT comes in, blending imagination and technological advancement to spark those dreams into a reality.

From visiting the first family of progress, to rising in the ranks as a galactic hero, to exploring galaxies via space travel and dining in a groovy, galactic cafe to stellar tunes, there is plenty to keep you entertained in Tomorrowland.

What is your favorite thing about Tomorrowland, one of the most iconic Disney lands after Fantasyland? Share with us in our Facebook Group!

UP NEXT: Come Explore the Adventureland Rides and Attractions at Walt Disney World!

Some Photos Courtesy of Canva.com