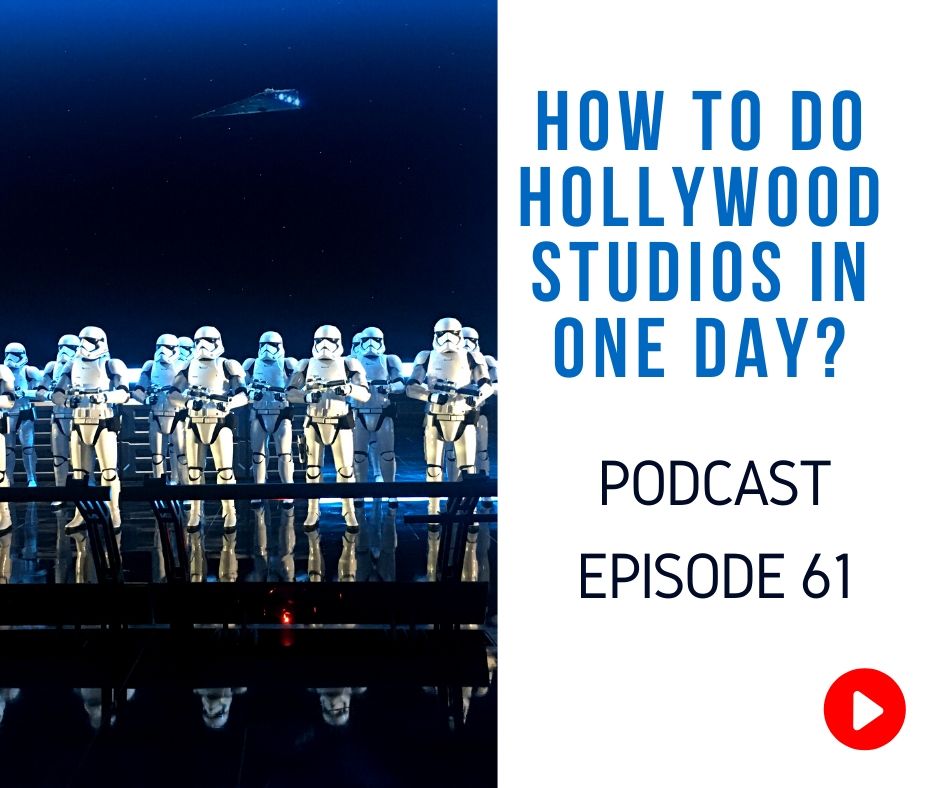 Do you know how to plan the perfect Disney Hollywood Studios itinerary for your trip?

Having a good game-plan helps in ensuring that you make the best out of your time.

In today’s episode, we are going to go over the best touring plan for your visit to Hollywood Studios that you can do in just one day.

Before we get into the itinerary, let’s look at two essential things you should do before the trip.

It would be best if you get to the park early on the day of your trip, especially with Star Wars: Galaxy’s Edge now open.

2 – Get Your Rise of the Resistance Boarding Pass

Once you are in, immediately grab your phone and head to the My Disney Experience App to make your boarding pass reservation for The Rise of Resistance ride.

This is an incredible attraction created by Disney Imagineering that you must not miss.

Next, head right over to Millenium Falcon: Smugglers Run where you have the opportunity to pilot the fastest hunk of junk in the galaxy.

Once you have discovered Star Wars: Galaxy’s Edge and had your breakfast, head over to the Toy Story Land.

At Toy Story Land, you’re going to want your FastPass reservation booked for a Slinky Dog Dash. Especially, if it is something you really want to experience.

If you haven’t been to Hollywood Studios, you have to do Slinky Dog Dash as your tier one. While you’re at Toy Story Land, you will want to get on the Alien Swirling Saucers and Toy Story Mania.

Hopefully, at this time, you’ll be able to head over to the Tower of Terror attraction and ride it without a long wait. The line shouldn’t be too crazy, but it may be about 35 to 40 minutes.

This ride is probably going to have a long queue than the one for Tower of Terror. If you are a solo traveler, you’re going to choose the Single Rider Line.

7 – Take a Break and Enjoy the Shows

Having explored most of Hollywood Studios, it is time for a little break. You might consider watching a show like Beauty and the Beast.

After the show, it’s time to grab something to eat. You might consider the Tune-In Lounge where it’s set in the fifties with mamma’s home-cooking.

After your stomach is full and your adult libations have you feeling good, it’s time to head over and watch Indiana Jones Epic Stunt Spectacular.

After enjoying the Indiana Jones Epic Stunt Spectacular, it’s time to ride Star Tours. If you have your FastPass, you can skip to the line. But if you don’t, you don’t have to worry too much about the line being crazy.

Disney recently updated some of the scenes from the recent Star Wars films which was a good addition to the attraction.

After your galactic adventure, you’re going to head over and watch the Muppet 3-D Vision Show. This will be a nice break from the Florida heat if it’s that time of the year, and it’s just classic Jim Henson creation.

After the Muppet 3-D Show, you’re going head over and watch The Little Mermaid Show.

Once you have enjoyed the Little Mermaid, it is now time to head over to Star Wars Launch Bay and meet some of your favorite Star Wars characters like Kylo Ren.

After that, when you’re coming out, you might catch the March of The First Order. They’re usually walking right in the center of Hollywood Studios.

Once you are done with your space adventure, go ahead and enjoy the Frozen Sing-Along. It’s a lot of fun and an excellent opportunity to take a break.

By now, it’s the perfect moment for you to have an early dinner. You can do this in two ways:

After your stomach is feeling good and you are feeling good, you can stick around and watch the fireworks show called the Star Wars a Galactic Spectacular.

If it’s still not too late, you could sneak back to Galaxy’s Edge to check it out at nighttime. It’s a different ambiance in that section at nighttime and Toy Story Land.

Let’s Wrap it Up

You now have your perfect Hollywood Studios itinerary for your Walt Disney World vacation. I hope you’ll have fun and make the best out of your time.

Thanks for listening and reading!

UP NEXT: Top 10 Hollywood Studios Rides and Attractions You Must Do