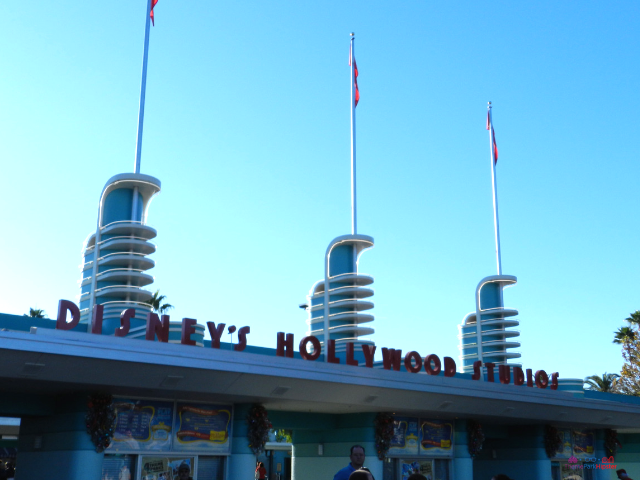 Disney’s Hollywood Studios is a solo theme park traveler’s must!

Hollywood Studios was once known as Disney-MGM Studios when it opened in 1989. It has always been a great half-day theme park for those visiting Walt Disney World solo; however, it is now a park that is spectacular to discover for over a whole day.

The addition of Toy Story Land and the coming addition of Star Wars Land, has made Hollywood Studios a competitive theme park.

One of the first questions you may have is…

How do you do Disney’s Hollywood Studios solo?

In today’s article I will show you how to do one of Disney’s parks by yourself. If you want to learn how you can go to all other theme parks alone, then your own copy of The Solo Theme Park Traveler’s Guide.

This handbook will walk you step-by-step to planning that first solo Disney World vacation.

Doing Hollywood Studios solo doesn’t have to be scary.

I’m also able to let go just a little bit of my introverted side.

The Disney parks are suited just for solo adult travelers. You will never have to worry about feeling isolated or scared when going at it alone.

As a solo park hopper, Hollywood Studios offers many activities that can be thoroughly enjoyed, such as:

How do you do Hollywood Studios by yourself in one day?

It’s definitely doable if you have a good game plan. Save the Hollywood Studios one-day cheat sheet to your phone below!

One of the cool thing about Hollywood Studios is that the attractions and shows are not too far apart. This makes it easy to navigate the park and do everything in one day.

Listen: How to Do Hollywood Studios in One-Day with Itinerary

Do you think people will notice that you’re alone at Disney?

Or, do you feel you will not have as good of a time going to Orlando alone?

If this sounds like you, then I’m here to help guide you into the perfect solo day at Disney’s Hollywood Studios.

Now that we have the basics out-of-the-way, allow me to welcome you to Disney’s version of the historic Hollywood, California!

Traveling this way can be daunting to some Disney fans so, I recommend starting small when it comes to solo travel.

Let’s say you arrive to Disney one day prior to your whole family getting there, then try to do a section of Hollywood Studios to see if that makes you feel comfortable with traveling alone.

This may just convince you to try a whole day at one of the Walt Disney World parks on your own.

2 – Plan out Your Day at Hollywood Studios

The thought of going to a Disney park alone may already be too stressful, so I recommend mapping out your day.

Having an itinerary relieves travel anxiety and keeps your mind occupied with all the fun stops you plan on doing at Hollywood Studios.

Be sure to go over the park map in the My Disney Experience App.

3 – Get Your Hollywood Studios FastPasses and Reservations ASAP

FastPasses to the hottest attractions such as the Slinky Dog Dash roller coaster in Hollywood Studios need to be booked like yesterday!

You will thank me later for this and your solo day at Hollywood Studios will be EPIC!

Hipster Power Tip: When choosing FastPasses for Hollywood Studios be sure to choose at least one of the following attractions due to popularity: Smugglers Run, Twilight Zone Tower of Terror, Slinky Dog Dash, or Rock ‘n’ Roller Coaster.

In addition to booking your FastPasses, you’ll want to make other reservations early too. Walt Disney World is the top tourist destination in the world.

This is an advantage for you, because you will never have to think of what to do.

You’ll want to book your dining or special event reservation as soon as you know your Disney vacation dates. Popular Hollywood Studios restaurants and annual events book up quickly.

4 – Discover All the Lands of Hollywood Studios

Learn the different history of each land or area in Hollywood Studios. There are so many unique hidden gems and facts that you’ll love learning about as you walk through each highly themed area.

Toy Story Land is a gem in its own right. Being shrunk in Andy’s backyard, sends you into a fun sense of nostalgic charm.

I also recommend exploring the Hollywood Tower Hotel. An attraction with a story told with deep and intensely terrifying details.

5 – Experience Your Hollywood Studios Must Do Attractions

Since this is your solo Disney trip, it’s a time to do Hollywood Studios your way!

This is the MAIN PERK of going to Walt Disney World alone.

In order to get all your Hollywood Studios must do’s, I suggest doing a bit of researching on the web and writing everything down you want to accomplish.

Here Are the Best Hollywood Studios Rides and Attractions

6 – Don’t be Afraid to Socialize

I know firsthand what it’s like to be an introvert, but get out of your comfort zone and introduce yourself to at least one person on your day at Hollywood Studios.

These groups usually have people in it who frequently travel to Disney parks solo. They will become your very own theme park family and they will also help you out with the latest park news and their own personal theme park hacks.

Now that I’m a bit older, I love meeting all the characters in Hollywood Studios, such as, Woody and Jessie. I also love watching others dress like the characters they plan on meeting in the parks. It always makes for amazing photos!

Where to Find Characters at Hollywood Studios?

*Locations subject to change without notice.

8 – Know the Reasons Why doing Hollywood Studios Solo is Incredible!

There’s an incredible sense of independence when you’re exploring the parks by yourself.

You can watch Belle and all of her magical friends perform on stage at Hollywood Studios without anyone mocking you about your choice in entertainment.

With the solo experience you gain the advantage of becoming a better problem solver. Because it’s just you on this vacation path, you will have to come up with plan A, plan B, and plan C for some of the theme park events.

When you’re with a group of people you may have many different opinions or solutions to problems that arise. However, when it’s just you, you become the sole problem solver.

Read: How to Be Alone at Disney Without Feeling Lonely (Alone vs. Lonely)

What ride should I ride first at Hollywood Studios?

For now, you should knock out all the rides in Star Wars: Galaxy’s since it’s the most popular area at the moment.

Once you finish your galactic adventure, you’ll want to head over to Toy Story Land.

What day of the week is best to go to Hollywood Studios?

While planning out your day, you’ll want to have your FastPasses booked as mentioned earlier in this guide and arrive early to the park.

As you can see, Hollywood Studios has so many hidden gems ready for you to discover. On your next solo Disney trip, make it a fun game to discover each little secret.

Have I convinced you to go to Disney’s Hollywood Studios solo yet?

If you want to go to a Disney park, then go!

Traveling solo to theme parks is my Theme Park Therapy and I want it to become yours.

Let me know below if you’ve ever went to Hollywood Studios by yourself or if you’re thinking about going at it alone in the comments below?

Are you planning a Disney vacation soon? Read the Disney Vacation Planning Guide for your next dream trip!

UP NEXT: 9 Safety Tips for Women Traveling Alone to Disney World