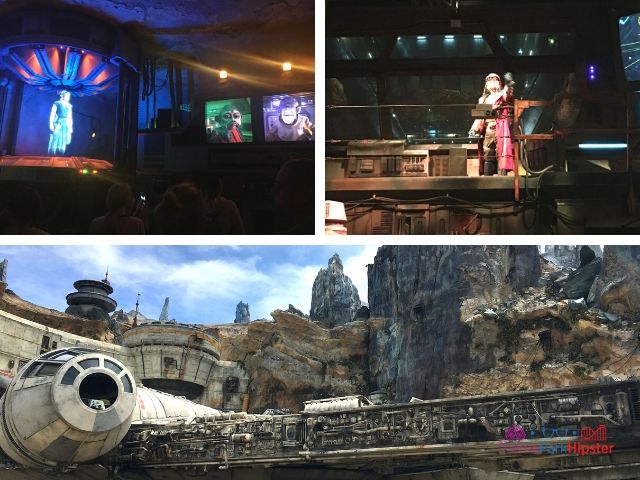 Are you ready to experience the Star Wars rides at Disney?

Star Wars: Galaxy’s Edge is the latest land to open at both Walt Disney World and Disneyland. Both lands have exactly the same things inside, so there’s no need to head to Orlando and Anaheim to get the full Galaxy’s Edge experience.

One thing people rave about inside the land are the two attractions, and we can understand why.

How many rides are in Star Wars Land (Galaxy’s Edge)?

There are two rides in this new land.

The first attraction is Millennium Falcon: Smugglers Run, where you have the opportunity to pilot the fastest hunk of junk in the galaxy.

The second attraction is Star Wars: Rise of the Resistance, where you get captured by Kylo Ren and the First Order and need to escape.

Before you step foot into Star Wars: Galaxy’s Edge you’re going to want to keep reading to learn everything you need to know about these two rides and how to get on them without waiting in lines all day.

The first ride that opened inside Star Wars: Galaxy’s Edge was Millennium Falcon: Smugglers Run. The attraction is a screen-based motion simulator that takes you on a mission with Hondo Ohnaka.

Stand-By vs. FastPass+ vs. Single Rider

Normally we are major advocates for the single rider line, but if you’re planning a trip to Star Wars: Galaxy’s Edge and have not been on this attraction then we implore you to stand in the FastPass+ or Stand-By line.

The main reason for this is so you don’t miss the all-important pre-show!

This is where the ride and your mission are set up for you and you meet your co-pilot, Chewbacca. If you go single rider you do not get to see this and the ride doesn’t feel complete after you get off.

If you’ve been on the ride before try to grab a FastPass+ reservation, or wait until the end of the night to hop in the line for a lesser wait time.

The pre-show for Smugglers Run introduces you to Hondo Ohnaka who is a pirate that you might know from the animated series Star Wars: The Clone Wars and Star Wars Rebels.

Hondo has a smuggling plan that he’s invited you in on and this is where you’re going to learn about it.

If your group is under six people you will be paired with other guests to fill the pod where you will actually ride the attraction. Each person will be assigned a position, two pilots, two gunners, and to engineers.

Pilot is obviously the most prized position due to actually being able to put the ship into hyperspace, but it’s also the most difficult position.

Gunner and Engineer are great for people who want to sit back and enjoy the ride and not feel like they are making mistakes so their group gets points deducted from the score.

The ride vehicles for Smugglers Run are small pods that fit six riders. The interior of the pod looks just like the cockpit of the Millennium Falcon, and there are plenty of buttons to press to make noise and light up while you wait for a Cast Member to do the final safety check.

What do you do on the ride?

The ride lasts about three to four minutes, but can feel like a long time if your team isn’t doing well.

Hipster Power Tip: For the best chance to get as many points as possible you’re going to want to press all of the buttons right when the light up and listen to the instructions from Hondo that come into the cockpit throughout the ride.

When the ride is done the cockpit doors will open and if you did well the inside of the Millennium Falcon will look pristine and the overhead communications will be talking about how well you did.

If you did poorly, then the interior of the Falcon will look dirty and the overhead communications will talk about how the ship needs repairs and a new crew.

Star Wars: Rise of the Resistance

The second ride to open inside Star Wars: Galaxy’s Edge was Star Wars: Rise of the Resistance. This ride is really more of an experience than a ride, and takes you through having a mission with General Organa to getting captured by Kylo Ren and the First Order.

Premise of the ride

Rise of the Resistance takes place just before Star Wars: The Rise of Skywalker. The ride features characters like Rey, Finn, Poe, BB-8, and Kylo Ren.

There are ultimately four parts to this ride, starting with your mission from Rey to trying to escape Kylo Ren and get back to base.

Boarding Groups (How to ride Star Wars Rise of the Resistance?)

The only way to get to ride Star Wars: Rise of the Resistance is to get a boarding group through the My Disney Experience or Disneyland App, depending on which park you are visiting.

The boarding group will put you into a virtual queue, then when your boarding group is called you will get a push notification on your phone and be able to go and enjoy the ride.

Note that boarding groups do tend to run out at the very beginning of the day so being at Disneyland Park or Disney’s Hollywood Studios when they open is imperative to being able to ride this attraction.

During the first pre-show you’ll see a hologram of Rey who tells you about the mission from General Organa.

Poe Dameron also shows up letting you know that you look like fine recruits for the Resistance, and as the doors open you’re shuffled past a full-sized X-Wing that belongs to Dameron.

The first ride you’ll experience during Star Wars: Rise of the Resistance is the motion simulator transport that’s going to take you off Batuu and into space. Your transport is soon taken over by a Star Destroyer and the First Order.

General Hux is there to let you know that you are now prisoners and the doors open, to what we think is the best reveal in a Disney attraction- a full legion of Storm Troopers in a hangar bay.

This is technically where the queue for the second part of the ride starts. Take as long as you like to enjoy the sights and sounds of the hanger bay before heading into the actual stationed queue.

We suggest waiting until most other people have moved to the actual queue so you can take great photos and not have to stand in a real line as long.

The queue then deposits you in a holding area before your interrogation with Kylo Ren. The interrogation room Is quite small, and can feel intimidating, but don’t worry. The Resistance is there to help you escape.

The Ride Vehicle and Escape

When the doors open you’ll be taken into a small room with two ride vehicles. Each one holds eight guests, and are polite by R-5 droids.

According to the Resistance fighters that broke you out, those old R-5’s aren’t super reliable so you might get in to a bit of trouble as you try to escape the Star Destroyer.

The escape takes you through a hanger with full-sized AT-AT’s, past Kylo Ren and General Hux chatting, a battle outside the ship and more. Eventually Finn finds you and gets your group to the escape pods and back down to the Resistance base on Batuu.

The exit of the ride takes you past a few familiar characters then right back out to Batuu where you can continue to live your Star Wars adventure.

In our opinion if you can get a boarding pass for Star Wars: Rise of the Resistance, it’s well worth the early morning wake up call and trek to the park.

It’s one of the best rides Walt Disney Imagineering has ever created, and pushes the boundaries of what a theme park attraction can be.

Millennium Falcon: Smugglers Run is still a fun ride, and is worth trying to get on, especially if you can get a FastPass or the wait time is short.

Both attractions are great additions to the lineup at Disneyland Park and Disney’s Hollywood Studios, and really do help you to feel like you’re inside Star Wars.

What’s your favorite Star Wars ride? Let us know in the comments section below!