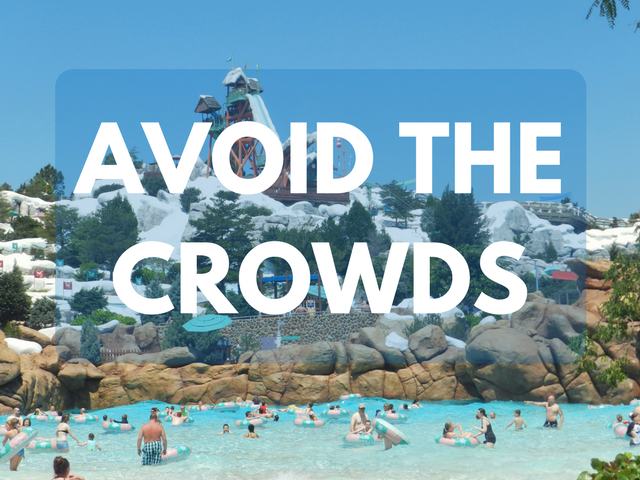 Do you know what the best time is to visit Disney World?

Planning a visit to the happiest place on Earth is always an exciting experience. And finding the best deals, tips, and tricks to make each theme park adventure is everything ThemeParkHipster is about.

While you’re searching for discounted theme park tickets, and taking advantage of free Walt Disney World dining, have you considered when you should book your vacation?

Holiday peaks, Disney crowd sizes, park hours, weather, and a few other factors have a lot to do with your Disney experience, including how long you’ll be waiting in line for your favorite rides.

Here are a few tips to get you started on picking the ideal times to travel to Disney alone, or with friends and family.

If you’re a solo traveler, this one’s especially for you.

For parents, this can be a bit tricky. Taking your child(ren) to Disney World sounds like the best gift ever!

The only issue is every other mom and dad has the same exact idea.

Of course, that doesn’t mean you can’t take your kids to Disney for Christmas season or any other holiday for that matter; it just means you’ll need to be prepared for a lot of company.

The winter season (Christmas and Thanksgiving breaks especially) as well as spring break and the general summer season are all pretty popular times for the parks.

If you don’t mind long lines and you feel welcome in large crowds, this may not be a deal breaker for you.

Otherwise, I recommend checking out the chart below that compares the months of the year by seasonal weather and crowd size.

Listen to Podcast Episode: If you’re more of a podcast person, then listen to When to Go to Walt Disney World here.

3 – Know What are the Best Times to Go to Disney

While you’re planning that perfect day to go, don’t forget to download the official Disney World Crowd Calendar to view the crowd level of each day!

These months are closely followed by March, May, September, and October as still pretty decent visiting times.

December and March aren’t too bad, especially since December is typically a very festive time for the theme parks.

Florida is mostly filled with perfect weather; however, there are moments when I question my sanity of living here.

Summertime in Florida is like no other state, especially for theme park goers.

If you’re a resident of an area that experiences all four seasons with mild summers, then you will definitely be taken aback by the hot, humid, indescribable weather that Florida is known for.

The weather can truly affect your choice when deciding what season to visit the parks.

You’ll want to be prepared for surviving the Disney heat, but don’t worry I have some summertime survival tips here.

Before you make you way out to Walt Disney World, let’s breakdown the pros and cons of each Month.

January is one of the last remaining months considered to be the off-season with Typhoon Lagoon and Blizzard Beach usually closed for refurbishment.

Overall, late January is one of my favorite times to visit the Disney parks.

February is still a slow month with mild weather and is usually better than January in regards to crowd level.

The Disney water parks may still be closed during this time.

In March, temperatures are starting to warm up, but still manageable. Park attendance begins to pick up this month, but not as bad as summer months.

Temperatures continue to rise peaking around the mid-80s during the month of April.

The crowd level is still mild to moderate due to the last of the spring breakers.

May in Disney World

The season of thunderstorms and downpours starts in May.

Not to mention the introduction of the torturous Florida humidity and heat peaking in the 90-degree Fahrenheit range.

Crowds are usually moderate during this time since it’s the month prior to theme park tourist season.

May Days to Avoid:

This is the month to have your patience ready as the tourist season kicks into full gear along with the never-ending Florida sun rays and constant rainy days.

It’s during this time that water, sunscreen, sunglasses, an umbrella and a well-ventilated hat are a must!

This is one of the busiest times at Walt Disney World. Not only are most kids out of school, you have to deal with one of the major holidays in America, which is Independence Day.

The parks are opened much longer during July, but you still have to fight the crowds and the unforgiving Florida sun.

Hipster Power Tip: Take a break midday after 12 p.m. to avoid the most dangerous U.V. rays from the sun and return towards the evening after 5 p.m.

Believe it or not, by August temperatures are still rising in Florida which makes you feel miserable being outside.

The crowd level is still heavy with a dip coming towards the end of the month as kids head back to school.

In the early part of September lines began to die down only a little bit.

The weather in September is the same as August, so come prepared as if you’re visiting Florida in the middle of summer.

Plus, it can also be a peak month for hurricane season.

During the month of October, the Florida weather starts to cooperate…well, slightly. Days may start off cool (in the mid-60s) and end pretty warm (in the upper-80s).

This is one of the best times to book a trip to Walt Disney World!

You’ll be able to see all of the fall décor lining the famous Main Street U.S.A. of the Magic Kingdom theme park.

The crowd levels tend to pick up mid to late October as everyone gets in their quick Epcot Food and Wine Festival visits.

November is my favorite time to visit the Disney parks.

Not only do you get to see both fall décor and Christmas décor all in one month, the weather is absolutely gorgeous in Florida.

December in the magical Walt Disney World Resort is the idea time to visit the parks.

Only problem is that everyone wants the same enchanted experience for the holidays.

The parks are decked out in holiday cheer and the Florida weather is oh so dear.

If you must attend in December, then I recommend coming during the first two weeks of the month as these dates are still fairly quiet at the parks.

If you’re planning a December Trip, you’ll probably just have to weigh whether it’s more important to you to avoid really big crowds, or for you to join in on the Holiday Fun.

Even with this guide, sometimes running into a sea of visitors is unavoidable. There are constant field trips and sometimes just a random influx of visitors.

For times like these, I wanted to share a few more tips to make the best of a situation where beating the crowd isn’t possible.

FastPass+ (or just FastPass) is a feature in the My Disney Experience App that lets you to book your time slot on select rides either 30 or 60 days in advance.

Any Disney ticket or Annual Pass holder can book rides up to 30 days in advance.

Guests of the onsite Resort Hotels can reserve their time slots on rides as far as 60 days in the future.

The FastPass+ is a great time saver and even more helpful during peak seasons.

So, even if you find yourself in the park with tens of thousands of other people, you can still avoid those long twisted lines.

Read: How to Use the Disney FastPass+ here.

5 – Use Mobile Ordering For Food

Any day you’re at one of the theme parks, you can plan your meals ahead of time using Disney Mobile Ordering.

Like FastPass+, it allows you to plan your day first so you can spend the rest of your time enjoying the magical experience.

It’s for same day service only and includes beverages.

You can access the Mobile Food and Beverage Ordering service from the My Disney Experience App.

If you’re not familiar with the feature, I have a pretty detailed article and step-by-step guide here.

Reserving your seat at special events and highly-coveted restaurants is always a good idea, and Walt Disney World is certainly no exception.

Because the parks are so large, special events book quickly, and the better restaurants fill just as fast.

In the article The 35 Best Walt Disney World Tips, I cover how you can use the My Disney Experience app to get into special events that are otherwise difficult to book.

Just check the app on the site around 7 a.m. and try your luck. You might not get in, but it’s definitely worth a shot.

With the app, I was able to get into the Epcot Food and Wine Festival and a beverage seminar that was booked for a full month!

These are just some of the ways get around thick crowds and the infamous Disney theme park lines.

Before when end this podcast episode, let’s go over some of the most common questions I’m asked.

How much does Disney World cost?

A one-day REGULAR season Disney World ticket starts at $118* (prices do fluctuate based on the season).

What day of the week is best to go to Walt Disney World?

What is the best month to visit Disney World?

Because of the low crowd level and perfect weather, January is the best month to visit the parks.

What are the off seasons for Disney World?

Honestly, I cannot say that there are off seasons at Walt Disney World.

Keep in mind that this is the top tourist destination in the world, which means people are always planning a vacation here despite the time of year.

What I will say is that January to early March tends to be the least crowded time at Disney World?

The Magic Kingdom currently does not have any single rider attractions.

While planning out your day, you’ll want to have your FastPasses booked as mentioned earlier in this guide and arrive early to the park.

Read: How to Get the Best FastPasses for Animal Kingdom

When planning a trip to Disney, choosing the perfect day shouldn’t be complicated. I hope I was able to help guide you with some of my best tips.

Let’s quickly review all the tips for understanding the Disney World Crowd Calendar.

How to Pick the Best Days to Visit

Let me know your favorite month is at Walt Disney World in the comments section below.

Get more of your questions answered below: