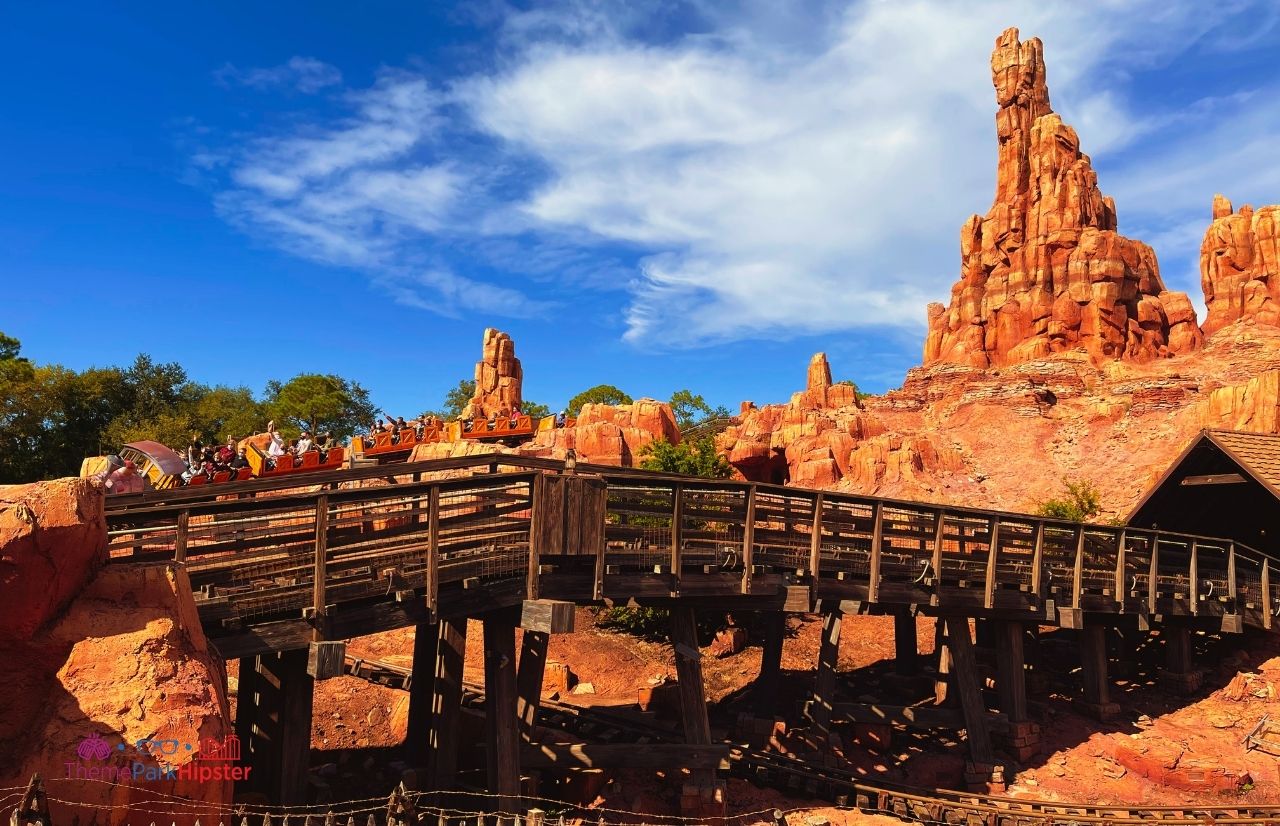 Howdy Folks! And welcome to the Wild West. Since you’re here, let me take you on a virtual ride of BIG Thunder Mountain Railroad at Disney’s Magic Kingdom theme park!

And by wild west, I really mean Frontierland location at Walt Disney World.

Big Thunder Mountain Railroad is one of the four “Disney Mountains,” the other being Space Mountain, Splash Mountain, and Expedition Everest.

Considered a true Disney Classic and one of the must-do experiences when you visit the resort, today I will be diving deep into the history of the attraction and its impact on the park in which it resides.

For your safety, remain seated with your hands, arms, feet, and legs inside the train—and be sure to watch your kids. If any of you folks are wearin’ hats or glasses, best remove ’em—’cause this here’s the wildest ride in the wilderness!

What Park in Disney is Big Thunder Mountain Railroad?

There are a total of 4 versions of this attraction with the original being at Disneyland (1979), the Magic Kingdom (1980), Tokyo Disney Resort (1987) and Disneyland Paris (1992). But the backstories for each are fairly similar with slight changes.

What is Big Thunder Mountain Based On?

This story starts in the late 1800s, someone struck gold in Big Thunder Mountain located in the American Southwest. In true western fashion, the small mining town of Tumbleweed blew up, not literally, overnight.

As time went on, the town thrived and even created a line of mine trains to help them mine the gold more efficiently.

However, there was a slight problem with their recent prospects and that was the location.

Unbeknownst to the settlers of Tumbleweed, the mountain was sacred to the local Native Americans and was cursed land.

Soon after the settlers desecrated the mountain, a terrible tragedy struck the town. A flash flood destroyed the mines and the town of Tumbleweed.

Due to this, the town was completely abandoned by the townspeople. Shortly after this, somehow, it was discovered that the trains were running around the mountain without explanation, without engineers and without a crew.

So, it only made sense to create the Big Thunder Mountain Railroad in the abandoned Tumbleweed town and take wanderers on rides on the possessed trains…

Makes sense to me!

Natural Inspiration for This Disney Attraction

The inspiration for the attraction’s rock work design comes from the rising buttes of Arizona and Utah’s Monument Valley. In recent years, an addition to the backstory was placed in the lore of the attraction.

Due to his name, he is of the belief that it is his destiny to find a large sum of gold within Big Thunder Mountain.

However, the locals have stated that anyone who mine the gold within will be cursed, which is why the town of Tumbleweed suffered such a terrible fate.

Despite this, and many failed attempts, the company continued to operate and attempt to get the gold. The company has seen many unnatural occurrences and tragedies but still pushes on to achieve Barnabas’s destiny.

There is a photo of Barnabas, and it resembles a certain imagineer. When you figure it out, come back and let me know in the comments section below!

One day, a cave randomly collapsed during a mining expedition in the mountain, trapping the miners within. Chandler made a rescue attempt with his machine, saving the lives of the miners buried deep in the cave.

As the rescue efforts drew to a close, somehow Chandler was trapped beneath the surface!

Not to worry, he managed to live to tell the tale but it did take him and his machine beyond Big Thunder Mountain to assist with scientific discoveries.

Jason is part of the Society of Explorers and Adventurers where he led an expedition to find the golden city of El Dorado with, you might have guessed it, Barnabas T. Bullion, another member of the society.

History of Big Thunder Mountain Railroad at the Disney Parks

Now that we have dug deep into the lore of Big Thunder Mountain Railroad, let’s get into some of the ride’s history.

Around 1972 to 1973, Tony Baxter and Marc Davis brainstormed the attraction for Disneyland, but it was put on hold due to work on Pirates of the Caribbean.

It would stay on hold up until 1977 when construction finally broke ground in Frontierland at Disneyland. On September 2, 1979, the ride finally opened to the public as one of the first rides at the park to be assisted by with a computer aided design.

Hints of the time period the attraction is in lies within the queue. Most of the mining equipment for the attraction was found through flea markets and auctions throughout midwestern towns.

You can hear laughter and music playing in one of the saloons of Disneyland’s version of the mining town, Rainbow Ridge.

A typewriter can be heard in another one of the buildings, giving the attraction a time period setting of about the mid- late 19th century.

Most guests are familiar with the dinosaur skeleton that peeks out of from part of the rock formations at every version except in Disneyland Paris.

Train sounds are piped through to truly give the ride a more immersive effect. This includes train whistles, despite the fact that the Big Thunder Trains have no train whistle.

The ride stats for Big Thunder Mountain Railroad are actually intriguing as it was part of a medical study. But before we dive into that let’s go over the basics.

For Disneyland’s version the manufacturer was Arrow Development originally with Dynamic Structures doing the 2014 refurbishment.

On Walt Disney World’s version, it was built with the help of Vekoma and all attractions feature single lap bars.

As a steel mine train type ride with a custom layout, it can reach a maximum speed of 35 MPH.

The maximum height is 104 feet and maybe you can try the goat trick while you’re allowing the chains to take you to the top of that lift hill!

For 3 minutes, you will be experiencing the wildest ride in the wilderness!

Does Big Thunder Mountain have a Single Rider Line?

In the Magic Kingdom and Disneyland theme park, Big Thunder Mountain does not have a Single Rider Line.

Although there are a few bumps and dark scenes of the ride, Big Thunder Mountain Railroad is not as scary as it may appear to be when compared to other rides such at VelociCoaster at Universal Orlando.

I can’t let you go without telling you about that last intriguing stat. In October 2016, Dr. Wartinger published a paper in a medical journal.

His findings concluded that several of his patients had passed kidney stones after riding Big Thunder Mountain Railroad. One patient in particular had passed three kidney stones on three separate occasions!

Dr. Wartinger, with Disney’s permission, tested this with a 3D model of a kidney and rode it over 20 times.

He found that 70% of the time, the kidney stone passed. But even more interesting is that this was tested on Space Mountain and Rock ‘n ‘Roller Coaster failed to give similar results.

So, if you want to pass a few kidney stones, get in line for Big Thunder Mountain railroad!

My Final Thoughts on This Classic Disney Ride

As I’m sure most of you are well versed with the Disney Parks, I genuinely hope you have learned at least one new thing about this classic, cursed mountain!

And remember all of the things that I told the next time you decide to ride a possessed train through the hills of that wild mountain town!