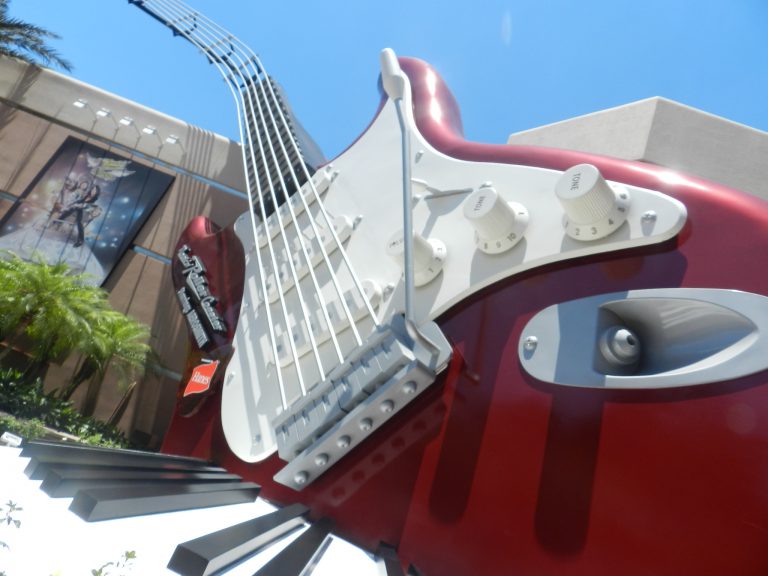 Can you handle the g-forces of Rock ‘n’ Roller Coaster at Walt Disney World?

What thrill seeking guests get most excited about lately when visiting Disney’s Hollywood Studios is Galaxy’s Edge. But if you aren’t a huge Star Wars person, then you will love the thrilling options at the end of Sunset Boulevard.

Before Galaxy’s Edge came to fruition, people would rush down Hollywood Boulevard and take that quick left on to Sunset to seek adventure within the walls of Hollywood Tower or Terror and Rock ‘n’ Roller Coaster.

Rock ‘n’ Roller Coaster is a beloved favorite amongst fans and guests alike. The combination of music, thrills and awesome theming gets everyone’s adrenaline pumping!

Aerosmith gives you a behind the scenes look at their world.

In this article, I will be diving more into the details of how the attraction came to be, how Aerosmith wasn’t actually the first choice and what keeps guests coming back for more!

I will be breaking the location down as follows:

When MGM studios first opened in May 1989, It was meant to be a beacon and representation of the glamour of Hollywood’s Film, Television and Radio elite.

To be fair, Guests were not terribly far off in this thinking. Upon opening, there were only four attractions.

One included the Studio Backlot Tour which some may remember prior to it being closed was around 30 mins. Originally, it was 2 hours long prior to its refurbishment!

CEO at the time, Michael Eisner, leapt into action in order to compete with the neighbors down the street, Universal Studios Orlando, which opened the following summer in 1990.

Along with adding the Indiana Jones Stunt Spectacular and Star Tours by the end of the year, he decided to expand the park by introducing Sunset Boulevard.

Sunset Boulevard would be based on 1930s Hollywood and would feature eateries, shops and 2 E-ticket attractions at the very end of it.

Eisner wanted to capitalize off of what was called “Eisner’s Mickey Mouse” also known as “Roger Rabbit”, a box office smash hit which debuted in 1988.

Roger was everywhere in every park at the time and quite popular. There were plans to originally create Roger Rabbit’s Toontown at the end of Sunset Boulevard but Disney and Amblin Entertainment couldn’t agree on character rights.

It was instead decided to create the drop tower attraction, Hollywood Tower of Terror, which was completed and opened with Sunset in summer 1994.

Unfortunately, Rock ‘n’ Roller Coaster was put on hold due to the failure of Euro Disney. Construction began 2 months prior to its announcement in 1998.

The theme fit Sunset Boulevard perfectly since rock n roll musicians were drawn to the strip in the 1960s.

Disney began their search for a rock band to be the star of their attraction. Aerosmith was in fact, not Disney’s first choice although they would eventually end up being the faces of the ride.

The Rolling Stones were approached first and they were interested but it fell through when they asked for $10 million as their asking price.

Kiss was approached next and they were interested, but this too fell through as their asking price was even more than the Rolling Stones.

Disney almost decided to use various rock musicians from the 1950s and 1960s as they were month out and unable to sign a band yet.

Hope had arrived when Disney worked with Aerosmith to create a single for the film “Armageddon.”

Since they already had a good contact with the band and with Aerosmith’s asking price only being a tenth of The Rolling Stones, Disney quickly announced Aerosmith as the stars of the attraction in June 1999.

Rock ‘n’ Roller Coaster allows guests to tour G Force Records, a nod to the G forces you hit at launch on the ride. As guests go through the queue, you will see memorabilia from past bands who are signed to G Force.

Guests are then taken into a room where they catch Aerosmith at the end of a recording session as their manager rushes them out to make their across town concert.

But Tyler insists that they can’t just leave the guests there and gives everyone backstage passes.

The band heads out while the manager orders a few super stretch limos for guests to ride to take them across town to make it in time for the concert.

Time to Board the Limo

Guests are then taken through an alley to the parking garage to get loaded into their super stretch limos. You will notice some cool features like a nightclub and much more.

Every limo is loaded with two different Aerosmith songs which can be identified by their license plates. Vekoma constructed the ride which boasts three inversions including a sea serpent roll and corkscrew.

Guests will also experience up to 5 G Forces and will be launched from 0 to 58 MPH in 2.8 seconds, making it second in speed to Test Track which reaches 64.9 MPH.

When the ride ends, sadly you didn’t make it in time. But you do end up in the VIP backstage area aka the gift shop and you can scan your ride photos on your MagicBand for memories!

The shop is filled with unique merchandise themed to the ride so be sure to stop and take a peek before you head out.

6 Tips and Tricks for Your Hollywood Studios Trip

Here I will give a few quick tips, tricks and tidbits about Rock ‘n’ Roller Coaster that I’ve learned from my time working at Disney’s Hollywood Studios and from my dear friend, Patrick Snipes , who worked the attraction in question.

If you are a solo traveler, it is best to skip the FastPass for this one. Rock ‘n’ Roller Coaster tends to have the lowest wait times amongst the E-ticket attractions in the park.

So, you will have a better chance of getting on quicker if you just do Single Rider Line.

2. Look Around for Hidden Details

Behind the garage is the signatures of every Cast Member to ever work at the attraction.

The license plates on the vehicles determine what song(s) you will get:

The ride has nods to several Los Angeles freeways which is why you see random highway and freeway signs along the ride track.

The attraction has used two Los Angeles Radio DJs for the host of “La’s Classic Rock Station” on the ride. Originally it was Joe Benson and currently it is Bill St . James from “Flashback.”

Another is in the tile mosaic in the entrance to G Force Records. The carpet in the studio C room is all hidden mickeys.

This one in particular was the first I ever found on my own. Apparently, there are some on the license plates too but I haven’t noticed them yet.

Vekoma built the attraction as an enclosed steel launch coaster with a height of 80-ft and a track length of 3,403-ft. There once were two Rock ‘n’ Roller Coaster attractions, with the other being at Walt Disney Studios Park.

This was closed in 2018 to make way for an Iron man themed attraction.

5. Change the Music on Your Ride

Cast Members have the ability to change the music for guests if you ask but it’s very rare that they will.

6. Get Your Own Poster

Finally, if you do use FastPass, you will get your own specialized musician poster in the rotunda of G Force Records when you enter, truly making you feel like a rock star.

Rock ‘n’ Roller Coaster was a late bloomer in terms of attractions at Disney’s Hollywood Studios and if it wasn’t for the Roger Rabbit fallout, we wouldn’t have had it today.

But despite its late arrival and the hiccups along the way, its standing here 20 plus years later and still one of the go to attractions at the park.

You may even spot Steven Tyler as he’s known to visit the attraction and surprise guests!

This unique rock n roll attraction is a true testament to Walt Disney Imagineering and to the Sunset Strip of the 1960s. Rock ‘n’ Roller Coaster is one of the best thrill rides on property for guests and the most fun for sure.

What musical artist would you love to listen to while riding this attraction? Let us know in the comments below!

UP NEXT: Top 10 Hollywood Studios Rides and Attractions You Must Do