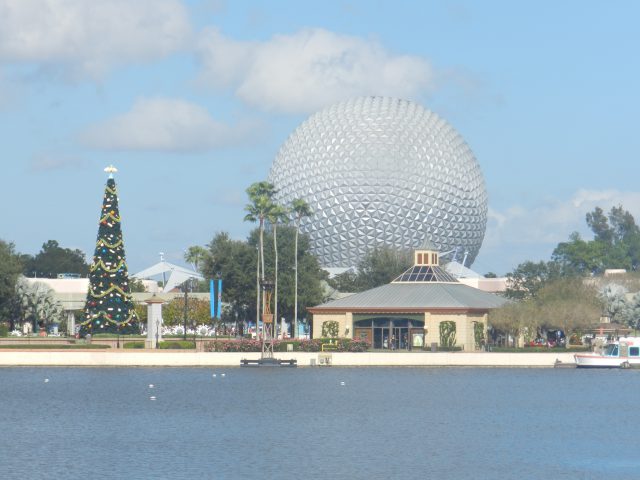 You can now see holiday displays throughout the Walt Disney World Resort. The Holiday Services team will be installing yuletide designs at Epcot after park hours on Nov. 13th-14th. The Holiday Services team will also be installing holiday decor at Disney’s Animal Kingdom after park hours on Nov. 17th-18th. This is definitely my favorite time of year at Disney.

New! Jingle Cruise Returns to Magic Kingdom Park: Back for a second season, the popular Magic Kingdom Park attraction, Jungle Cruise A.K.A “Jingle Cruise” has returned! The holiday additions offer Disney guests the chance to experience the yuletide transformation of the classic attraction. Jingle Cruise is themed as if the Skippers are once again homesick for the holidays and decorated the attraction queue and boathouse with homemade decorations, gifts and items from back home. The Jingle Cruise boats are temporarily renamed after holiday titles and the skippers entertaining guests with dry holiday puns. In addition to being open during daily park hours, Jingle Cruise will also be in operation during Mickey’s Very Merry Christmas Parties.

New! Nightmare Before Christmas Song Added to Osborne Lights: You may also experience Jack Skellington in this year’s Osborne Family Spectacle of Dancing Lights. The song “What’s This?” from “Tim Burton’s The Nightmare Before Christmas” has been added to the spectacular show this year including all the wonder and delight Jack Skellington experienced upon first visiting Christmastown. The Osborne Family Spectacle of Dancing Lights is presented nightly through January 4, 2015 (except November 20), and is included with regular admission to Disney’s Hollywood Studios.

New! Limited Edition Holiday MagicBands: Mickey Mouse and Minnie Mouse holiday MagicBands will be featured during Mickey’s Very Merry Christmas Party. Presented in a decorative gift box, the limited-edition graphic MagicBand will have an edition size of 5,000 and will retail for $29.95 (plus tax). Guests must present one of the following for the MagicBand to be linked to at the time of purchase: valid theme park admission, Memory Maker card or an active MagicBand.

Mickey’s Very Merry Christmas Party will also feature an exclusive Sorcerers of the Magic Kingdom card of “Elsa’s Icy Shield” and will let players harness some of Queen Elsa’s special “Frozen” powers. This is an interactive game that allows guests to join Merlin’s quest to defeat Disney Villains who are trying to take over Magic Kingdom Park.