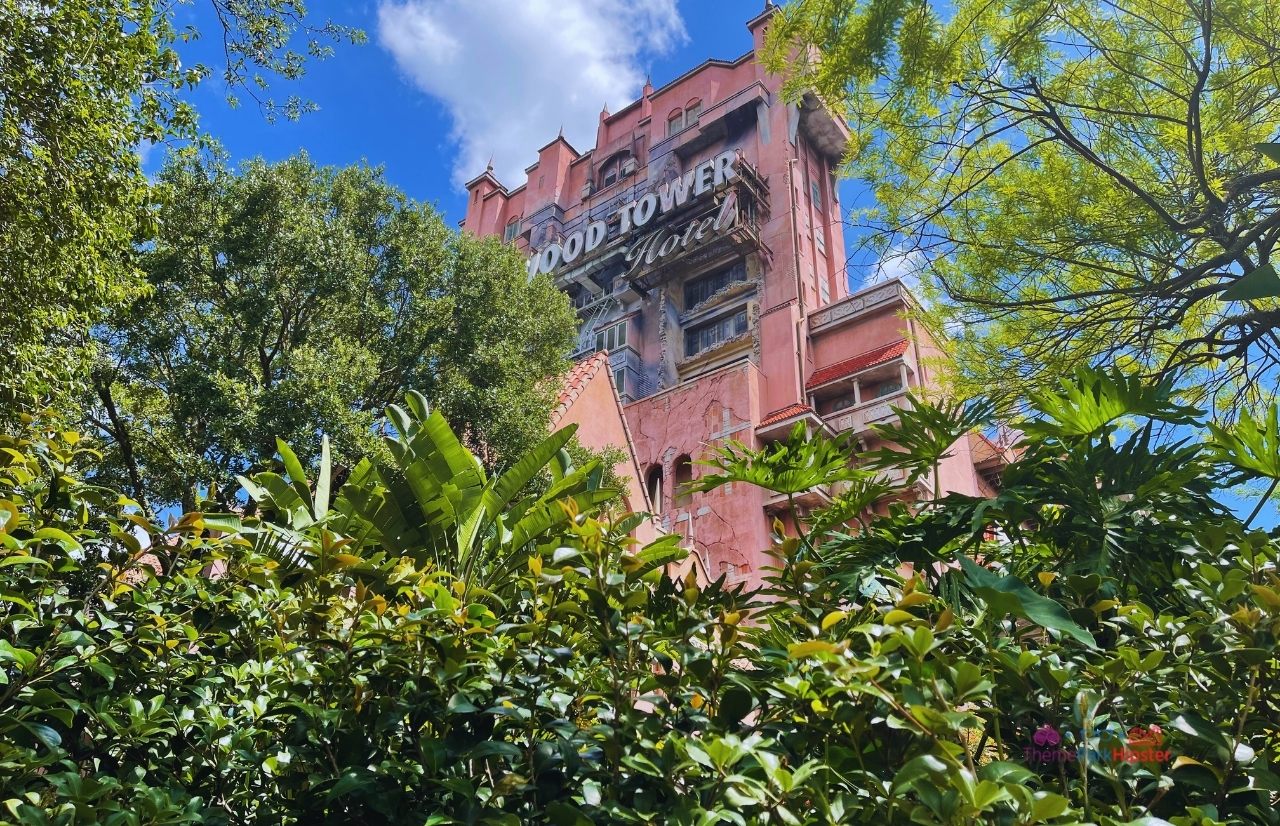 Are you ready to descend into the world of the Disney Twilight Zone Tower of Terror?

You unlock this article with the key of imagination. Beyond it is another dimension.

You’re moving into a land of both shadow and substance, of things and ideas. You’ve just crossed over into… The Twilight Zone Tower of Terror!

Tonight, you are the stars of one of the most amazing shows to have ever grace a television set. Not to mention, it gave inspiration for one of the best attractions at Walt Disney World and one of the best TV movies.

Why We Love the Disney Twilight Zone Tower of Terror

The Twilight Zone Tower of Terror is a true marvel to match the show. It continues to be beloved as it beckons those who walk down Sunset Boulevard to find out its secrets within.

Today we will be going over the following:

Tonight’s story on The Twilight Zone is somewhat unique and calls for a different kind of introduction.

We invite you, if you dare, to step aboard because in tonight’s episode, you are the star. And this elevator travels directly to… The Twilight Zone.

Regarded as one of the greatest television shows of all time, Rod Serling, Creator/Host of the Twilight Zone, gave audiences a standalone story weekly with a surprise ending or moral lesson at the end for five seasons.

The show ranged from Science Fiction to Fantasy to Horror, running from fall 1959 to the summer of 1964.

Rod Sterling co-wrote 92 of the total 156 episodes as well as completed the beginning and ending monologues for every episode.

He was known for creating the show to be able to subliminally showcase issues of racism, censorship and war that he clashed with studio executives about it.

The Twilight Zone was praised for giving many stars that we know today their big breaks such as:

During its run, the show was nominated for four primetime Emmy awards, winning two.

The Fall and Rise of The Twilight Zone TV Show

After the show’s cancellation, Serling sold the rights to CBS and the show is currently in syndication to this day. The show has been rebooted 3 times, the most recent being 2019 by Jordan Peele.

Serling’s legacy was continued on by his widow, who passed in January 2020. The show has ingrained Serling into our culture for years to come.

It was also inducted in the television hall of fame in 1985 and the show being referenced in various mediums over the years, including...The Twilight Zone Tower of Terror.

The History of Twilight Zone Tower of Terror at Disney

The tale begins on a night just like this….in the second development phase for Disneyland Paris.

It was originally envisioned as a free fall ride which would be part roller coaster, having guests flying quickly up a shaft. This Disney attraction was also going to be in Frontierland and would be called “Geyser Mountain.”

This was dreamed up in the late 1980’s but it was scrapped. Luckily, work on Disney’s MGM Studios was being done with the park set to open in May of 1989.

MGM Studios, the third park expansion for Walt Disney World, was in need of an E-ticket attraction.

At first, several ideas for attractions were proposed but then the drop shaft idea came up. Several haunted ideas were given including:

Personally, while I love the concept of the Stephen King and Vincent Price ideas, I am very glad the awards show idea did not progress beyond the blue sky phase.

What Does Twilight Zone Have to Do with Tower of Terror?

Imagineers thought it would be a great idea to use the show as a base for the attraction’s backstory.

They pictured an attraction that would unlock the fifth dimension that Serling often told viewers about in his anthology series and the project was green-lit.

After Disney was able to gather the licensing rights from CBS to use “The Twilight Zone,” it was time to settle on the story. Imagineers decided on a 1930s era Hollywood hotel combined with the Twilight Zone theme.

At one point, it was rumored that Disney even considered the idea of making it a real hotel.

However, most guests would not like to hear screaming from riders on the attraction so that idea was quickly shelved.

Upon being announced in Fall of 1991, it was described as a friendlier version of “The Haunted Mansion.”

Preparation went full speed ahead in 1992 but was paused due a sinkhole forming, leaving the Imagineers to move the location slightly.

Disney felt that Rod Serling had to be included in the attraction, as it was his creation and there is no Twilight Zone without Serling. They are synonymous. The issue was that Serling had passed away 20 years prior.

With Serling’s widow, Carol on board as an consultant, Disney held auditions for the man who would voice Serling in the attraction.

In the end, Mark Silverman was chosen by Carol to provide the voice. He would later add to the Disney California Adventure version and even to the 2019 season finale revival by CBS.

Is the Twilight Zone Tower of Terror a Real Episode?

Contrary to popular belief, the Tower of Terror ride at Disney’s Hollywood Studios is not based on a particular episode of the Twilight Zone.

Instead it a melting pot of a few plot points and Easter Eggs from the original episodes.

As far as seeing Rod visually, archival footage from the famous episode “It’s a Good Life” was utilized.

Get your discounted HHN Tickets on Groupon TODAY!

Where is Twilight Zone in Disney World?

Once you head inside of Disney’s Hollywood Studios, you’ll make your way down the main welcome path of the park. You’ll then turn right onto the famous Sunset Boulevard.

As you began to make your way back, you’ll see the mysterious Hollywood Tower Hotel standing tall in the Florida sky!

Now the work really began and that was with the ride vehicle itself. The hotel elevator.

The Imagineering team worked with the Otis to create the vertical ride system while Eaton-Kenway created a vehicle that could bring itself forward.

Together, with Imagineering, they managed to create the specialized system.

Is Twilight Zone Tower of Terror a Roller Coaster?

Disney’s Twilight Zone Tower of Terror is not a roller coaster. The vehicles are self guiding, with the ability to move in and out of the elevators, through the fifth dimension scene in into the drop shaft.

The attraction has a dual system installed for a unique loop system. There are four shafts total that merge into two after the fifth dimension sequence then go into the single drop shaft.

After the vehicles are brought into the basement and unloaded, they are sent back up to do it all over again.

More Drops Added to the Disney’s Tower of Terror Ride

The attraction originally opened with one drop but since 2003, the attraction was installed with a randomized multi drop sequence selected by the computer. My personal favorite is when it drops and then the vehicle shakes a bit.

Believe it or not, you are not actually free falling on the attraction either. Cables attached to the bottom of the vehicle allow it to pull it down at a slightly faster rate than what a free fall actually would!

With the assistance of two huge motors with the ability to generate 275 times the torque of a Corvette engine, it allows for fifteen times the speed of normal elevators.

The goal for Imagineers was to give riders the motion beyond the thrill of a free fall while managing safety and the structural management of the tower. At 199 feet, it can reach speeds of 39 MPH (miles per hour).

The Eerie Architecture of the Twilight Zone Tower of Terror

The interior and exterior of the attraction gained its inspiration from actual landmarks like the Biltmore Hotel and features Spanish Colonial Revival architecture.

This was purposely chosen due to its color and to blend in with the color scheme of the Morocco Pavilion in EPCOT’s World Showcase in the distance.

When Did The Twilight Zone Tower of Terror Open at Disney’s Hollywood Studios?

It was originally going to have a holiday opening of July 4th, 1994, but it was decided that it would open with the Sunset Boulevard expansion of MGM Studios on July 22, 1994.

Get all of your Disney Halloween merchandise over on ShopDisney.com!

Let’s start backwards a bit! One stormy night in 1939, five guests entered an elevator in the Hollywood Tower Hotel.

The hotel itself was full of glitz, glamour and as Serling states, a star in its own right. The guests who enter the elevator are a child star and her nanny, a celebrity couple and a bellhop helping with bags to the rooms.

Suddenly, a lightning bolt strikes the tower of the hotel causing all five people, the elevator and an entire wing of the hotel to disappear seemingly into the Twilight Zone!

Since the incident, the hotel was promptly abandoned and has sat dilapidated ever since.

As guests go through the overgrown gardens, you will find yourself at the front of the hotel being ushered through the hotel lobby and into the quaint library.

Shortly after, it suddenly thunders loudly and lightning strikes causing the power to go out.

The TV set then comes on, showing Rod Serling telling the tale I just shared and letting you know that you will be boarding a service elevator to become the next stars of…the Twilight Zone.

I won’t give too much away but trust that what I have shared will not take away from the immense detail that Imagineering put into the attraction.

Riders will plummet at 39 MPH (miles per hour) while hitting 1.3 G forces. The ride experience is a total of a little over 3 and a half minutes.

Disney Twilight Zone Tower of Terror ride vehicle can seat 21 people at a time and has a total of 8 vehicles.

Now let’s look at some fun facts about the amazing and mysterious attraction!

My Final Thoughts on the Disney Twilight Zone Tower of Terror

There is so much more to the story behind one of Disney’s most audacious and continuously beloved attractions.

And while the Disney California Adventure version has been lost to make way for the epic Guardians of the Galaxy: Mission Breakout, you can visit the other versions at Tokyo Disney Sea and Disneyland Paris.

Turning onto Sunset Boulevard, you are immediately drawn to that mysterious towering hotel, curious to see what lies inside. I recommend watching the “Behind the Attractions” series on Disney+.

It will give you a feel for the work that goes into one of the best attractions Disney ever created. And to think that it almost ended up in Disneyland Paris’s Frontierland!

Join the Conversation on the Solo Disney Traveler Community on Facebook!

Until next time, Happy Hopping Hipsters!

If you loved this article, then you’ll love these: