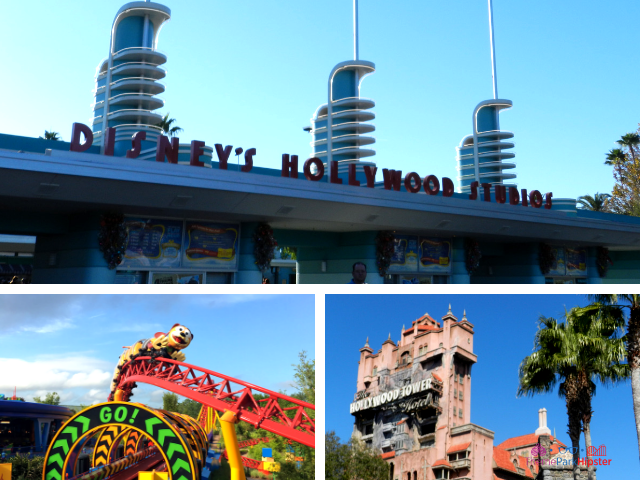 Do you know what the best Hollywood Studios rides are?

If not, don’t worry!

Today you’ll uncover the Top 10 Hollywood Studios shows and attractions you have to do on your next solo Disney trip.

Disney’s Hollywood Studios takes you back into the classic sunny days of California’s most famous city.

The Hollywood Studios rides, attractions, and dining experiences all make for world-class entertainment that can be enjoyed for all ages.

Hollywood Studios was once known as Disney-MGM Studios when it opened in 1989. It has always been a great half-day theme park for those visiting Walt Disney World solo.

However, it is now a park that is spectacular to discover for over a whole day.

The addition of Toy Story Land and Star Wars: Galaxy’s Edge, has made Hollywood Studios a competitive theme park.

Hollywood Studios offers many activities that can be thoroughly enjoyed.

Adventures such as, the Hollywood-inspired theatrical shows, terrifying yet amazing rides, and the all-in dining–entertainment experiences offered at such places as:

The cool thing about Hollywood Studios is that the attractions and shows are not too far apart, which makes it easy to navigate the park and do everything in one day.

In order to get all your Hollywood Studios must do’s, I suggest doing a bit of researching on the web and writing everything down you want to accomplish.

Before you go through the best attractions, get you Hollywood Studios Orlando Itinerary Game Plan here!

These are also Hollywood Studios BEST rides for FastPasses.

Your Must Do Hollywood Studios Rides, Shows and Dining

10 – Watch Beauty and the Beast- Live on Stage

This memorable musical production is located on Sunset Boulevard.

It goes through an abbreviated version of the famous Disney movie complete with talented performers, dancing kitchen ware, and quite a few famous faces.

Located in the Echo Lake section of the park, the Indiana Jones Epic Stunt Spectacular is another Hollywood Studios must do attraction.

I’m still a classic Hollywood Studios fan, so I love when Disney takes you behind-the-scenes to show you how the movie magic is created.

During this high-energy stunt show, you get to cheer on Indiana Jones and Marion as they perform amazing stunts to show you how Hollywood makes film-making comes to life!

You can even be chosen to participate in this EPIC show, just by raising your hand for the “casting call” when the casting director steps on stage to select adult volunteers.

A classic drive-in theater with food inside Walt Disney World sounds pretty awesome to me!

The Sci-Fi Dine-In Theater Restaurant allows you to have a movie and dinner, but in a 50s-inspired drive-in theater. It features an all-American cuisine and famous sci-fi movie clips.

On your Smugglers Run adventure, you’ll go on a recruited mission from Hondo Ohnaka where he’ll reward you with galactic credits upon your arrival and if the ship is still in good standing.

As with any Star Wars story (or Disney attraction) things never seem to go right and you will have to make your way out of the hairy situation in this interactive simulator ride.

While on the ride, you will get put into one of the three positions:

Based on your team and skill level, it will determine just how well you will do on your mission. Also, if you have any sensitivity to motion simulators you might want to skip this one.

Hipster Power Tip: On your first ride you should wait in the stand-by queue to see the incredible theming of the attraction and get some great views of the Millennium Falcon and Star Wars: Galaxy’s Edge.

There is a Single Rider Line available on this ride for us solo Disney travelers.

While you’re patiently waiting for Stars Wars: Galaxy’s Edge to open, I suggest you get in to spirit and explore Star Wars Launch Bay inside the Animation Courtyard.

Be sure to meet and hang out with Kylo Ren at Star Wars Launch Bay.

After you discover the Launch Bay, you’ll have to take a ride on Star Tours: The Adventures Continue.

The Star Tours ride allows you to board a Starspeeder 1000 and travel to different locations from the Star Wars films, with over 50 adventures to participate in.

This 3-D flight simulator will have you encounter some of your favorite friends for the Star Wars universe such as: R2-D2, C-3P0, Yoda, Chewbacca, and possibly Darth Vader.

You’ll also want to cap your night off with the Star Wars: A Galactic Spectacular.

It’s an out-of-this-world fireworks show that combines the Star Wars saga with lasers, projections, and music to make you feel a part of that world.

Toy Story Land is a gem in its own right. Being shrunk in Andy’s backyard, sends you into a fun sense of nostalgic charm.

The new addition to Disney’s Hollywood Studios, Toy Story Land, has fans of both brands frolicking to the park in large numbers.

Toy Story Land is based off the Disney-Pixar franchise that stars Woody, Buzz, Jessie and the whole crew!

Before you even get to Hollywood Studios you’ll want to route your path around Toy Story Land in advance by downloading a map online or on your phone.

You can also chat with an authorized Disney vacation planner to help you make the most of your trip.

My recommended Toy Story Land Itinerary for you:

4 – Dine with an Imagineer

Yes! You can actually do this. I really hope that I’m able to dine with a great thinker on the Disney Imagineering staff.

This experience will give you the opportunity to chat with a Disney Imagineer over a four-course meal at the Hollywood Brown Derby.

You will get to learn more about the creative process it takes to make Disney magic.

This Disney dining experience is for guests aged 14 years or older.

This roller coaster is an absolute must do at Disney’s Hollywood Studios.

All this to get you soooo excited to join the Aerosmith gang on their Hollywood adventure!

Rock ‘n’ Roller Coaster has a high-speed launch of 0 to 60 m.p.h. in ONLY 2.8 seconds with three inversions and an Aerosmith soundtrack to completely mask your high-pitched screams.

Don’t miss out on this one-of-a-kind indoor ride.

2 – Dive Deep on the Twilight Zone Tower of Terror

The Twilight Zone Tower of Terror is another must do Hollywood Studios attraction located on Sunset Boulevard.

It has an incredible theme, an absolutely unique storyline, and is one of the BEST attractions on Walt Disney World property!

The whole ride is engulfed in mystery from the queue line to the final drop.

You’ll be immersed in the story of the missing Hollywood starlets who were never seen again…until it’s your turn to pay the ultimate price.

Just when you think it’s safe to explore the hotel, you’ll hurdle down 13 floors with absolute weightlessness into to the pits of the Twilight Zone!

1 – Join the Fight in Star Wars: Rise of the Resistance

Of course, this is the BEST ride at Hollywood Studios!

Rise of the Resistance is unlike any other attraction in the world.

This experience puts you in the middle of the turmoil between The Resistance and The First Order.

You will get captured and taken into a First Order Star Destroyer to be interrogated by Kylo Ren.

But somehow, help comes to take you on an out-of-this-world adventurous escape back to the hidden Resistance base.

My experience on this attraction made me feel as if I was going through four different types of ride systems.

It is not something I can truly describe, but if I had to, I would say it’s a combination of the Pirates of the Caribbean ride in Shanghai and Star Tours.

Voyage of The Little Mermaid

This memorable musical production is located in Animation Courtyard.

It goes through an abbreviated version of the The Little Mermaid movie complete with aquatic performers, live actors, songs to singalong to, and quite a few famous faces popping up.

If you are a fan of anything Disney, then you MUST check out Walt Disney: One Man’s Dream located in Animation Courtyard.

It is an exhibit that takes you through the legacy of Walt Disney’s visions.

It is a self-guided tour that allows you to see never-before-seen props, models, sketches, photos, and more of not only the history of Disney Parks, but also the journey of Walt Disney himself!

You’ll also get to see a one-of-a-kind video at the end of your tour.

As you can see, Disney’s Hollywood Studios has something to offer anyone for any type of Disney trip.

If this is your solo Disney trip, then this is a time for you to do Hollywood Studios your way!

Don’t forget to have you Hollywood Studios tickets purchased before your trip!

Let me know if any of your favorite Hollywood Studios rides or attractions made the list in the comments section below.