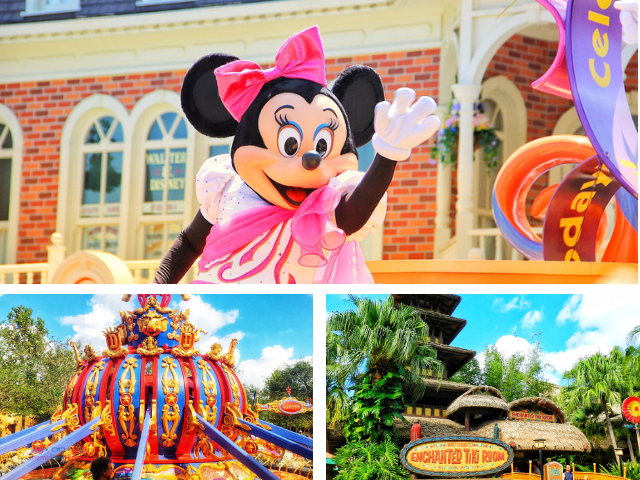 What you do not know is while we think we may see all that the Magic Kingdom has to offer, there are quite a few Magic Kingdom secrets you should take note of on your next Walt Disney World vacation!

Disney’s Magic Kingdom opened on a glorious day in October of 1971. That charming day has led to the start of millions of magical memories from the old to the young.

The Magic Kingdom is divided into six lands:

The lands are centered around the hub, which is Cinderella Castle. This is especially important to note when planning and mapping out your trip to discover each hidden gem.

Main Street U.S.A. is bordered by red pavement to give you the Red Carpet Treatment.

In honor of the year Magic Kingdom was opened, you get the name of Fire Station 71.

3. Lady and the Tramp in Tony’s Town Square

Tony’s Town Square is named after the restaurant where the main characters from Lady and the Tramp enjoyed their famous meal.

4. Disney History in the Windows

Second story windows have names of fictional businesses with real-life Imagineers, artists, and other significant people in Disney history.

5. A View for Everyone

Store windows on Main Street are lower than normal to allow little ones the ability to see through them.

Use the wall-mounted phone in the General Store and listen to a hot party line.

If you turn on the first street right off of Main Street, you may hear some singing and dancing lessons near the small café area.

Fantasyland is actually on the second floor. The first floor is known as Utilidors, which are used to house offices of the Magic Kingdom.

Cinderella Castle appears much higher than it really is by using forced perspective.

The world-famous castle in the Magic Kingdom is actually called Cinderella Castle NOT Cinderella’s Castle.

On the side of the castle is a fountain with Cinderella on it. Take a drink from the water fountain and you’ll automatically be bowing down to a princess.

The first person who walks inside Tinker Bell’s Treasures will be given the opportunity to “awaken Tinker Bell.”

At Pooh’s Playful Spot is a tribute to the 20,000 Leagues Under the Sea attraction. Find the picture of a submarine on the inside of the tree’s front door.

There’s also a tribute to Mr. Toad’s Wild Ride inside the Many Adventures of Winnie the Pooh attraction. When you enter Owl’s house, look back and find the picture on the wall showing Mr. Toad handing the deed to his house to Owl.

On Peter Pan’s Flight find the building blocks by Wendy’s bed that spell out P Pan and D Disney. Making this a Magic Kingdom must do!

Each section of the Columbia Harbour House is dedicated to a ghost ship or a ship lost at sea.

Hipster Power Tip: Did you know that there’s a Magic Kingdom secret menu??? You can learn more about it here!

18. No restrooms in Liberty Square

There are no restrooms in Liberty Square (besides ones required in restaurants) to mimic the time period.

Pay close attention to Madame Leota’s tombstone. Her eyes may magically open for you.

20. Gargoyles in the Haunted Mansion

As you leave the stretching room of the Haunted Mansion, listen for gargoyles talking. They are making sure you “stay together.”

There’s a replica of the pipe organ from the film 20,000 Leagues Under the Sea in the ballroom scene of the Haunted Mansion.

22. Tony the Tiger in the Haunted Mansion

One of the singing statues in the Haunted Mansion was the voice of Tony the Tiger from Kellogg’s Frosted Flakes!

Near the telegraph office, you will hear Morse code of Walt Disney’s opening day speech at Disneyland in California.

25. A False Splash on Splash Mountain

The splash on Splash Mountain is not cause by the log-flume, but by a water-cannon hidden in the landscaping.

While on Big Thunder Mountain Railroad, look towards the window on the second-floor of the saloon to see the “wildest party in the Wilderness” in progress.

27. Listen out for Pirates

On Pirates of the Caribbean, as you board your vessel look for a tunnel on your right and listen closely for pirates digging.

28. Illusion of a Straw Hut

While waiting for the Jungle Cruise, look for the small hut. Believe it or not, the “straw” on the roof is actually metal.

29. Listen to Your Space Friends

There’s a special phone booth in Tomorrowland where you can pick up the receiver and listen to something interesting. The booth is located near the Lunching Pad quick-service counter (under the Tomorrowland Transit Authority and Astro Orbiter).

The TTA (Tomorrowland Transit Authority) was once known as WEDway Peoplemover after Walter Elias Disney.

Towards the end of your TTA experience listen for the paging of Mr. Tom Morrow.

Before when end this hidden Magic Kingdom secrets guide, let’s go over some of the most common questions I’m asked.

What are the best things to do at the Magic Kingdom for adults?

What Should I Use My FastPass on at the Magic Kingdom?

As you can see, the Magic Kingdom theme park has so many hidden gems ready for you to discover if you know where to look. On your next solo Disney trip, make it a fun game to discover each little secret.

Let me know which Magic Kingdom secret was your favorite in the comments below!

Get more of your Disney questions answered below:

Now go out and have fun!