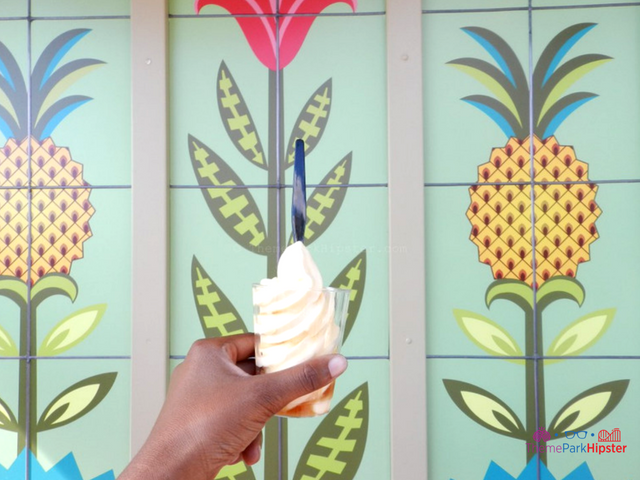 Do you know where to find Dole Whip in Disney World?

Why is it so fascinating and why are we obsessed with it?

Walt Disney World magic can be found all over the resort, but one must have treat that encompasses all that enchantment is the pineapple Dole Whip.

There was a time when obtaining this legendary snack was hard to come by, but since the demand has skyrocketed over the past few years, you can now find it in multiple locations if you know where to look.

The Dole Whip is the most popular Walt Disney World snack among Disney enthusiasts. Even beating out the famous Mickey Mouse  ice-cream ears.

The cult following behind the Dole Whip is the real deal!

In this article I will answer the following questions:

What is a Dole Whip at Disney World?

The most popular Dole Whip at Disney is the pineapple-flavored soft-serve frozen dessert made from puree and reconstituted with water. It is then frozen and served to Disney guests.

Where Can You Find Dole Whip in Disney World?

Here’s a full list of places you can visit and try this tasty treat at the Walt Disney World resort.

The Aloha Isle location offers pineapple Dole Whip and vanilla Dole Whip, plus you can get it swirled.

You can find the Aloha Isle spot in Adventureland next to the Enchanted Tiki Room and by the Magic Carpets of Aladdin.

A Dole Whip Pineapple Upside Down Cake is also available if you want to step up your Dole Whip game!

Hipster Power Tip: Aloha Isle is also one of the location where Mobile Ordering is offered. A option for you to avoid waiting in line.

A post shared by American Attractions (@americanattractions) on Jul 9, 2018 at 1:07am PDT

You can now enjoy a delicious cup or a cone of the famous pineapple soft service in the food court of Disney’s Pop Century Resort.

Marketplace Snacks is located directly across from the Marketplace Co-Op within Disney Springs. This is a perfect option for you if you’re not visiting the actual parks.

It’s also one of the few places to find Dole Whip in Disney Springs.

If you’re visiting the Polynesian Village Resort the you have to grab a Dole Whip and a great lounge chair to relax.

The Pineapple Lanai is located on the ground floor of the Polynesian Resort’s main building.

Ready to start planning your next Disney vacation? Listen to the latest podcast episode on Apple or on your non-Apple device now!

During the annual Epcot Flower & Garden Festival you can grab you pineapple soft serve fix at the Pineapple Promenade.

This is one of the very few places to find Dole Whip in Epcot.

There’s Dole Whip in Animal Kingdom at Tamu Tamu inside the Africa section at the Harambe Marketplace.

Animal Kingdom’s version gives you the option to add alcohol to your Dole Whip concoction.

This is an absolute must do!

Hipster Power Tip: If you choose to sit inside of Trader Sam’s, this option may not be on the menu. Don’t worry! Just ask your server for it and they’ll get one for you.

The Sunshine Tree Terrace location offers orange (citrus) Dole Whip and vanilla flavored soft served with the option to get them swirled.

Pineapple Paradise is described on the menu as “delicious pineapple freeze.” There are mixed reviews as to whether it tastes like an actual Dole Whip.

What’s New at the Parks

You can now try one of the newest flavors of soft serve available in Walt Disney World:

What You Should Know About Dole Whips

Now that we’ve went through where to find Dole Whip in Disney World, let’s go through some questions and information you should remember.

Is Dole Whip a snack credit?

You can currently obtain a Dole Whip using a snack credit (1). In my opinion, this is a must have treat on your Disney vacation.

So go ahead and use that snack credit!

What are the Dole Whip ingredients?

Ever wanted to know what was in the famous Pineapple Dole Whip? Below are the ingredients you can find in this Disney classic treat.

This is what Dole Whip is made of: Can I get a Dole Whip with rum?

Listed below are the current places offering Dole Whip with a touch of adult libations to complete your Disney paradise.

Where to Find Dole Whip in Disney with Alcohol:

Before you head out to the parks or if you need a little bit of Disney love at home, you can get your Dole Whip fix below!

As you can see, there are so many places to find Dole Whip in Disney World. You should have fun finding them all.

Did I miss a Dole Whip location? If so, leave a comment in the box below to let us know where we can find more Dole Whips in this scavenger hunt!

Scroll back to top
103shares