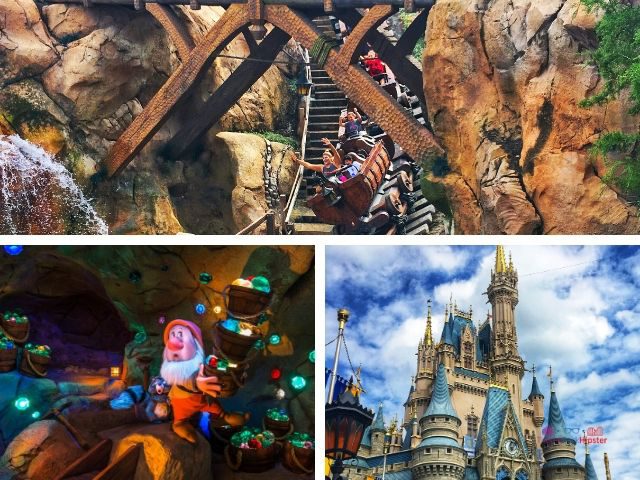 Walt Disney’s very first animated feature film was Snow White and the Seven Dwarfs, which has been represented at the Disney Parks for years.

Now at Walt Disney World the original princess has a brand-new ride in her honor called Seven Dwarfs Mine Train, right in the middle of Fantasyland!

The three-minute roller coaster ride is fast, with some elements that might be scary for younger kids.

I’m sure you all are familiar with the story of Walt Disney, how he first drew Mickey Mouse on a train ride, and the rest is history. The story is quite inspiring really, he was just an animator, and not a very well-paid one at that.

Which brings us to present day New Fantasyland which had undergone an intensive refurbishment in 2012. The Magic Kingdom’s land was expanded from 107 acres to 133 acres to occupy the new improvements that would be made to Fantasyland.

When the 20,000 Leagues Under the Sea ride was taken down due to technical issues, there was a 10-acre gap in Disney’s most popular land. Something had to replace it.

There were numerous trials and tests done because it was to be a ‘family-friendly’ ride. Nonetheless, huge crowds turned up at the opening on May 28, 2014 and the ride has one of the longest wait-times in Walt Disney World.

Fast forward to modern-day Magic Kingdom, and the idea to create something new inside Fantasyland. In fact, the entire land was almost all redone to make room for new experiences.

Those experiences included Princess Fairytale Hall, Storybook Circus, Enchanted Tales with Belle, Under the Sea- Journey of the Little Mermaid, and Seven Dwarfs Mine Train.

The ride layout takes guests on an indoor and outdoor coaster adventure. You’ll experience big drops and slower hills. The entire premise of the ride is that you’re taking a peek at the dwarfs mine where a million diamonds shine!

The ride does take a large time commitment, not because of the actual ride time, but because of the wait time, which can be over two hours on busy days at Magic Kingdom.

The best way to not have to wait hours to ride the family-friendly attraction is to either get a FastPass reservation or head there first thing in the morning just after the park opens!

The stand-by queue for the attraction has several interactive games and play areas to keep you entertained as you wait.

When you finally get to the loading area, strap yourself in the rickety mine train just as Heigh-ho starts playing in the background.

The train moves slowly into the bright daylight and encounters a steep turn. That is when you realize that what the ride lacks in inversions, G-rolls and all that fancy stuff, it makes up by having a swinging train.

Yes, each car on the train has an individual swing, making it even more fun!

After taking a tour of the Dwarf’s mine you’ll go down one final drop before spotting the finale scene with the Dwarf’s cottage and Snow White inside dancing.

Keen eyes will also spot the old hag who is waiting to give Snow White the poison apple.

The train of the Seven Dwarf Mine Train ride is a one-of-a-kind swinging roller coaster. The coaster is designed to look like the cars that the Dwarf’s carry their treasures from the mine in.

Note that the actual seats and lap bar situation feels a little tighter than other Walt Disney World attractions. While most people will fit, it will feel snug.

This is because Walt Disney Imagineering wanted guests to feel like they were a Dwarf as well and Dwarf’s require smaller seats to feel secure.

If you remember listening to a bedtime story of Snow White and the Seven Dwarfs, you had always wanted a closer look at their cottage, maybe a peep into their window.

Or maybe you wanted to join the dwarfs at the mine for a day.

Don’t let your inner child down.

Go and explore Fantasyland to your heart’s content. Going to theme parks with other people is nothing but a social construct, so don’t get caught up in it.

What are you waiting for? Go tick this ride off your childhood bucket list!

UP NEXT: 21 Magnificent Things You Must Do at Magic Kingdom – The Ultimate Checklist