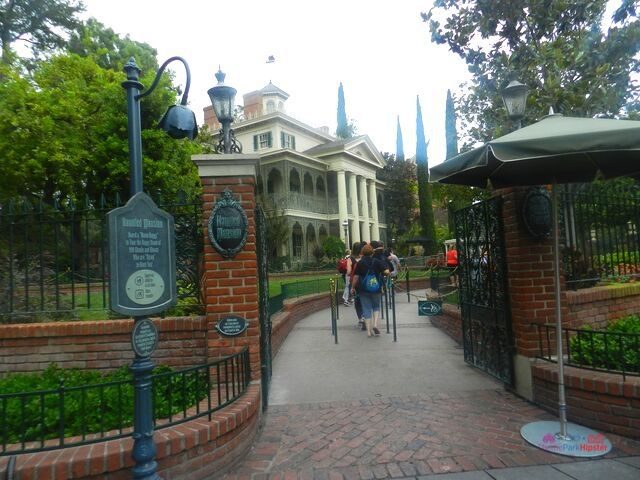 Disney’s Haunted Mansion is one of the top attractions among ThemeParkHipsters, so much so that there is a large fandom that encompasses fan fiction, meetups, collectibles, comics, and numerous pop culture mentions around the world!

The Haunted Mansion at Disney

I’ve always enjoyed the ride, but I could never quite ride it alone (no surprise there).

I know you’re probably thinking that I may be a bit weird because it’s just a Disney ride that is nowhere near the haunting frights of Universal’s Halloween Horror Nights.

However, I always feel something very eerie and spooky about the attraction that makes my skin crawl all the while keeping the quirky, imaginative spirit of Disney.

This dark ride puts guests in the Doom Buggies who are given a haunted tour of the mansion by the famous Ghost Host (voiced by Paul Frees).

My First Experience on the Disney World Haunted Mansion Ride

I can still remember my first time on this ride in the mid-nineties and how the Ghost Host and the spooky greeters with their dragging, dreary voices would always give me the creeps.

And let’s not forget the parlor scene that stretches not only the room, but also your imagination with a visual trick that is pretty impressive and still a classic staple of the attraction.

Hipsters there’s no way we can forget Madame Leota.

The mysterious medium whose head is famous for its flotation ability and whose chants can blur the line between the natural and supernatural realities of this world.

Once you think you’ve survived the spine-tingling tour you gain some famous guests on your Doom Buggie, the Hitchhiking Ghosts…

…and from what I’ve observed these guys are Haunted Mansion rock stars!

In this article we’re going to focus on the Disneyland and Magic Kingdom Haunted Mansion attractions. I was able to find some of the weirdest and most mysterious facts surrounding this legendary Disney attraction.

Enjoy and hopefully you won’t be added to the 999 happy haunts!

1. This attraction can be found all over the world:

A doctor and medical lawyer, Cary Sharp, donated $37,400 for a charity event held at Disneyland to become the 1000th ghost!

…a man “forever buried in his work.”

3. Who’s Buried in the Tombstones?

Many of the names on the tombstones are from real who were connected to the Disney brand.

The iconic grim bride with the bright red heart name is Constance Hatchaway.

The Hatbox Ghost was originally a part of the attraction at Disneyland. However, the “HatBox” trick never lived up to the title, so it was axed.

Over the years, the loyal followers still kept The Hatbox Ghost memory alive and in 2015, Disney gave us a new Hatbox Ghost for Disneyland’s 60th Anniversary Diamond Celebration.

This is one of the coolest Haunted Mansion ride secrets!

The Haunted Mansion was briefly developed as a water ride by Imagineer Claude Coates.

7. Live Caretaker in the Movie

The original concept of the Haunted Mansion film script had a live Caretaker as one of the main characters, but was later scrapped.

The Disneyland Haunted Mansion was rumored to have been inspired by the Shipley-Lydecker House in Baltimore, Maryland.

However, Ken Anderson, the original storyteller of the ride, found the most inspiration in a catalog of Victorian decorative art and architecture he was looking through at the time.

The well-known Haunted Mansion bride was one of the few characters who was almost always featured in the many versions of the Disneyland Haunted Mansion storyline concepts.

X. Atencio is considered to be the unofficial lord of the manor.

The Haunted Mansion wallpaper was a collaboration between Museum of the Weird creator Rolly Crump and Claude Coats.

At Madame Leota’s tombstone, watch closely as her eyes may open

15. Gargoyles in the Haunted Mansion

As you leave the stretching room of the Haunted Mansion, listen for gargoyles talking. They will be there to make sure you all stay together.

This is one of my favorite Haunted Mansion secrets!

There’s a replica of the pipe organ from the film 20,000 Leagues Under the Sea in the ballroom scene of the Haunted Mansion.

17. Tony the Tiger in the Haunted Mansion

One of the singing statues in the Haunted Mansion was voiced by the same man who did Tony the Tiger from Kellogg’s Frosted Flakes! His name was Thurl Ravenscroft.

18. Stretching Room Plays Tricks on You

The stretching room of the Haunted Mansion in Disneyland California is an elevator that takes you underground.

After the “real” Madame Leota died, Disney wanted to update the film. Disney then used her daughter, Kim Irvine, to help create the newer footage

It has been rumored that Walt Disney recorded a narration of the Haunted Mansion in an earlier drafted version of the ride.

In the Haunted Mansion movie, the Gracey family is named after Imagineer Yale Gracey who helped create the Seance Room with Madame Leota.

Pepper’s Ghost is a famous illusion from the 1800s that can be seen with the ghost dancing in the Grand Ballroom scene.

This is one of the top Haunted Mansion secrets that we all love!

You can find the famous Hitchhiking Ghosts at the end of the ride inside your Doombuggy. Disney uses the Pepper’s Ghost illusion to pull off this trick.

Hopefully, it’s just an illusion and you don’t take one home with you.

Another earlier concept of the Haunted Mansion put it as a walk-through experience that would’ve had a boat pull up to you in one of the rooms.

The only problem with this concept, is that this portion of the attraction would only hold a few people and would take too long. This is not a good thing for keeping the attraction flow moving optimally.

Believe it or not, the exterior of the Haunted Mansion at Disneyland was completed in 1963, but it did not open officially until 1969.

One of the earlier concepts of the Haunted Mansion was to be The Museum of the Weird with both haunted and mysterious trinkets from around the globe.

The Doom Buggy, the vehicle that takes you through the Haunted Mansion, is also known as an Omnimover (you can see a similar vehicle in Spaceship Earth at Epcot).

28. Find a Hidden Mickey in the Mansion

Try to find the Hidden Mickey in the famous ballroom scene (hint, hint…check the table).

Believe it or not, there’s an actual bullet hole in the Disneyland Haunted Mansion. While on the ride look towards the end of the ballroom scene where the two portraits are shooting at each other.

The bullet hole is rumored to be there and is sometimes covered with a spider.

The Hitchhiking Ghosts have names dubbed by the fans. The names are Gus (the Prisoner), Phineas (the Traveler), and Ezra (the Skelton). This fact is one of the most unique Haunted Mansion secrets.

The Haunted Mansion in the Magic Kingdom has an interactive queue line that is just as mysterious as the ride.

The Haunted Mansion cost $7 million to create when it was developed and built.

33. Films that Inspired the Haunts

Some believe that there are three films that inspired the attraction:

In the Florida Haunted Mansion, look for a tombstone with J. Thaddeus Toad. This is a nod to Mr. Toad’s Wild Ride.

Look for the “Bride’s ring” when you exit the Haunted Mansion ride in the Magic Kingdom.

37. True Story of the Bride’s Ring

There were many stories of how the ring was left in the cement out the exit of the Haunted Mansion. Originally there was no backstory since it was the trimmed-off end of a metal post.

Did you know that there’s a portion of the Haunted Mansion that signifies your death?

When you fall from the attic window, your doom-buggy goes backwards. It is at this point that the haunts of the estate will now start to recognize you.

If you want to get out of the stretching round room first, then stand near the painting of the tight rope lady holding the parasol at the Magic Kingdom in Walt Disney World.

Look out for the raven throughout this Disney ride. It’s a reference to Edgar Allan Poe.

An original storyline of the ride involved a pirate named Captain Gore and his wife Priscilla who lived in a mansion where his wife discovers his hidden dark past as a pirate. She is then murdered by her husband who then hangs himself.

You may be able to see aquatic nods to this Captain on the attraction.

Believe it or not, there have been Disney guests who have tried to spread the ashes of their loved ones on the Haunted Mansion ride.

Look for Master Gracey “hanging” from the ceiling rafters in the stretching room scene.

45. Look for a Mysterious Figure

At the Haunted Mansion in the Magic Kingdom during the night, look up towards the top window and you may see a ghostly figure passing by…

When you are exiting the waiting area of the Haunted Mansion in Disney World, look at the top corner moldings which are shaped as skulls.

47. Monitor the Changing Weather on the Haunted Mansion Ride

As you go through each room, you notice the change in the storm that will subside for just a bit once you make it to coffin room. 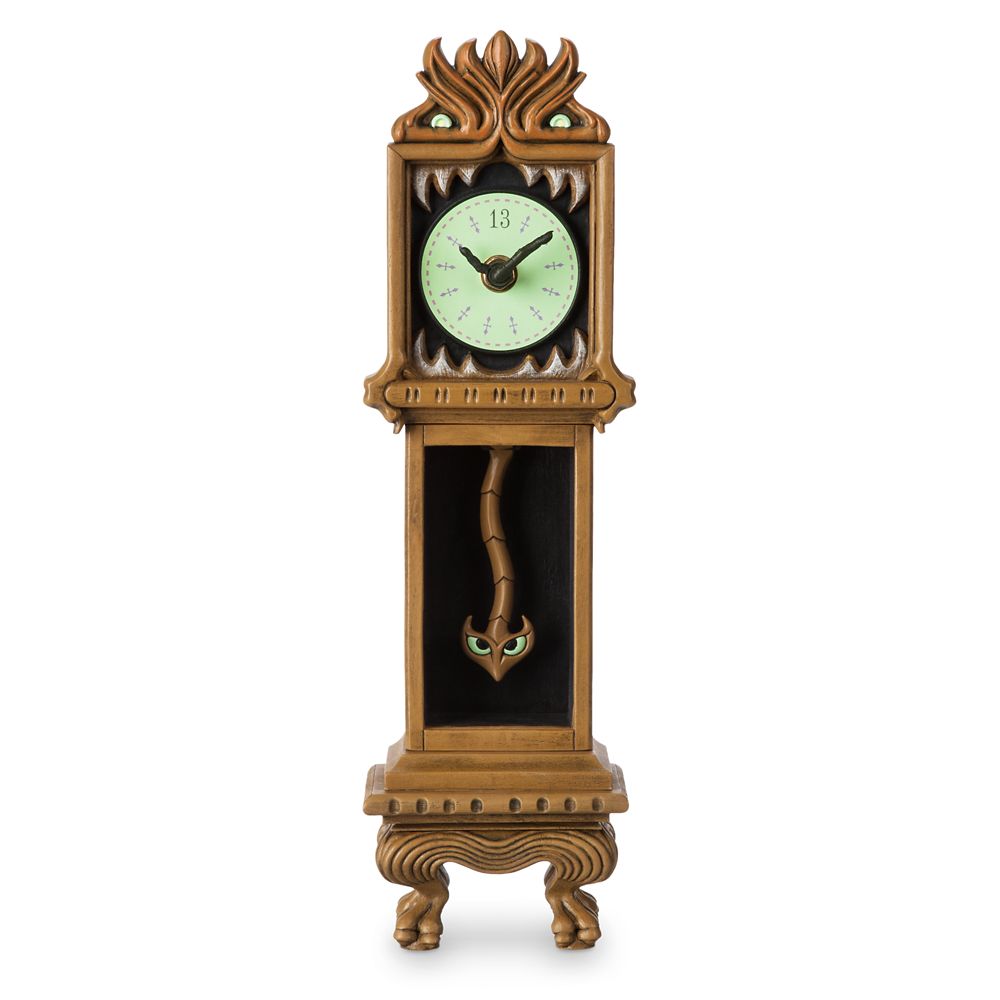 Look closely at the creepy 13-hour clock, you may notice fingers instead of the normal features of a clock.

On my quest to find more information about this unique fandom I learned that it is more than a simple Disney attraction.

The Haunted Mansion has captivated its followers with the brilliant story-telling passion that Imagineers, such as Yale Gracey, Ken Anderson, and Claude Coates, put into telling the fantastic fables of the gloomy inhabitants.

Despite all of the constant storyline changes and disagreements among creators, this lighthearted “Ghost Retirement Home,” has become a staple Disney attraction across the world.

I also learned that devout fans are aware of all things Haunted Mansion, such as the soundtrack secrets, the history behind the early concepts, and the back story of each ghoulish creature just to name a few.

There are even fan-based websites that focus on a single entity of the attraction. This aspect keeps the true fans of the grim grinning adventure loyal for the rest of their mortal lives.

Which Haunted Mansion secret was your favorite? Let us know in the comments section below.

If you loved this article, then you’ll love these: