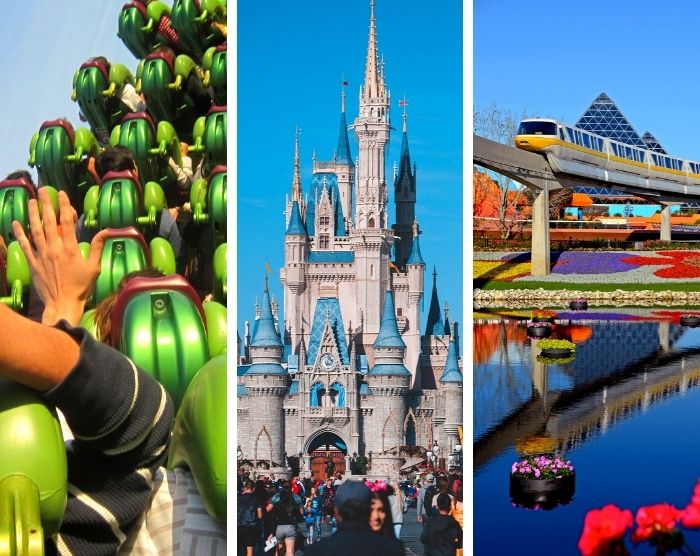 Are you wondering what is the BEST theme park in Orlando for your vacation?

And it is for you (my amazing ThemeParkHipster) that I am going to brave this storm and find out:

They each will give a short speech about why they are in the running to be the Best Theme Park in Orlando. And why they should win.

Then I’m going to hand the mike to the judges (or judge I guess, since it’s the crew here at ThemeParkHipster).

So let’s begin this exciting journey where we get to know the theme parks a little before we decide: Which one is the BEST Theme Park In Orlando!

Give it up for the theme parks everyone!

“Classic. Timeless. Essential. That’s what I am.  I am the soul of Orlando. And I was here before it was cool to be a theme park. So, move over newbies, the queen is here.”

Who would miss a chance to meet Disney’s greatest stars?

Disney’s Magic Kingdom has been a part of Orlando since 1971. Not only is it the first of the Disney’s parks in Florida, but it is also the most well-known one.

This sprawling theme park has six different themed areas and requires three full days to explore thoroughly. It represents what generations of Disney-lovers have grown up with wrapped up into a fun family-friendly package.

I would say the only drawback to the Magic Kingdom is the lack of thrilling rides.

But some people believe that Disney has lost its magic. They say it has become no different from other theme parks and accuse it of becoming profit-oriented.

Read: 21 Magnificent Things You Must Do at Magic Kingdom (Best Rides, Attractions & Food)

“Don’t even bother going through the rest of this list. You’re looking at the winner. I mean, great rides and cute, fuzzy animals? Who can compete with that?”

You can go trekking up Mt. Everest or lose yourself in the otherworldly land of Pandora. Travel back in time to see dinosaurs or visit live animals with the Kilimanjaro Safari, either way, it is a learning experience.

If you’re feeling a little fancy, they also have a Broadway show of The Lion King and a Finding Nemo musical.

The latest addition to Disney’s theme parks is a real adventure– with a heart-warming message.

The pandemic has been hard on all Disney Parks with complaints of long lines and sudden ride closures.

Another popular gripe about Animal Kingdom is the lack of thrill rides. With just three thrill rides, some reaching two-hour-long waits, Disney Guests at time do put this park towards the bottom of their must-do list.

“Is there any other theme park where you can have drinks from 11 different countries at the same time? I thought not. I offer my guests the world– literally. And being crowned Best Theme Park of Orlando would be the best thank-you I could get for that.”

When you can’t disapparate or use Floo Powder, Epcot might be your best bet to explore the world (or 11 countries at least) for cheap.

But don’t worry, there’s still a touch of Disney’s magic here. This is one of the parks truly inspired  by Walt Disney himself!

Young Disney fans will adore the Frozen Ever After Ride and snorkeling in the Finding Nemo attraction. Adult travelers will want to time their visit to coincide with one of many jaw-droppingly amazing festivals Epcot hosts regularly.

Surprisingly enough, out of all the Disney parks, Epcot has the least number of bad reviews.

However, most people are grumbling about the consequences of the pandemic. After all, with so many interactive elements missing and so much construction going on at the park, paying full price would make anyone cranky.

There is also an ongoing complaint about the price of food and drinks, but hey authenticity is expensive.

“Whether you’re a Star Wars person or a Beauty and the Beast kind, I’ll always have something you can have fun with. I let step into the silver screen. Isn’t that something you’ve been dreaming of?”

The entire Disney brand is centered around the movies. If the words ‘Jedi Training’ aren’t enough to make you buy tickets, the Tower of Terror and Toy Story Land will do it.

And don’t worry, Disney staples like Beauty and the Beast and Frozen are still on the a part of your adventure.

This theme park is a Hollywood-style extravagant celebration of Disney’s years on the screen.

Some (unnamed persons) have recently dared to say that Disney’s Hollywood Studios isn’t as an immersive an experience as Universal Studios.*ducks under table*

Apart from the usual pandemic-related qualms, there is only one outstanding grumble. Many stringent Disney fans complain about the low number rides and attractions at this park.

Read: Top 10 Hollywood Studios Rides and Attractions You Must Do

“Yer’ a wizard ‘Arry! Remember how much you loved that line? Yeah, that is me. I rest my case.”

Yes, I know I promised to be unbiased. But how can someone beat Harry Potter, The Simpsons, Transformers AND The Mummy?!

We all have watched these movies at least ten times (each). Plus, we love/hate the characters with all our collective hearts. AND we have always dreamed of being a part of their world.

Universal Studios blends roller coasters and blockbusters to give just the right amount of thrill, excitement and joy. It cannot be missed.

While people have been complaining about the long wait times and pricey food since the park opened, the pandemic has led to more grumbles. Especially with parks filling to capacity quickly (due to limited amount of visitors allowed at one time).

Universal Studios has also been going to great lengths to ensure the safety of the park guests. While most people appreciate these efforts, some have complained about the staff being nit-picky and rude.

“I call upon my brethren– the adrenaline junkies, to back me up on this: No one can beat Hogwarts, Dr. Seuss and Spiderman all rolled together into one thrilling theme park. And that theme park is me, baby!”

Not everyone who goes to a theme park falls between the ages of 5-10 years. And that’s why many theme park fans love Islands of Adventure!

People go to this park for the thrills (and the Butterbeer).

You can try to escape the escaped dinosaurs in Jurassic Park or run alongside King Kong on Skull Island. You can take a ride on Hagrid’s motorbike or jump skyscrapers with Spiderman.

Whatever thrill you seek, there’s a good chance that the Islands of Adventure can give it to you.

People have always groaned about theme park food all over the internet and Islands of Adventure was not spared. There was a special outrage edition about the Universal Orlando app and how the Mobile Ordering service works sometimes and other times leaves you more frustrated.

“Live performances. One-of-a-kind roller coasters. Tuxedoed penguins. I’m here because no theme park can give you what I do. And that’s also why I’m going to win.”

SeaWorld not only has the cutest sea animals within petting distance, but it also has the tallest, longest and fastest roller coaster in the Florida.

Whether you are a nature enthusiast, a family or an adrenaline junkie, SeaWorld will bring something for everyone to enjoy!

While the Orca Encounter has changed over the years, there are so many entertainment options for you to enjoy on your trip.

There are also so many places to escape the Florida heat in attractions such Antarctica: Empire of the Penguins.

See? There’s always something to do!

SeaWorld has long been accused of treating their animals improperly. The Shamu scandal alone has scaled down its business.

Apart from that, the usual pandemic-related issues prevail. A few of the rides have shut down or are used in an abbreviated manner.

The Results are in…What is the BEST theme park in Orlando?

Wow, that was *ahem* very enlightening. I never knew theme parks could be so sassy… or competitive.

We just met some awesome theme parks. Every one of them had something exciting and unique to offer. But here’s the thing: only one of them can win.

Here is our list of Orlando’s best theme parks:

What did you think of the winner? What would your list look like? Tell us in the comments below!

And thank you ThemeParkHipster for tuning in on The Bach…err… I mean our blog!

UP NEXT:  34 Incredible Things to Do in Orlando Other than Disney