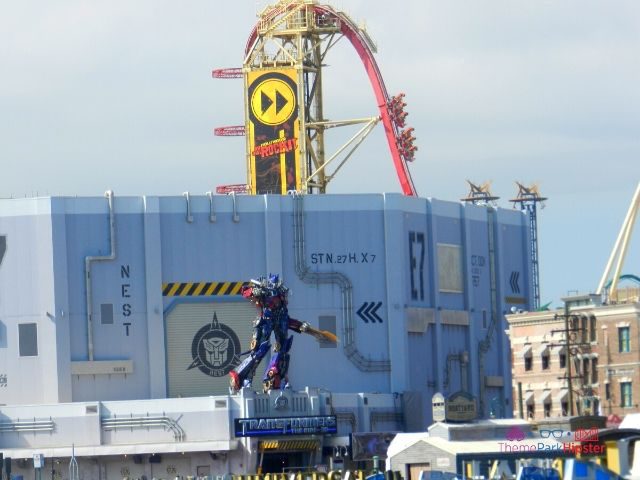 Have you ever dreamed of being IN a Michael Bay movie?

Like, does being dropped into the middle of an action film and fully immersed in surround sound-drama sound like a good way to spend your vacation?

If you said yes, I agree! And that’s why I recommend you take time to check out the Universal Studios Orlando Transformers Ride.

It’s one of my favorites and I know you’ll be glad that you took the time to check it out too, especially if you AREN’T into rollercoasters but still want an awesome adventure ride.

That’s right, on this ride you won’t be flipped around or go upside down, but that doesn’t mean you won’t feel thrill and excitement every single second!

So, believe it or not, this ride didn’t even premiere in any of the Universal Studios parks in the United States!

Universal Studios Singapore was actually the first park to debut the Transformers ride in December of 2011.

To do so they had to clear out two old attractions: Backdraft and the Special Effects Stages to finally open their version of the Transformers ride on May 24, 2012, after two years of construction.

After Transformers: The Ride had been open in Hollywood for not even a week, the Orlando park saw its popularity (by noting a 15% increase in park attendance) and started making moves to build their version of the ride.

In June 2012, just a month after Hollywood’s Transformers ride debut, Orlando started clearing out Soundstage 44 (previously land dedicated to Murder, She Wrote Mystery Theatre and Hercules and Xena: Wizards of the Screen) to begin construction.

Just one year later, in May of 2013 Orlando’s Transformers: The Ride 3D, began technical rehearsals and officially opened June 20, 2013.

If you were anywhere near Universal Studios during that day, you would have felt the excitement roaring in the air.

In true Universal style the grand opening show was spectacular.

Appearances from Steven Spielberg, Optimus Prime, and Bumblebee were just the icing on a cake layered with pyrotechnics, fighter jets, and fireworks!

The large crowd was captivated even with the suffocating humidity and never-ending Florida sun that would not go away.

The atmosphere was celebratory and we all were just happy to be a part of Universal Studio’s history.

And, believe it or not, the ride is scheduled to arrive in Universal Studios Beijing in the near future too!

So, if that doesn’t tell you this ride is a success, I don’t know what will!

Read: What to Pack for Universal Studios

As you enter the ride queue, you will be met with dim lighting and a sort of abandoned warehouse or military base feel.

Things might not feel too exciting yet, but just wait!

The closer you get to the ride the more Michael Bay, action-packed it feels.

The AllSpark has been located and you must help keep it out of the hands of the Decepticons.

You’ll find yourself in the middle of the N*E*S*T* (Nonbiological Extraterrestrial Species Treaty) base, as you are now N*E*S*T* recruits in this mission.

Right before you board the twelve-person vehicle that transports you through the ride, you’ll be directed to grab a pair of 3D glasses to become fully immersed in the story.

As soon as you board the twelve-person vehicle, you’ll begin to understand what all the hype for this ride is about as it strives to make you feel like you’re truly in the Transformers World.

Transformers: The Ride 3D is nearly 5 minutes in length, which is rather long for a theme park ride.

Read: How to Save Money at Universal Studios Florida?

How tall do you have to be to ride Transformers?

Riders must be at least 40″ tall (102cm) and not suffer from motion sickness or be overly sensitive to 3-D in order to fully enjoy the attraction.

Is Transformers the Ride scary?

The ride certainly isn’t scary, although young children might find it so due to the loud noises and swift, unexpected motion.

Where is the Transformers ride located?

You’ll find this ride in Orlando’s Universal Studios (not Islands of Adventure), and it’s situated behind the Shrek 4D ride.

To make it to Transformers: The Ride 3D, from the Studios park entrance, simply walk straight forward, go in between the Despicable Me and Shrek 4D ride, and you’ll find it up ahead on your right.

It seems that the longest wait time for this ride hits around 10a.m., so I recommend either hitting it right after park open or wait until after lunch time.

One of the most unique features of the Universal Studios Orlando Transformers Ride is that the vehicle is able to move 360 degrees.

Meaning, you’ll be moving forward on the track but also in all directions, making you feel truly immersed in the action.

Your vehicle is named Evac. It’s an Autobot designed to retrieve the AllSpark with your help.

The Evac vehicle sits 12 people (three rows of four) and has a lap bar for your safety.

This vehicle is attached to a platform that is guided along the 2,000 ft (610 m) track and stops at various screens and automated scenes along the way.

Because the vehicle is mounted to a platform as opposed to the track itself, you’re able to enjoy much more motion than in other previously designed 3D simulator rides.

You will also experience spinning in all directions and being thrust forward and backwards.

Plus, you will be loaded and unloaded from the right side of the vehicle, where an automated door opens and closes.

Time to Prove Your Allegiance to the Autobots

With Universal’s tagline of the ride being “The Greatest Battle You’ll Ever Ride,” you can be sure that this ride is one that will get your adrenaline pumping!

As you board your N*E*S*T* vehicle, you are being enlisted into a mission: keep Earth safe from Megatron and the Decepticons!

And the way this ride is designed, trust me when I say you’ll actually feel like you are flying alongside the Transformers in the battlefield!

The vehicle design of the attraction, or as Universal refers to it, the N*E*S*T* vehicle, is probably one of the coolest features of this ride.

If you’d like to get a POV preview of the ride before trying it out for yourself, you can do so here.

However, if you want to go in blind without watching first and experience it all for the first time in person, I totally get that too!

Creative Director Thierry Coup, who also designed Harry Potter and the Forbidden Journey, Shrek 4-D, and The Amazing Adventures of Spiderman, worked on this ride along with input from Michael Bay.

Meaning the director of the movie himself approves the authenticity of this ride.

This probably explains why in less than two years, three parks made room for it!

If you have any doubts at all whether or not it’s worth your time to ride this attraction, this article from LA Times says it all.

Stating that the ride “ranks among the top theme park attractions in the world” and is “one of Universal’s most sophisticated, satisfying rides.”

6 Tips for Making the Most of Your Ride Experience

Now that you know a little about this fun Universal Studios ride, let’s go through a few tips to make the most of your ride adventure.

1 – Use the Single Rider Line

One of my favorite features about this ride is that it has a single rider line!

So, if you’re park hopping solo, I definitely recommend taking advantage of this queue which moves at a much faster pace than the attraction’s main line.

Save $48 on Universal 4-Day Park-to-Park and get extra day! Visit both Universal Studios and Islands of Adventure on the same day.

2 – Stay Up-to-Date with the Wait Times

To get an accurate estimate of how long the wait time is on the day you plan to ride you can download the Universal Studios Orlando App.

You can set alerts on your phone that will tell you will the wait time has arrived at a time that’s best for you.

You can check it out here.

3 – Your Party May Split

Just keep in mind, if you do choose to use the single rider line with other people in your party, chances are you WILL be split up.

So, don’t wait in this line if there’s someone you want to experience it with.

4 – You Can Bring Your Bags on This Ride

Also, thanks to the design of the 12-passenger carrying vehicle you’ll ride in, equipped with high walls and a lap bar.

You won’t need to worry about where to put your bags or personal belongings. Simply keep them by your feet and you’re good to go!

5 – Use the Child Swap Program

If you are the parent to a child, do keep in mind that Universal offers the child swap room.

This is an awesome option for parents who have children who do not meet the height requirement or don’t feel fit to ride.

And keep in mind that when it comes to the Transformers ride, even though the height limit is 40″, the movie franchise is rated PG-13, so children under this rating might find the ride frightening due to the plot, loud noises, etc.

Save 54% or more on Tampa Bay’s 5 best attractions at CityPASS. Shop Now!

6 – Meet the Stars of the Movie

Additionally, if you’re a true Transformers fan, make sure to fit in time to do a meet-and-greet with one of the Transformers just behind the ride’s building, alongside the back of the Shrek 4-D ride.

The costumes the Transformers wear are INSANE and they can even converse with you through audio cues.

This is definitely a must for any Transformers fanatic.

Final Thoughts on Transformers the Ride

Overall, I love how immersive this ride is and the sensation that you’re really being dropped into the movie.

If you’re iffy about 3D and can’t overdo it with simulator rides, then I say choose THIS one to be your one 3D ride for the day!

Your adrenaline will be pumping as you truly feel as though you’ve been enlisted to save planet Earth from the Decepticons!

UP Next: How to Do Universal Studios in Just One Day?