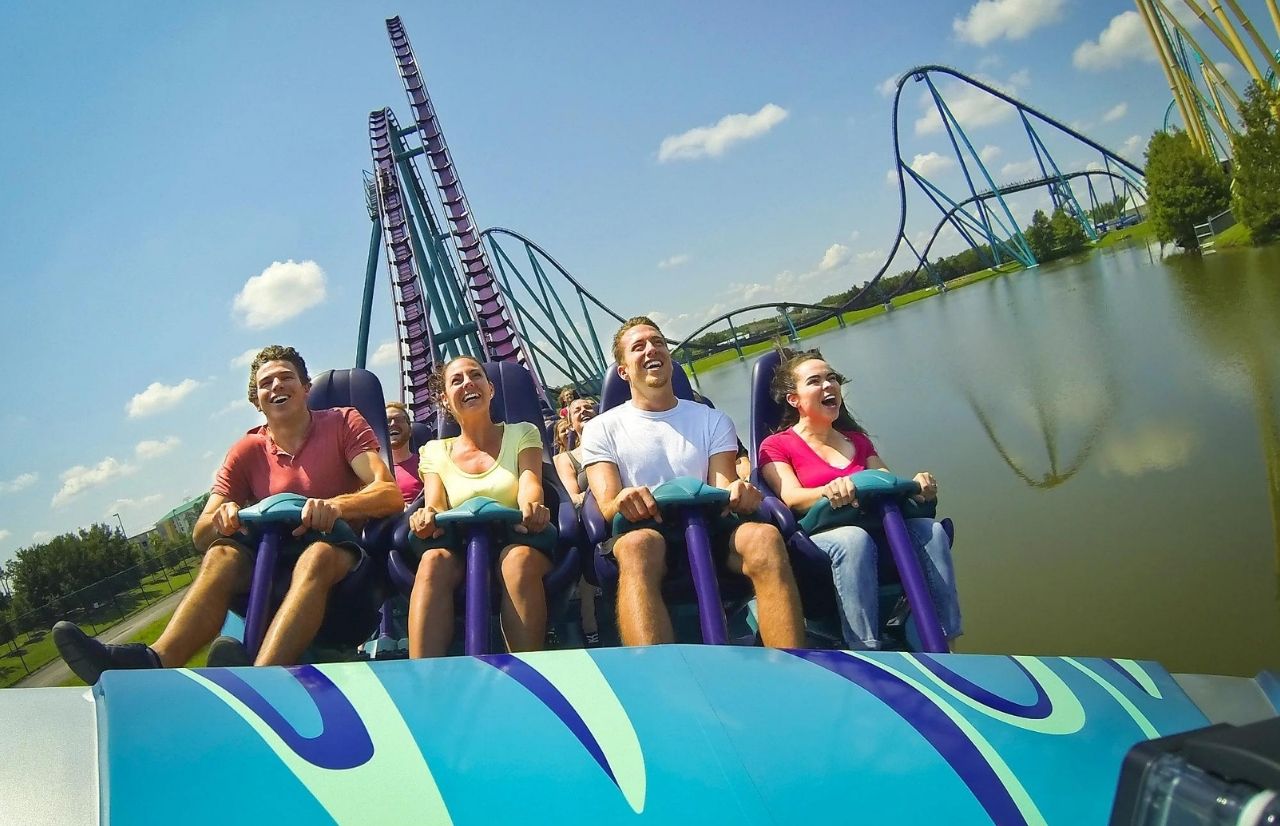 Are you ready to conquer one of the world’s top hypercoasters? Then the SeaWorld Orlando Mako experience is one that you have to do!

Here you’ll get to plunge through high thrills in order to know what it would feel like to be a Mako shark.

So, it shouldn’t come as a surprise to hear how much roller coaster enthusiasts love the twists, drops, and intense weightlessness of the ocean’s fastest shark.

Let’s go through everything that makes this Florida hypercoaster incredible!

Before we get started let me explain what a hypercoaster is for you. A hyper roller coaster is one that is 200-feet or taller and comes with high speeds, no inversions and specifically designed to create lots of air time.

Save up to 42% on SeaWorld Orlando Resort Tickets!

The announcement of SeaWorld’s newest roller coaster came about in April of 2015. During the reveal, SeaWorld promised a high-speed attraction that would be the longest, tallest, and fastest roller coaster in Orlando!

Up until Mako, Hollywood Rip Ride Rockit at Universal Studios had been the tallest roller coaster in Orlando topping off at 167-feet.

Four months later, pieces of the track would appear at the park and by March of 2016, the final piece of the roller coaster track would be placed.

The tracks of Mako were produced by Clermont Steel Fabricators in Batavia, Ohio.

With much anticipation built during the “Mako Rising” preview in the Nautilis Theater, Mako soft openings would officially start on June 2, 2016.

On June 10, 2016, Mako would open to the public and the “Summer of Mako” would be kicked off at both SeaWorld Orlando and Aquatica water park.

The Summer of Mako started in June of 2016 and would go on through August 7, 2016. During this time SeaWorld wanted this event to encourage families to explore, be inspired and take action to protect the ocean.

The activities included in this event were the Shark Touch Pool, Interactive Games, Mako Treats, Shamu’s Celebration, Block Party and an Evening of Coaster Thrills.

While waiting for Mako, be sure to explore the gorgeous shipwreck queue line which starts outside complete with Guy Harvey educational displays.

The outside queue is created with your typical conga lines that will usher you up a wooden pier to a covered area for your final boarding.

Please note that that there are multiple misting fans available throughout the queue to keep you cool.

Right before your train dispatches, something incredible happens. As you depart on your aquatic journey, you will see multiple shadows of sharks departing with you in a majestic-like migration!

Hipster Power Tip: The wait time for Mako is the lowest in the morning since it’s towards the back of the park. Try to head to the back area of SeaWorld Orlando to ride it first thing in the morning while the crowd level is low.

3. The Twisty Layout of Mako at SeaWorld Orlando

If you’re like me, then you’ll want to know what is ahead of you for this unique Florida roller coaster.

Mako is the tallest, fastest and longest roller coaster in Orlando. It’s 200-feet high, goes 73 mph and has a track that’s nearly a mile long.

It has 3 coaster trains with 7 cars per train that allows it to carry 28 riders. Each coaster train weighs 21,418 lbs. and since it is a hypercoaster, it has zero inversions.

There you have it. You have officially experienced Mako! You can watch the full Mako SeaWorld Orlando video here.

Recommended: I went to SeaWorld Orlando by myself AND you should too!

As mentioned earlier, Mako has three (3) trains with seven (7) cars for each train. This Bolliger & Mabillard coaster train allows for four (4) riders per row for a total of 28 riders per train.

This B & M ride has been a welcomed addition to SeaWorld Orlando and it’s one of the top hypercoasters in the world today!

The 13 Best Hypercoasters Around the World

Before you embark on this aquatic-inspired coaster, you should know a few little details about Mako.

How fast does Mako at SeaWorld go?

SeaWorld’s Mako stretches 4760 ft with a max speed of 73 mph. I don’t want to scare you with all the intense facts since Mako is still one of the smoothest roller coasters in Florida.

Get your Discounted (up to 42% off) SeaWorld Tickets with Groupon TODAY!

How tall do you have to be to ride Mako at SeaWorld?

6. The Great Mako vs. Kraken Battle

As with many roller coaster and SeaWorld Orlando enthusiasts, there are quite a few debates as to whether adding a hypercoaster is a good way to make this park competitive.

Personally, I feel like Mako is one of the BEST roller coasters in Orlando. Of course, following Hagrid’s Magical Creatures Motorbike Adventure and VelociCoaster!

Whether you’re a Mako hypercoaster fan or a Kraken floorless coaster diehard, I thought it would be great to give you a comparison chart of the two roller coasters.

In 2016, Mako was voted Best New Ride at the Golden Ticket Awards.

Although there are no inversions, I don’t feel like they are even needed for this hypercoaster.

It’s smooth with more airtime than you can handle in one coaster. If it’s anything like the now famous (or infamous) shark, the Mako, then we need to stay out of the water.

The lift of Mako pulls you up quickly to 200 feet in about 30 seconds. You then descend in an almost dive like manner pulling up with the negative g-forces.

Throughout the roller coaster you dive deep then ascend up like the shark hunting its prey. All I did was scream as I felt my body lift in and out of its seat at speeds maxing blank.

What a rush of speed and force!

One thing I want to point out that I really liked about Mako was the smoothness of the ride – that new coaster feel had me all giddy inside.

Can I say that it has replaced the Hagrid ride as my favorite attraction in central Florida?

Hagrid’s Magical Creatures Motorbike is my favorite ride in Orlando due to the themed-experience.

However, minus the themed-experience of the ride, and I’d say Mako is my favorite roller coaster in central Florida.

I personally like Mako and I believe that it is the perfect attraction for SeaWorld Orlando.

Before you make your way over to SeaWorld to conquer Mako, let’s go through some of the most common questions I’m asked.

It depends on your level of comfort with roller coasters. Mako is not scary to me, but if fast roller coasters and rides with lots of weightlessness bother you, then you’ll want to think twice before getting on the attraction.

How Many Gs Does Mako Have at SeaWorld Orlando?

This hypercoaster’s claim to fame focuses all the negative Gs that you will experience during your ride.

Does Mako at SeaWorld Orlando Go Upside Down?

There are no inversions on this roller coaster.

How Long is the Mako Ride at SeaWorld?

SeaWorld’s Mako is almost a mile long at 4760 ft and lasts about 2 minutes.

What can I expect at SeaWorld Orlando?

When approaching the park gates, you’ll see a watery entrance reminding you of a gorgeous bay in San Diego.

Once in the gates, you experience watery thrills, hear tropical noises, and see colorful topiary displays.

What are SeaWorld Orlando Hours?

What is SeaWorld address?

What are the Best Days to Go to SeaWorld?

Holiday peaks, crowd sizes, weather, and a few other factors have a lot to do with your SeaWorld Orlando experience, including how long you’ll be waiting in line for your favorite rides.

Having a hypercoaster is a welcomed ride to SeaWorld and the Orlando theme park environment.

The majestic onboard soundtrack, the stunning views, the picturesque colors, and the incredible speeds make Mako a top Orlando roller coaster to enjoy on your next vacation.

When you get to the top of the ride, embrace the suspense and take in all the fabulous views surrounding SeaWorld Orlando!

Have you ever rode SeaWorld’s Mako? If so, what was your favorite part of the ride? Let me know in the comments section below.

You can go ahead and read 11 SeaWorld Orlando First Timers Tips here or if you’re more of a podcast person, then you can listen to the tips here.

Book your next trip at SeaWorld Orlando’s Renaissance Hotel here!

UP NEXT: 10 BEST Budget-Friendly Hotels Near SeaWorld Orlando