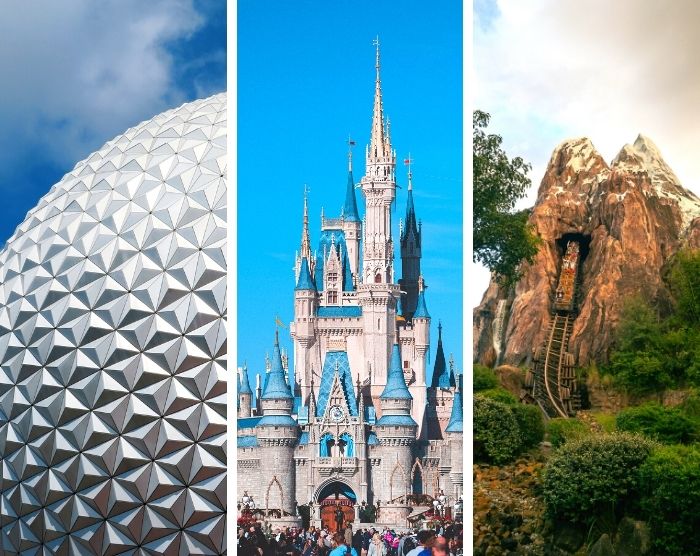 Have you ever thought about how big Disney World, the The Most Magical Place On Earth, really is? Whether you’ve been there before or not, you probably always thought the answer to this question was, “Pretty big…”

But the answers we give you today might really shock you!

At 25,000 acres, or 40 square miles, Disney World in Orlando, FL DEFINITELY holds its own, and if we could vacation there year round to experience everything all that land has to offer, we certainly would!

But since most people can’t, and since all that land is A LOT to fathom – we thought we’d make these BIG numbers into something a little bit easier to understand.

So, if you want to uncover some of the magic behind every square inch that is Walt Disney World, keep reading below!

What do we REALLY mean by “How Big is Disney World?”

If you’ve never been to Walt Disney World Resort in Orlando, FL and you start reading this…you might get a little scared…

But our answer is – don’t fret too much!

These numbers and examples for size reference below account for the size of the ENTIRETY of Walt Disney World resort, which includes: four theme parks, two water parks, parking lots for over 50,000 cars, storage lockers, Cast Member offices and training areas, an expansive wild animal savannah, an outdoor shopping mall, more than 200 restaurants, and 25 hotels and resorts.

So in short, NO, you ABSOLUTELY do not have to walk 25,000 acres to enjoy all that is Walt Disney World.

In fact, many of the areas are places that guests cannot even access, but it still is fun to think about how vast Walt Disney’s dream has grown!

Fun Facts about the Size of Disney World

Everyone loves a good fun fact…ESPECIALLY a good Disney World fun fact. Here are some of our favorites that help answer today’s big question: “How big is Disney World really?”

Disney World Used to be Bigger

Believe it or not, when Walt Disney World first opened in 1971, it was EVEN BIGGER than it is today! Although much of the land wasn’t built upon immediately, Disney had purchased 30,500 acres to create the world’s biggest theme park and resort on.

Part of the reason all this land was bought was the amazing price point!

Back then, when Florida’s land was seen as nothing more than useless swamp, Disney executives pounced on the discounted price of $80 per acre…an amazing deal when you consider that today that same land could sell for $80,000 an acre!

Of course filling in swamp land with dirt and concrete to make for a stable foundation ended up being costly, but considering that Walt Disney World has generated $2 billion over the years, I’m pretty sure they’ve justified the spending.

Over the years, the company has decided to sell back some land to the town of Celebration and other buyers, but it still sure is crazy to think that as big as it is now, the original plan was for it to be even bigger!

Where to Find the Exact Center of Disney World!

In Epcot, right outside of the Innoventions building, you’ll see a large inscribed gray circle amidst the otherwise red pavement.

Back when Epcot was originally built in the 1980s, this was meant to mark the exact center of the Walt Disney World Resort.

While things have changed and shifted around since then, it’s still an awesome fun fact that proves one important thing: Imagineers think of everything!

At a certain point, Disney World realized it became big enough to have its own zip code!  So the next time you’re wondering what zip code is the most magical place on Earth, it’s 32830.

It Takes a Small Army to Run

And whoever doesn’t live and work in Florida full-time to keep Disney World afloat is usually a member of the Disney College Program, which employs and houses about 8,000 students each semester in exchange for work experience and college credit.

2.5% of Disney’s Land is a Wildlife Reserve

Believe it or not, a considerable portion of Disney World’s land is not meant for people at all!  What exactly are we talking about?  Animal Kingdom’s 540 acre African-inspired savannah, of course!

That’s nearly DOUBLE the size of EPCOT itself, by the way!

So, as a side note, if you ever wondered if the animals in Disney’s Animal Kingdom were properly cared for, we’d give a resounding YES!

In fact, Disney’s vast and protected area is likely much safer than many natural habitats that are currently threatened by poachers and deforestation, unfortunately.

Disney World is as Big as…

Like we said before, 25,000 acres, or 40 square miles sound like big numbers for sure, but without some more context, you might not truly understand how big Walt Disney World is.

To help you with this, we’ve compared the size of Disney World in Orlando to some more familiar standards of comparison.

The entire CITY OF SAN FRANCISCO!

At 40 squares miles, Disney World is equivalent to the size of this historic city, which in reality has nearly 900,000 residents, 54 bus lines, 17 trolly routes, and three cable car lines.

That’s right, the greatest city in the world…the city that never sleeps…is only HALF the size of the Walt Disney World Resort in Orlando, FL.

Which would take more than 38,000 perfect throws for even Eli Manning to cover!

Well, not land-wise, but people-wise on a daily basis Disney World’s 4 main parks can hold up to 320,000 guests (pre-pandemic restrictions of course), which is about how many live in Corpus Christi, Texas.

Oh yeah – but keep in mind that still doesn’t account for employees, resort guests, water park attendees, and those in Disney Springs.

If one billion people stood shoulder to shoulder in Walt Disney World’s 40 square miles, there would be room for all of them…AND THEN SOME!

How Big is Disney World Compared to…

And finally, just in case you’re STILL not getting the magnitude of its size, here’s how big Walt Disney World is as compared to some of it’s competing theme parks.

Well…let’s just put it this way. Disney’s first ever theme park location, which includes TWO parks that are walking distance from one another – Disneyland and California Adventure – are smaller than Magic Kingdom’s parking lot alone.  (Which is 125 acres, by the way).

Not too different from its sister park SeaWorld Orlando, Busch Gardens in Tampa Bay stands at 335 acres, almost 1.5% as big as the Happiest Place on Earth.

SeaWorld Orlando, at just 200 acres, is less than 1% of the size of Disney World, Orlando. Hard to believe when you consider it’s home to so many animals, right?!

How big is Disney World in Orlando, Florida? BIG…REALLY big!  And if you didn’t already know, or figure it out, it’s the biggest theme park in the world – and it doesn’t look like any other amusement park is getting close to beating it any time soon!

And so, while every theme park has something AMAZING to offer, there’s one thing that Disney World will always have that others won’t – seemingly UNLIMITED possibilities of places to go, things to see, and stuff to do.

So in typical ThemeParkHipster fashion, sound off in the comments below!

Do you like how vast the Walt Disney World resort is? What areas are you yet to tackle? What part of Walt Disney World property do you think could be used differently or better?  We can’t wait to hear all about it!

UP NEXT: Very Best (and worst) Time to Visit Disney World