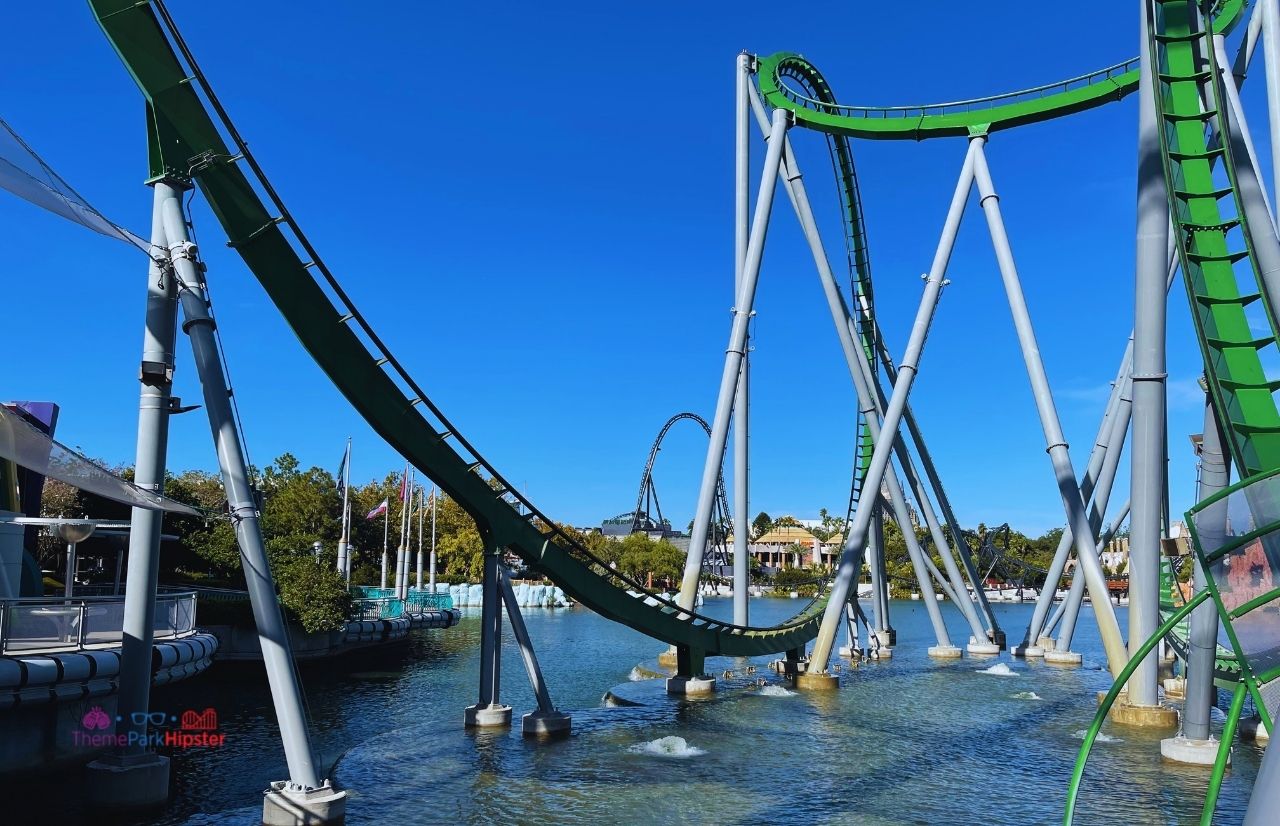 Who shares the good moments and not-so-good moments of her recent vacation to this Orlando resort.

I hope you enjoy Rebecca’s story!

Universal Orlando Trip Report: The Good and The Bad

Our trip was great! Smack in the middle of spring break season, but that’s when we could go.

Having never been to Universal Orlando Resort but always longing to go after they built The Wizarding World of Harry Potter.

Our first morning went great, I think most people were over in Islands of Adventure and a food kiosk Team Member told me that they opened Universal Studios early at the last minute, so Diagon Alley was pretty much empty.

It was so neat. I could have spent my whole 4 days in the Wizarding World. I ended up with two wands.

My fellow Ravenclaw, Luna’s wand, and while the Collector’s Edition wand was sold out online and in the parks, my Cabana Bay Beach Resort Universal Store still had them in stock!

The Team Members were so helpful as my wand magic wasn’t as natural and smooth as I hoped it would be.

Trying Butterbeer for the First Time

We also tried pumpkin juice, but hot butterbeer had my heart (we are from Minnesota and winter still won’t release us from her icy grasp).

But we liked frozen as well and I can totally see how refreshing that is in the Florida heat.

Discovering Springfield U.S.A. with the Simpsons

My son did lure me to the rest of lands. He loves the Simpsons so we ate there and got a  Flaming Moe and took a Big Pink Donut back to the hotel.

We went on all the water rides and since Popeye & Bluto’s Bilge-Rat Barges® was a walk-on, we fully enjoyed meeting the nice unsuspecting people in our rafts and watching their reactions when they got soaked.

Since the Universal Orlando Express Passes had sold out, we did use Single Rider Lines and that helped out quite a bit.

A Day of Relaxation at Universal Orlando Resort

We slept in one morning, had a pool day and went to the parks at night.

So on our next Early Park Admission day, Islands of Adventure was backed up onto the bridge all the way to CityWalk. It was a sea of people!

Hagrid’s Magical Creatures Motorbike Adventure was also backed up into the Lost Continent and was over a 120 minute wait. It regularly got up to 180 minutes while we were there.

We ended up riding Hagrid’s roller coaster on our last day at dinner time with a posted wait of 90 minutes (it was only about 70 minutes) AND it was way worth it!

However, I don’t think I’d ever want to wait that long again, but that was the best ride.

We had to sacrifice Flight of the Hippogriff. I promise I’ll ride it on my next trip. I don’t know why that was so busy when we were able to ride Forbidden Journey twice with 20 to 25 minute wait times.

That Hogwarts Castle queue was so amazing! I loved that the founders portraits talking to each other.

I think I had tempered my expectations due to all the media I consumed about the parks and how busy it was going to be.

Could we have done everything at Universal?

Probably, but we took it slow and enjoyed ourselves and picked our most important must-do things.

The Food at Universal Orlando Resort

My Toothsome Chocolate Emporium reservations were great. I really enjoyed my meals there and the milkshakes!

I was less impressed with our food at Cabana Bay Beach Resort. It was fine and my son was pleased with it, but one day the pancakes were pretty heavy and floury like they hadn’t been mixed well.

The chicken fingers were dry and they didn’t have normal dipping sauces, BBQ or Buffalo when I asked. I didn’t see any ranch but I didn’t ask.

The pizza was pretty good, so we got that several times. I much preferred the food in the parks and CityWalk to the Bayliner dinner.

The Cabana Bay Beach Resort was great though, thorough housekeeping service, the themeing and pools were amazing.

And shout out to the DJ/Song Curator at the pool because I know they were a diehard Taylor Swift fan like me.

We heard great pop songs, but I noticed many hits and some deep cuts from Taylor’s impressively large catalog.

I grew up a Disney girl but adding 3 days of Disney tickets would have cost $1000 which was about half our total Universal Orlando Resort vacation package that came out to $2300!

I have been reading some Disney horror stories so I hope things change over there. I loved the Magic Kingdom and Epcot and even back when Hollywood Studios was MGM Studios.

However, I’m way more interested in heading back to Universal when Epic Universe opens in the near future.

I’d love to stay a night or two at a Premiere Universal Orlando Resort Hotel to take advantage of the Express Passes that are included with your stay.

Thanks for reading my insanely long emails and take good care of yourself!

I’d like to send some love to Rebecca for sharing her detail experience when vacationing at Universal Orlando.

It was such a joy to read and hope her story gave you some insight on how you can plan your own EPIC Orlando vacation!

Now it’s your turn, what things surprised you the most about Rebecca’s Universal Orlando trip report? Let us know in the comments section below.

UP NEXT: Top 10 Ways to Find CHEAP Universal Orlando Tickets