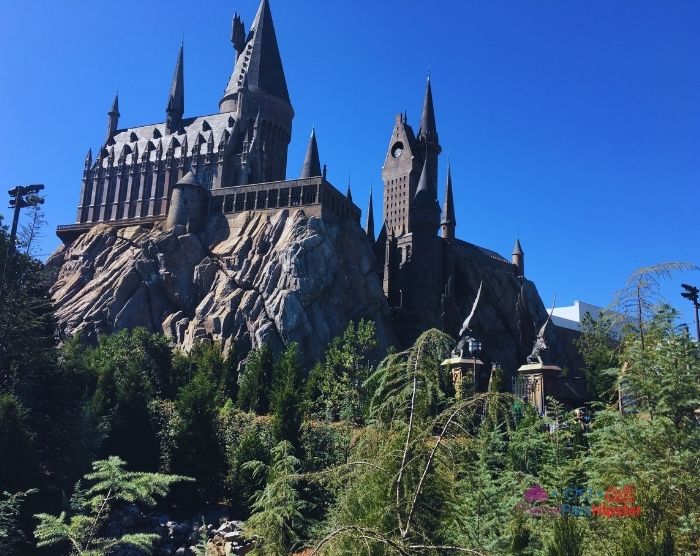 Ready to take an adventurous guide to The Wizarding World of Harry Potter?

Wizards call it home. Muggles call it the Islands of Adventure. And us Harry Potter fans? We just think of it as our own personal heaven.

The Wizarding World of Harry Potter at Universal Orlando Resort is one of the most popular and iconic theme parks of all time. With the films grossing over one billion dollars, the scrawny, green-eyed Chosen One has got many supporters in the Muggle world.

And if you are one of them good guys… WELCOME TO THE TEAM!

Here at ThemeParkHipster, we are totally obsessed with the ragtag bunch of teenagers that vanquished the Dark Lord. Personally, I can recite the movies to you as they play– word-for-word (well, if I’ve had A LOT of coffee I can).

So, it is a small wonder that I know the Wizarding World like the back of my hand. Luckily for you, I’m ready to spill the beans (magic or otherwise)!

What to Expect on This Harry Potter Inspired Guide

I’m going to give you a virtual tour of the Wizarding World of Harry Potter at both Universal Studios Florida and Islands of Adventure. I’m giving you the whole spiel– the rides, the entertainment, the food, and of course, the secrets.

Oh yes, much like our beloved Hogwarts, the Wizarding World harbors many secrets. And by the end of this virtual tour, you will know most of them (let’s leave some for the real visit, shall we?)

Our first stop is Diagon Alley– the place where Harry got his first glimpse of the Wizarding World. And yes, we are talking about the full recreation of Diagon Alley in Universal Studios, Orlando– straight out of the movies.

But first, a little refresher on how Diagon Alley differs from Hogsmeade from the books:

Both are wizarding settlements, both have shops selling magical goodies and both have insanely fun rides you could try out.

The difference between them, however, begins in the movies. Diagon Alley (in the books and movies) is basically a shopping mall/alley.

There are restaurants selling robes, books, ingredients to make potions, magical instruments, pets and of course, wands. There are bars and restaurants dotted around the shopping area, selling all kinds of liquor and food.

Diagon Alley basically is everything a wizard could want and anything a Muggle could dream of.

Oh, and it has a bank– to help you easily acquire more Galleons to spend!

Harry first went to Diagon Alley to pick up supplies for his first year at Hogwarts. Ever since it has been the site of many adventures (and misadventures) for him and his friends.

Hogsmeade on the other hand (and in the books and movies) is a village.

In fact, it is the only all-wizard village in Britain! Along with the iconic quaint Old English houses, it contains all the usual British village must-haves– coffee shops, cobbled streets, a good bar and a shady bar, the occasional snowfall and even a creepy haunted house!

Harry’s first visit to the village (which was illegal, of course) was the highlight of the Prisoner of Azkaban. I mean, Malfoy’s face when he got a face full of snow? It was (as Ron eloquently put it) ‘priceless’.

Hogsmeade has seen the emotional side of Harry Potter– his first date, first DA meeting, last time talking to Dumbledore…okay, I’m going to leave it at that or I’ll tear up.

Diagon Alley and Hogsmeade are clearly very important to Harry Potter. Important enough that Universal Orlando Resort decided to create two separate sections for each of them.

Diagon Alley is located in Universal Studios, Florida. Or rather at the back of the park.

It is full of buildings, shops and even a certain bus that will be totally familiar if you’ve seen the movies. But the best part about it is the entrance (or one of the three entrances actually).

Universal Studios recreated the brick wall behind the Leaky Cauldron that leads into Diagon Alley!!! Remember, it’s three up and two across. Off you go!

The Diagon Alley section of Harry Potter World only has one attraction that truly classifies as a ride. But boy, what a ride that is!

I’m talking about the famed Escape from Gringotts ride featuring fire-breathing dragons, talking goblins and an appearance by the infamous Deatheater– Bellatrix Lestrange and he who must not be named. Don’t tell me I didn’t warn you!

This is a ride you will not easily forget!

The Entertainment in Diagon Alley at Universal Studios

With numerous shows lined up, there is hardly a lack of entertainment in Diagon Alley. From the glamorous Celestina Warbeck to a puppet show telling the Tales of the Beedle and the Bard, there’s no way you will ever be bored.

If you have had your fill of shows, you can head to the only triple-decker purple bus you are ever going to see– the Knight Bus. Here you can talk to the friendly conductor and his best bud– a severed head!

On your visit to Diagon Alley, you will have the opportunity to go everywhere Harry Potter has been on his adventures. EVERYWHERE.

Look out for the classic Nimbuses and Firebolts! What’s the latest model anyways?

Luckily, you don’t just have to take his word for it, you can try Florean’s ice cream for yourself!

You can also sample some grub from the Leaky Cauldron or Gillywater from Eternelle’s Elixir of Refreshment. If you’re feeling a little more adventurous (and are not underage), scoot over to The Fountain of Fair Fortune or The Hopping Pot.

I hear they make a mean Wizard’s Brew.

Did you know that one of the entrances to Diagon Alley is near the famous Grimmauld Place?

Yes, you guessed it! That is Sirius Black’s family home and later, the headquarters of The Order of the Phoenix.

Look out for Kreacher– he is shy so he only peeks out of a certain second flood window.

Oh and don’t forget to visit the Ministry of Magic! You remember how to get there right? You just hop into the red telephone booth and dial MAGIC!

Recommended: 11 AMAZING Wizarding World of Harry Potter Hidden Secrets and Gems You Have to Know!

Now we come to the second part of Harry Potter World.

Just hop on the Hogwarts Express and choo-choo your way into Islands of Adventure! Let me give you a glimpse of what awaits:

The Hogsmeade section has many more rides than Diagon Alley which is more of a shopping area.

The rides here include:

Ever heard frogs singing? Well, naturally Hogsmeade has a choir of frogs! They are a student-led group at Hogwarts and go by the name– Hogwarts Frog Choir.

Don’t forget to watch out for the Triwizard Spirit Rally. Each of the three elite schools– Beauxbatons, Dumstrang and Hogwarts showcase their support for their champions through dance!

There’s a shop for everyone visiting Hogsmeade in this Wizarding World of Harry Potter Guide.

Hipster Power Tip: Don’t forget to pick up your own interactive wand at Ollivanders. If you’re lucky one of Ollivander’s assistants will pick you for the Wand Ceremony!

There is only one restaurant at Hogsmeade (it is a small village after all), And it is the Three Broomsticks.

With traditional British fare like Shepherd’s Pie, Fish and Chips, roasted potatoes and more, this restaurant is a treat to both the stomach and the eyes.

Remember to look up at the ceiling. You will see house-elves scurrying about, preparing your dinner.

I have two words for you– Hagrid’s monsters.

Oh yeah, not everything is as rosy as it seems in this quiet village. Especially not at Dervish and Banges.

You can find a cage of the Monster Book of Monsters here. Be careful, it bites!

Also, look out for the Fire Crab that Hagrid cross-bred to get the Blast-ended Skrewts. Their shell is beautifully bejeweled!

Now that you understand exactly what each of the two parts of the Wizarding World of Harry Potter has to offer, it’s time to start your journey!

Like Harry, you will end up in Kings Cross Station at Diagon Alley sooner or later. From here you can take a train to Hogsmeade Station where you can get off and explore Hogwarts. Or you can do it the other way– whatever flies your broom!

Whichever way you choose, you will get on the Hogwarts Express (only if you bought the two park ticket) in all its red and smoky glory!

All you have to do is find platform 9¾, grab your trolley and run towards the brick wall!

On the way, you will experience a classic Harry Potter adventure! You can ride the train from either way if you want to experience both adventures!

What to Know Before You Go to Harry Potter World

Now that you know what to look out for in this Wizarding World of Harry Potter guide, let’s go through a few of the questions I get asked about the most.

How much are tickets to Harry Potter World Orlando?

The entry fee for both parks for a child (aged between 3-10 years of age) is around $104 whereas, for an adult, it could cost $109 (prices are subject to change at anytime).

Can you do both Harry Potter parks in one day?

With a bit of luck and tons of planning, why not? However, you may spend a lot more time waiting in queues (unless you get the Express Pass) rather than exploring the shops and watching the shows.

Should I go to Diagon Alley or Hogsmeade first?

Hogsmeade should definitely be your first destination. Not only does it have more rides, but it also has the most popular rides. In order to beat the rush, you should get there as soon as possible and check it off your list!

However, if you want to do it the way Harry first did it, then you should start in Diagon Alley.

Which is better Diagon Alley or Hogsmeade?

The answer depends entirely on your preference! If you prefer sniffing around odd alleys, peering in old shops, window shopping and casting spells, you will love Diagon Alley.

But if you’re more into Hogwarts and being a Hogwarts student as opposed to a wizard, you will fall in love with Hogsmeade!

Is Ollivander’s in Diagon Alley or Hogsmeade?

Trick question! Ollivanders is now in both Diagon Alley and in Hogsmeade! So, if you couldn’t get your want in one place, you can always go to the other! You can also try your luck at being chosen for the Wand Ceremony twice!

Final Thoughts on The Wizarding World of Harry Potter

And there you have it!

A full guide to the Wizarding World of Harry Potter at Universal Studios! I hope this article was useful.

If you have any questions, please comment them below and I will answer you!