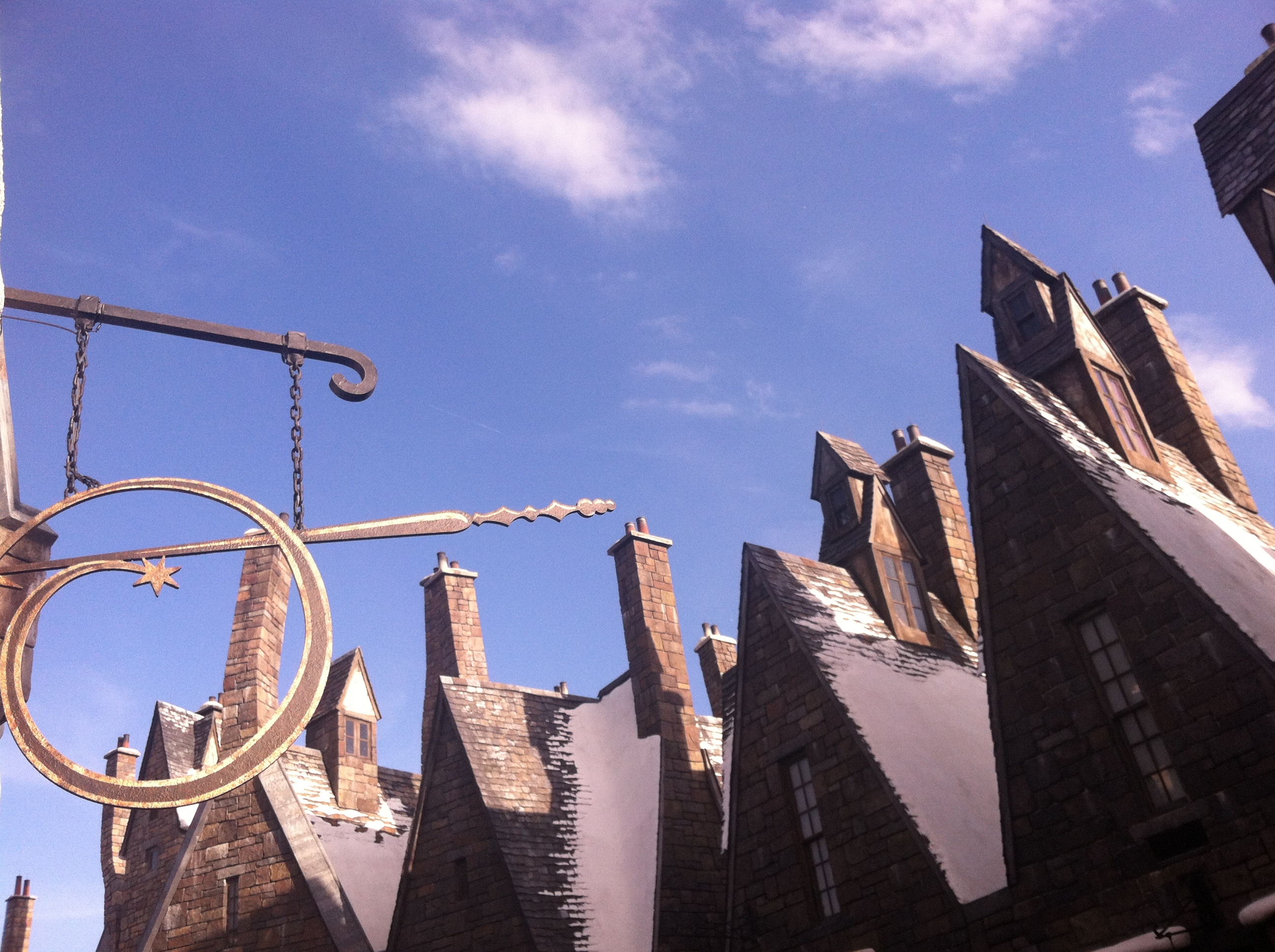 Are you ready to take a secret trip with me to Ollivanders at Universal Studios and Islands of Adventure?

I was browsing through The Daily Prophet while my kettle was pouring me a cuppa. And Merlin’s beard, would you believe what I found? Ollivanders in Hogsmeade!

Now, I knew that the Muggles actually pay to get into Diagon Alley in London (through the Portkey at Universal Studios, Florida), I also knew that Ollivanders was a huge success with the Muggles.

But a whole new branch in Hogsmeade (in Universal Studios) was something I would have never predicted!

So of course, I packed up my truck (well, it packet itself), and decided to investigate both the shops.

And you, my lucky wizard/witch, are coming with me!

It is of utmost importance that this piece of parchment does not fall into the hands of a Muggle. So please keep it off that thing they call the ‘Ethernet’, ‘interweb’ or whatever alright?

Alright, now grab some Floo Powder, and off to Ollivanders we go!

What to Expect at Ollivanders

Now it’s time for us to begin our magical adventure to Ollivanders wand shop at Universal and go over EVERYTHING you need to know for your visit.

The Way to Ollivanders Wand Shop

I wanted to travel the Muggle way this time, just out of curiosity. So I hopped on one of those funny car things to Universal Studios in Orlando, Florida.

Once I had entered, I went straight to Diagon Alley in the section the Muggles call “The Wizarding World of Harry Potter”. And sure enough, there stood Ollivanders– bold as brass in the morning sun.

All the dusty little wand cases were piled up in the windows, and there was even a wand floating above his signature purple cushion.

I couldn’t believe that the Muggles thought this wasn’t magic!

How to get to Ollivanders Wand Shop in Universal?

In order to get the shop in the Hogsmeade section, I took the only logical course– I went to King’s Cross Station in Universal Studios and took the train from Platform 9 and three quarters.

The Wand Selection Ceremony at Ollivanders

Once in Hogsmeade, I decided to view this Wand Selection Ceremony I heard a couple of Muggle boys talking about (don’t worry, you can view the wand selection in Diagon Alley too).

Turns out, it is quite hard to get an Ollivander wand these days due to so much demand.

One person (or sometimes two siblings) out of the entire crowd is chosen by Ollivander or his assistants to take part in the Wand Selection Ceremony at Universal Studios and Islands of Adventure.

This young wizard or witch will then be sized up by Ollivander and given many different wands to try.

Truly, this was a magical moment because at one point there were brilliant sparks everywhere before Ollivander snatched the wand away.

After a few tries, the wizard or witch receives a wand that chooses him/her. Then, of course, they face the choice of buying the wand or not.

With the popularity of some of Mr. Potter’s books, many young wizards would now prefer to buy replicas of his wand instead.

The show almost made me forget that Ollivanders is actually a shop!

Here you can find wands that are replicas of those used by Harry Potter, Ron Weasley, Hermione Granger, Albus Dumbledore, Luna Lovegood, Sirius Black and even (don’t tell anyone I said this) the Dark Lord Voldermort.

However, you can always look for your own special wand. You can ask Ollivander’s assistants for help if you can’t make up your mind.

But remember– the wand always chooses the wizard.

So, if you are getting a nice and warm feeling from a wand, that one just chose you!

Spell-casting in The Wizarding World of Harry Potter

Of course, a wand is of no use if you can’t cast some spells with it, eh?

A lot of first-years at Hogwarts want to try out a few spells in Hogsmeade and Diagon Alley so there are specific places designed for safe and easy spells.

The best way to look for them is on the map that you get with your wand! You can find it in your wand box.

A little tip I can give you here is that there are some really cool (and safe) Dark spells you can try out in Knockturn Alley. Just remember to look at them under what Muggles call black light (which is a form of magic of course).

What to Know Before Your Trip

Now that we’ve taken our Wizardly tour through Ollivanders, let’s go through a few frequently asked questions for your Muggle visit.

What is Ollivanders at Universal Studios?

Ollivanders is a wand shop at Universal Studios. It is part of the Harry Potter folklore and contains many elements from the books and the films.

There is a wand ceremony every 15-25 minutes where a wizard is chosen from the crowd, who is then chosen by a wand.

What happens when you get picked at Ollivanders?

Once chosen, you will step to the front where either Ollivander or his assistants will size you up and offer you different wands to try. All you have to do is wave the wands and wait for one to choose you!

Once your wand has chosen you, you have the choice to buy your own customized wand, another one or just not buy it at all.

How much is a wand at Ollivanders?

About ten galleons in wizard money which would translate to $25-$55. The small ‘learners’ wand costs about $25, while the others cost more. The interactive wands are the priciest, usually going for $55.

Are there two Ollivanders at Universal Studios?

Yes, many Muggles and wizards alike are getting confused by this. In the Muggle world, both of Ollivanders shops are located in Universal Orlando Resort.

One is in Hogsmeade (in the Islands of Adventure), while the other one is in Diagon Alley (in the Wizarding World of Harry Potter).

Do you get a free wand at Ollivanders?

Unfortunately, the answer to that is no. Ollivander is a very shrewd businessman and he makes no exceptions (not even for wizards).

Can you reuse your wand at Universal Studios?

Yes! The good thing about wands? They never expire! You can come to Universal Studios a decade later and still use the same wand.

Read how to find your perfect vacation home rental in Orlando by Clicking HERE!

For this section, I went ahead and sent an owl to Mr. Potter who very kindly answered all your questions about Ollivander at Universal Studios, himself.

1. Where are the hidden wand spells at the Wizarding World of Harry Potter?

These are actually much easier to perform than the usual ones (if you know where to look). All you need to do if hold your wand up straight (just like McGonnagal taught you!) and move it around in a triangle and/or circle.

Here are the two places you can find these hidden spells at, shhh don’t tell anyone:

2. What is the effect of the recent pandemic on the magical community?

Blimey! This is a tough one– so much has happened. But I’ll tell you what happened at Ollivanders.

The restricted amount of people (one party per presentation) has been removed.

This was probably one of the better experiences when it was restricted because if you were a solo traveler, then you would have had the whole presentation to yourself.

3. Which wand shop is better?

Call me biased, but Ollivanders at Diagon Alley wins this round. I, myself, got chosen by my wand (11 and a half inches, made of holly with a phoenix feather core) in that very shop.

Not only was it the beginning of my journey as a wizard, but it also has a much larger selection of wands. It is bigger and usually has two or more shows running simultaneously.

Well, the Wizarding World is a free market ain’t it? Ollivander does not have a monopoly! (Hermione has been teaching me Muggle business terms).

If you walk a little further along Diagon Alley, you will find another wand shop– Wands by Gregorovitch (one of the few who possessed the Elder Wand before Grindlewald stole it).

It has all the wands that Ollivanders does.

Also, in Hogsmeade you can visit a quaint little wand cart that has all of your favorite Wizard’s wands without the wait of seeing Ollivander.

This is one of the tips that you really want to pay attention to since you’re mostly like on this article because you want to know….

How to get picked in Ollivanders wand shop?

So, here is a secret– Ollivander only chooses wizards, especially young and happy ones. So bust out your Hogwarts uniforms (scarves, socks and all) and try to look as eager and excited as possible!

Now all you have to do it stand in the front of the crowd and try to make eye contact.

Hipster Power Tip: Don’t have a wand in your hands because then Ollivander would assume that you already have a want and don’t need another.

Let’s Wrap it Up…

I believe that concludes this investigation of Ollivanders in Universal Studios and Islands of Adventure. My findings suggest that it is an extremely magical experience, whether you are a wizard or a Muggle.

I would definitely recommend checking out both the shops and exploring Diagon Alley and Hogsmeade while you’re there.

And remember, there are expert spell-masters around to help you if you can’t get a spell right.

Alright, I am going to take your leave now. If you would hand me the Floo Powder, please.

Farewell, and do send me an owl if you visit old Ollivander!

UP NEXT: 7 Reasons You MUST Ride Hagrid’s Magical Creatures Motorbike Adventure