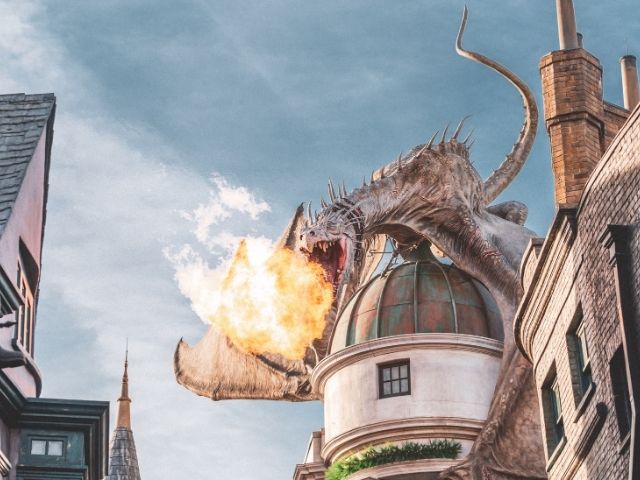 Ready to conquer ALL the Harry Potter rides on your trip to Universal Orlando?

The Wizarding World of Harry Potter is something of a legend on this blog. It is one of the most well-integrated lands in any theme park I have ever seen.

From the Beauxbatons dance to Ollivander’s shop to the looming Hogwarts castle, everything is straight out of the movies.

BUT, the true icing on the cake are the Harry Potter rides!

From riding a Hippogriff to escaping Dementors on the Hogwarts Express, your adrenalin will be pumping throughout the visit. The Wizarding World of Harry Potter rides are not for the weak-hearted– at least, not the rides we explore on this blog.

We are NOT here to talk about kiddy rides or the rides designed to keep the kids occupied while parents gulp down some Fire Whiskey.

Instead, we are going to talk about rides that have you screaming, gasping, laughing and awe-struck.

We’re a tribe of independent, solo ThemeParkHipsters! And we are on a mission to conquer the most daunting rides the Wizarding World of Harry Potter has to offer!

But before we can begin that mission, we need to do some scouting. Out of all the amazing rides and attractions at the Wizarding World, there are five that truly stand out.

These rides have the most immersive experiences, the highest thrill ratings and the best storylines.

And yes, it was extremely hard to pick them.

The Wizarding World of Harry Potter rides we are going to explore are ranked from pretty damn good to mind-blowingly great.

Especially if you are short on time, just visiting the rides in this list will leave you pleasantly tired and utterly satisfied.

So put on your invisibility clock because we are going scouting!

#5 Flight of the Hippogriff

Remember the scene where Harry saves Hagrid’s first class by getting on Buckbeak? My heart was in my mouth the whole time. And I could say the same about this ride!

It’s a regular train ride, except that you are zooming through Hagrid’s prized pumpkin patch! Make sure to listen carefully to all of Hagrid’s instructions. He gets very cross when you disturb the faeries living in the patch!

This ride is one of the more mellow rides but represents the huge part that Hippogriffs played in the Harry Potter movies (especially the Prisoner of Azkaban).The ride is designed so that you feel like you’re flying on the grounds of Hogwarts.

On one side, the castle towers over you while Hagrid encourages you from the safety of his hut.

And if you hear barking, don’t be scared. It’s just Fang, Hagrid’s pet Boarhound. He may look fearsome but he is a sweetheart– just like Hagrid.

Is there anything more iconic than the bright red Hogwarts Express choo-chooing its way out of Platform 9¾. The scenic journey, the billowing smoke and then, of course, the dementors who ruined it all.

Harry met his best friends Ron and Hermione on the train as well as his arch-nemesis Draco Malfoy. He bought his first magical chocolates there and first knew of Dumbledore there.

Universal Orlando has done its best to recreate this legendary train in Orlando– even going to the extent of creating two separate Wizarding Worlds the train can travel between!

You can hop on the train from Kings Cross station (in Diagon Alley) or Hogsmeade (in the Wizarding World of Harry Potter). Either journey will have a different storyline, so if you have the time, it’s worthwhile to check both of them out!

And before you ask, yes they do have the disappearing brick wall that leads to the platforms!

#3 Harry Potter and the Forbidden Journey

It’s time to talk about the most popular ride in the Wizarding World of Harry Potter– Harry Potter and the Forbidden Journey! Or as most people know it, the ride inside the castle that has the longest queue the world has seen.

This begs the question– is this ride worth the wait?

Harry Potter and the Forbidden Journey is one of the most exciting rides on this list because it actually takes you inside the castle. You get to see iconic rooms like Dumbledore’s office, the Gryffindor common room and the Room of Requirement.

Besides, this ride ranks pretty high on the thrill scale. It takes you on a dark, action-packed adventure through the castle AND on top of it.

You are chased by a Hungarian Horntail dragon (that Hagrid brought home…and then promptly lost) while Harry and Ron try to help you! Talk about a hair-raising storyline!

So, to answer my earlier question– YES, the ride is absolutely worth the wait!

#2 Harry Potter and the Escape from Gringotts

Talking about awesome storylines, how cool was Hermione as Bellatrix Lestrange in the movie?! (in case you don’t remember, Hermione disguised herself as Bellatrix to get into the Lestrange’s vault in Gringotts and steal Voldemort’s Horcrux)

Luckily for you, you get to see the action AND experience the improved version of the scene first-hand!

On this ride, you are fleeing from the Dark Lord himself, his loyal consort Nagini and a furious Bellatrix! And yes, the Gringotts goblins are after you too!

But don’t worry, Harry, Hermione and Ron will be with you throughout the ride!

While it is classified as a roller coaster, for a regular ThemeParkHipster the drops and jolts won’t be as scary. Still, it is pretty thrilling for a family-friendly ride.

We have finally made it to the #1 ride (according to this seasoned ThemeParkHipster) of the Wizarding World of Harry Potter.

If you remember the three categories we scored the rides on were experience, thrill-level and storyline. Hagrid’s Magical Creature’s Motorbike Adventure puts big, fat green ticks on all these boxes!

Riders actually get to sit in replicas of the motorbike. And yes, you can choose to sit in the sidecar!

It all starts with a bunch of Cornish Pixies getting loose during Hagrid’s Care of Magical Creatures class.

In the resulting adventure to recover them, you race through the Forbidden Forest with Hagrid and Arthur Weasley, meeting the Wizarding World’s most dangerous creatures on the way.

Tips for the Wizarding World of Harry Potter

How many Harry Potter rides are there at Universal Orlando?

Can you do both Harry Potter parks in one day?

Yes definitely! There are only five major rides after all. But you have to be planned, prepared and wake up early. It’s better to hit the popular ones first and then explore the rest at leisure.

What type of ride is Harry Potter and the Forbidden Journey?

Harry Potter and the Forbidden Journey is a KUKA robocoaster with a slightly darker theme than the other Harry Potter rides. It is a virtual, visual feast and is actually also classified as a 3D movie!

However, be warned that there are some nasty twists, turns and drops that may cause dizziness.

While the ride begins harmlessly enough, there are some parts that can get a bit too exciting for some. The part where Hagrid’s broken wand propels all the motorcycles backwards is one of those parts.

And there you have it!

All the Wizarding World of Harry Potter rides ranked from pretty great to utterly mind-blowing.

Which one was YOUR favorite? Let us know in the comments section below.