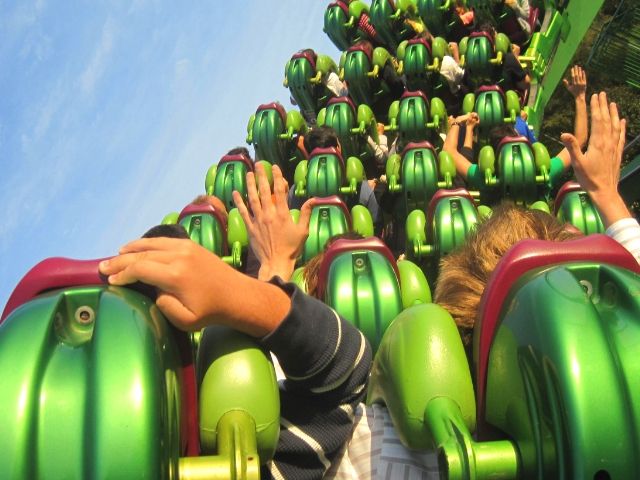 Are you looking for the BEST rides and attractions that you MUST experience at Universal Orlando Resort?

There’s nothing like a trip to Universal Orlando Resort (UOR). The sprawling theme park complex has two thrilling theme parks, almost a dozen hotels, a shopping and entertainment district, and a beautiful water park.

The best thing is, most of this is all within walking distance or a short bus ride away from each other!

After you’ve checked in to your hotel at Universal Orlando Resort it will be time to hit the two theme parks: Universal Studios Florida and Universal’s Islands of Adventure.

Both of the parks have must-do attractions, and I’ve narrowed down the list to eight rides that you cannot miss.

Let’s start with the first park, Universal Studios Florida. This theme park has many classic UOR attractions, many of which made our must-do list. It honestly just wouldn’t be a trip to Universal without seeing a mummy or riding a bike to an alien planet.

Coasters are one of the biggest draws to Universal Studios Florida, and right when guests walk into the park they will spot Hollywood Rip Ride Rockit.

This massive rollercoaster lets each rider pick a song to listen to from a curated list of music while they flip upside down over the streets of the park.

2. Revenge of the Mummy

Another fun rollercoaster not to be missed at Universal Studios Florida is Revenge of the Mummy. Luckily for you, this is located just past Hollywood Rip Ride Rockit, so you’ll be able to hop off one ride and go directly to the next!

This indoor coaster is a little scary, so if you have small kids you might want to consider a rider swap option.

The ride does not go upside down but does go backwards and has multiple fire elements and scary scenes that are sure to make you want to jump out of your seat.

3. Harry Potter and the Escape From Gringotts

A big reason many people head to Universal Orlando Resort for vacation is the Wizarding World of Harry Potter.

The land spans across both UOR parks, and has multiple attractions. One of rides not to miss is Escape From Gringotts. This story-coaster takes guests wizzing through the wizard bank as they attempt to defeat Voldemort and his gang.

Making it one of the best rides at Universal Orlando Resort.

There’s something about a ride and a game combo that we cannot get enough of, and we would ride Men in Black: Alien Attack over and over if time allowed.

Don’t forge to push the red button near the end of the ride for a bit of a point boost, too!

When fans of Universal Orlando Resort hear the word’s E.T. Adventure they automatically think of the iconic musty scent in the queue of this attraction and beg for the front row of the ride car so they can help bring E.T. home.

On this ride you’ll fly high over the city to bring E.T. back to his home planet that needs saving. Near the end of the attraction you might even hear a personalized goodbye message.

If you’re looking for the newest attractions at Universal then Islands of Adventure is the spot to be.

With a few new things opening in the past few years, along with an expansive Harry Potter area you could spend an entire day here and not do everything. But there are three rides you absolutely must do at Islands of Adventure.

1. The Amazing Adventures of Spider-Man

The beloved Marvel character, Spider-Man has his own attraction at Islands of Adventure. In fact, this is one of the most popular rides in the park with lines that can stretch past the indoor queue on super busy days.

The part motion simulator, part track-based ride takes you on a journey with Spider-Man as he swings into action to save the city from some of his most famous enemies.

This boat ride starts out calm and smooth but shortly after departing from the dock things don’t go as planned.

A few of the more dangerous dinosaurs get out of their cage and the entire place is put on alert. The attraction ends with a big splash down that will get everyone in the boat wet before getting back to the dock to likely get in line again.

The best part of the ride is not the actual coaster (which is great!) but the super unique ride vehicles that look like a motorcycle with a sidecar.

Each seat gives riders a completely different experience so be sure to try out both so you can determine which one is better. (We’re team bike!)

There are a few things that you need to know before going to Universal Orlando Resort to make your day a lot easier and a lot more fun!

We hope this guide of the best rides at Universal Orlando Resort helps you on your upcoming trip.

UP NEXT: Universal Studios Orlando Crowd Calendar: Know When to Go!