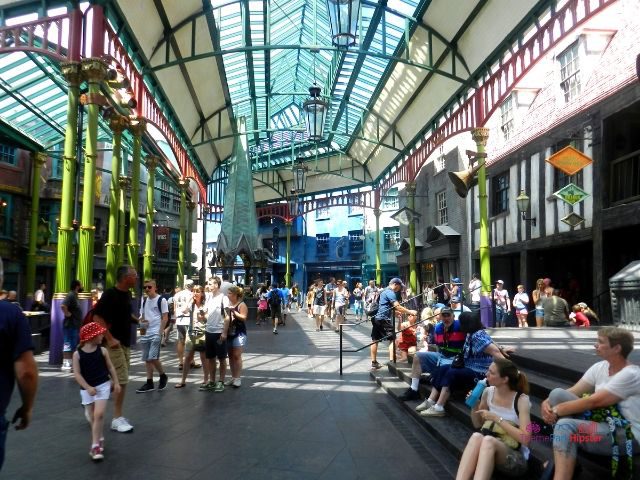 Last weeks Diagon Alley grand opening day celebration has long past, but I can’t help laughing with childlike giddiness as I replay that wonderful day over and over in my mind.

I was even quoted by the Tampa Bay Times regarding my first reaction to Escape from Gringotts.

With so many articles out there giving you all a “how to guide” or “top tips” (myself included), I’ve decided to do something new to showcase my indescribable trip through the brick walls of London.

I finally got it using my interactive wand!

For the brave and hungry.

She is joined with her Banshees to perform their greatest hits.

…and I know just where to find them!

A delicious wizard meal of Bangers and Mash at the Leaky Cauldron.

He looks ready to fry us with his fire!

Created by the Weasleys because no one else can do it better!

The best touring bus to the rescue!

A safe place for the little witches and wizards.

Shopping here will put a smile on her face .

Learn all the secrets that are hidden within it.

You know the wand truly did choose the wizard!

A starter kit for the below average student 🙂

Ready to lure you into Knockturn Alley!

T – Tale of the Three Brothers

Because, you know it’s a household must!

For all of your escape needs in the Wizarding World!

…and where will it take you?

Gringotts Wait Time and the Conspiracy to Steal Wizard Days

You’ll be singing this top wizarding jingle as you make your way through Diagon Alley.

This most EPIC celebration for the most amazing place in Orlando!

Harry Potter World in Orlando (and yes I did use that term…this is a Muggles’ guide ), is divided into two sections as mentioned earlier.

As you can, Diagon Alley Grand Opening day was absolutely fantastic!

There’s really no set guideline to preparing for a grand opening for anything related to the Harry Potter series.

However, there are ways of enjoying yourself no matter what the situation may bring.

Be sure to check out OutdoorsyDiva for her splendid post on her Potter-filled experience too.

If you enjoyed this Universal Studios Itinerary Guide, then you’ll love these:

Read the Universal Orlando Vacation Planning Guide for your next dream trip!

3 thoughts on “Diagon Alley Grand Opening Day From A to Z!”