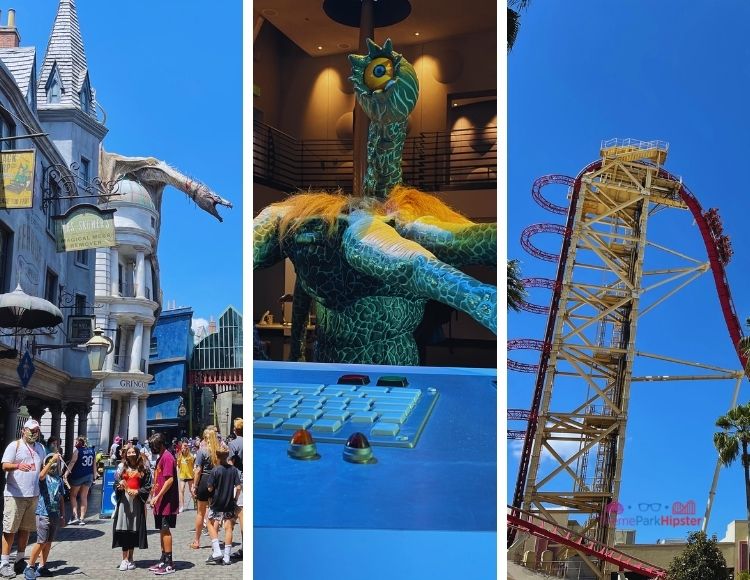 Lights, camera, roller coasters? Yep! That’s what you’ll get when enjoying some of the best rides at Universal Studios Florida.

As your trip approaches, you’ll be thinking about some of the top things that you can do at this Universal Orlando Resort theme park.

With a park known for its goal of immersing you deep into classic, box office phenoms, I thought it would be great to give you a list ranking the top five rides at Universal Studios.

If you’ve ever wanted to be in a Michael Bay movie, then here’s your chance! This ride is not a roller coaster so you won’t be flipped around or go upside down, but what you will do is enjoy a thrilling adventure with the Transformers on a unique ride vehicle special to the Universal parks.

What to Expect on Transformers the Ride 3D

As you approach the enormous show building at Universal Studios, you’ll notice a gigantic Optimus Prime stand picturesque in the Florida sun pointing in a peculiar direction.

You’ll then enter the queue that will make you feel as if you’ve discovered some top secret military base. A base also known as N*E*S*T* (Nonbiological Extraterrestrial Species Treaty).

The storyline of Transformers the Ride 3D focuses on having you retrieve The AllSpark at its special location in order to keep it away from the Decepticons.

You’ll experience this Universal Studios ride on a twelve-person vehicle with 60-foot screens complete with special effects such as blasts of air, simulated movement, fog, smoke and so much more! Making it one of the best rides at Universal Studios.

Transformers: The Ride 3D lasts for about 5 minutes. There is a Single Rider Line available and it has a height requirement of 40″ (102cm).

This is an interactive point-and-shoot laser ride with attraction vehicles similar to the ones on the Cat in the Hat ride at Islands of Adventure.

Similar in style as Buzz Lightyear Space Ranger Spin over at Disney’s Magic Kingdom, this fun attraction is based on the blockbuster Men in Black film franchise. The game style element makes this one of the best rides at Universal Studios.

What to Expect on Men In Black Alien Attack

As you approach the 1964 New York World’s Fair façade, you’ll first have to place your bag inside the adjacent lockers. These lockers are free for a certain a certain time period which is usually enough time for you to wait in the line and ride the attraction.

Once you enter into the exhibit displaying signs that states, The Universe & You – Are We Alone?, you’ll then know that you are officially entering a world unknown to everyday Earthlings.

You will now become an official “recruit” with an MiB agent taking you through one of the most creative queues that looks like you are actually entering the same building that Will Smith did in the films.

You’ll see classic 1960s propaganda film which is quite hilarious and you’ll also pass by the famous “Worms” who are taking a break as usual.

Once you get deeper into the queue, you’ll notice some odd looking aliens working diligently at their desks and empty MiB agent desks with little Easter Eggs hidden throughout.

Hipster Power Tip: Always check with a Universal Orlando Team Member before getting on the ride to see if you can do an Immigration Tour. It’s a special tour that allows you to see the aliens in the queue up-close and also learn some fun facts about the attraction while you’re there.

Once you hop on this family-friendly thrill ride, you’ll be sent out into the training room to put your skills to the test. You’ll first start out in a practice area where you’ll blast at cardboard aliens.

After your MiB training, you’ll get an official call from Zed letting you know that a group of aliens have just landed in New York City and now it’s time for you to take them out!

Keep in mind that this large show building (about 70,000 square feet) houses 127 animatronics that acts as targets that you must blast in order to reach the highest score.

Here’s a little something to know about me…

Men In Black Alien Attack Tips to Get the Highest Score

Please note that this ride does offer a Single Rider Line and the Height Requirement for Men in Black Alien attack is 42″ (106.7 cm)

This high speed steel coaster is one that many Universal Orlando fans debate over regarding if it’s a good ride. With the polling that I have done with other ThemeParkHipsters online, Hollywood Rip Ride Rockit has officially landed on this list of the best rides at Universal Studios.

What to Expect on Hollywood Rip Ride Rockit

As you approach this roller coaster towering at 167 feet, you’ll be able to choose the musical soundtrack for your twisted descent going 65 miles per hour.

One thing you should be aware of is that the boarding station has a continuous walkway similar to that of the Haunted Mansion at Walt Disney World.

Once you board your vehicle, you’ll have about 30 seconds to get into your seat, get strapped in, and select your song of chose for your ride.

Currently there are five music categories with thirty songs (6 in each category) that can be played during your ride.

There is a bonus song list on Hollywood Rip Ride Rockit that you can access if you know what to do. Luckily for you, I do!

There is a Single Rider Line on this roller coaster and the height requirement for Hollywood Rip Ride Rockit is at a Minimum Height of 51″ (129.5 cm).

#2 Harry Potter and the Escape From Gringotts

If you’re ready to go on the same wizarding adventure as Harry, Ron, and Hermione did in the last Potter film, then grab your wand and enter into the lavishly designed Gringotts Bank.

What to Expect on Harry Potter and the Escape From Gringotts

As you approached the slightly slanted building, you’ll notice a fire-breathing dragon perched atop of it ready to dive down for its prey.

Once you cautiously enter inside the bank, you’ll see goblin bankers deep into their work duties in one of the most elaborate set designs in any theme park. You’ll then be met with a few familiar faces from the Harry Potter franchise as you make your way through the bank’s security process.

After you have deceived the goblin bankers who think you’re going to your own vault, you’ll board a spectacular story-coaster that will have you screaming and laughing as you twist your way through the inner depths of Gringotts. making it one of the best rides at Universal Studios.

Along the way, you’ll try to defeat Lord Voldermort and Belatrix as they discover your plan and try to destroy you!

This  indoor steel roller coaster was designed by Universal Creative, but built by Intamin which makes the partnership between the two companies quite magical. They have also collaborated on Hagrid’s Magical Creatures Motorbike Adventure and VelociCoaster.

There is a Single Rider Line for this ride with a Height Requirement for 42” (107 cm) and you will have to place your bag in the nearby lockers before entering the queue.

Hipster Power Tip: Be sure to listen to the famous goblin Bogrod while waiting in line and look for little details throughout the queue such as newspapers of the infamous Daily Propet.

#1 Revenge of the Mummy: The Ride

We have now made it to my number one ride at Universal Studios and a top ride for many fans of the park, Revenge of the Mummy which opened on May 21, 2004.

This indoor dark ride roller coaster is absolutely fantastic with a detailed queue to help with the storyline of the attraction along with many props displayed, making you feel as if you’re on the real set of the Mummy film.

What to Expect on Revenge of the Mummy

You’ll approach an outdoor façade with the title Museum of Antiquities written across the top of the building.

Once you place your things in the adjacent lockers, you’ll see film props and designs from the movie along with videos showing behind-the-scenes footage on how everything was created.

As the plot thickens, you learn about the mysterious accidents that have been occurring to the crew members of the movie.

The queue gets darker and creepier the deeper you descend which may make it a bit terrifying for little kids. Besides the creep factor, it’s a pretty detailed queue with little gems hidden throughout it, such as nods to the former attraction that used to be there, KONGfrontation.

“The Curse is Real!”

Once you board the mine carts, you’ll encounter Imhotep’s tomb and the unlucky crew member, Reggie, warns you about coming there with the famous line:

“Are you insane?! Get out of here! The curse is real; this whole place is a trap! He’s after your souls!”

After that, get ready for a few surprises along the way (don’t want to ruin the ride for you) as you twist and turn going 45 miles per hour in the dark on one of the best rides at Universal Studios in Orlando, Florida.

The wait time for my favorite ride is always pretty decent. It rarely goes beyond 30 minutes, unless it’s a super crowded day. It does offer a Single Rider Line and has a Height Requirement for 48″ (122 cm).

Hipster Power Tip: The queue for this attraction has wonderful interactive effects. If the wait time is low, then skip the Single Rider Line and go through the regular queue.

Final Thoughts on the Best Rides at Universal Studios

Now you know what the best things to do at Universal Studios Orlando are for your trip. This park has something to offer everyone with any type of vacation goal.

Whether you’re going solo, have a big family reunion, or enjoying a romantic day, you’ll never run out of things to discover.

What’s your favorite ride at Universal Studios in Orlando, Florida? Let us know in the comments section below.