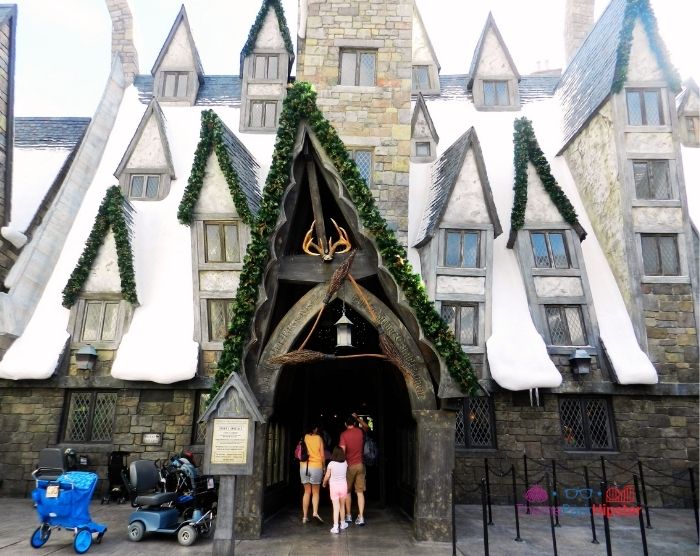 Today, dear ThemeParkHipster, we are visiting Hogsmeade– the only wizarding settlement in Britain without any pesky muggles.

So, chug some Fire Whisky, let sparks shoot out of your wand and flaunt your new robes! In Hogsmeade (even if it is in Universal Studios Orlando), there’s no need to hide.

And when you’re tired from all the gallivanting and want a hot meal, head over to The Three Broomsticks. Madam Rosmerta will fix you right up!

What is The Three Broomsticks, you ask?!

Well, it’s only the best place in Hogsmeade to get some grub! I can’t believe you haven’t been there before.

Come on, let me show you around!

What is the Three Broomsticks in Harry Potter?

In Harry’s third year at Hogwarts, he learns of Hogsmeade– an entire village populated only by wizards. Unfortunately, because his pig-headed uncle Vernon just wouldn’t sign the school form that would allow Harry to go to Hogsmeade!

Although this may have something to do with Harry blowing up Vernon’s sister Marge into a giant balloon and then running away.

However, a muggle cannot stop the Chosen One from doing as he pleases. So Harry sneaks into Hogsmeade, drinks butterbeer at the Three Broomsticks, hangs out with Ron and Hermione, and even scares Malfoy out of his wits (a hilarious scene).

Over the next years of Harry’s school life, Hogsmeade and the Three Broomsticks became the stage of many iconic events.

For one, Harry overheard the teachers talking about how Sirius Black had (kind of) killed his parents in the Three Broomsticks. Oh, and he was also Harry’s godfather.

Later in the movies, Madam Rosmerta (owner of the Three Broomsticks) was put under the Imperious Curse by Malfoy when he was tasked with killing Dumbledore.

On the lighter end of things, Harry had his first date in Hogsmeade. He also began his illegal student group– Dumbledore’s Army there.

With all the good times and the bad, Hogsmeade and the Three Broomsticks became a vital part of the Harry Potter books and movies.

What to Expect at the Three Broomsticks in Universal Studios?

As the Three Broomsticks is an old British inn and pub, a lot of the food is standard British fare.

You can also pop over to the Hog’s Head pub right next door and order some exclusive Wizarding World beer (our favorite spot to hangout). You will also find ales, wines and spirits.

For the kids, they also sell juices and milk. But I would recommend the Pumpkin Fizz– it’s the most ‘wizard’ thing to drink.

This is what makes the Three Broomsticks at Universal Studios so special. The detail and artistry of the building is jaw-droppingly astounding.

Let’s start with the entryway– three broomsticks (pun definitely intended) are hung from the snow-covered roof to welcome you into the inn.

Upon entering the inn, you will see high, vaulted ceilings, rickety rafters and ginormous vintage chandeliers.

Any sign of modern appliances (air conditioning, fans, lights) have been cleverly hidden. You will feel like you just stepped into the past.

Things Not to Miss

Now for the magical elements. There a twisted staircase that leads nowhere. You can see shadows of busy house-elves scurrying away on the rafters. There’s a giant magic menu with moving pictures (just like the books!).

And then, there’s the staff themselves who are all dressed up in wizarding gear.

The Three Broomsticks doesn’t take any reservations except for breakfasts that are part of your Universal Orlando vacation packages.

So it’s usually a first-come, first-serve kind of thing. And there’s always a queue.

But don’t worry, it’s not a long one. And you can browse their physical menu while waiting.

By physical, I mean a life-size recreation of the menu that is separated from hungry queuers by thin glass. Very practical.

Once you have chosen your meal and moved up to the top of the queue, you can order. Collect your food at the next counter and look for an available table.

And here’s the BEST seating option– outside.

Yes, the Three Broomsticks has both indoor and outdoor seating. However, the outdoor area gives you a beautiful view of the Hogwarts Castle and the Isles of Adventure.

Is Three Broomsticks better than Leaky Cauldron at Universal Orlando?

For those who are confused, Universal Orlando Resort has two different Harry Potter-themed areas. One is Hogsmeade inside the Islands of Adventure theme park and the other is Diagon Alley inside the Universal Studios Florida theme park.

You can travel between both Hogsmeade and Diagon using the Hogwarts Express if you have a park-to-park theme park ticket for both Universal Studios and Islands of Adventure!

Leaky Cauldron is the dining option at Diagon Alley and the Three Broomsticks is the one in Hogsmeade.

Choosing one place to dine at is really hard. Both places have similar menus, serving times and seating options.

My advice is to pick the one that meant the most to you while you watched/read Harry Potter. Or eat at both (because that’s what real fans and indecisive folks like me do).

What do they serve at the Three Broomsticks?

All breakfast options average around $17.99 (prices are subject to change). But don’t let that scare you, they all come with many different elements like sausages, croissants and eggs (even the occasional scone).

The quantity and taste is also pretty freaking good.

Kids can have the same dishes (the smaller version) for just $12.99!

There’s no end of meal options at the Three Broomsticks! Just talking about the menu makes me hungry. Look for yourself:

You can also get sides of Garlic Herb Roasted Potatoes, baked potato, fries and Corn on the Cob for less than $3.99. If you’re feeling healthy, you can get a fruit cup or a salad!

The non-alcoholic drinks at the Three Broomsticks include:

For the grown-ups, here are the alcoholic beverages on the menu:

Let’s go through a few of the most commonly asked questions about this magical dining experience.

Where can I find the Three Broomsticks?

Enter Hogsmeade from the main entrance (near the island of the Lost Continent) and look around. You’ll see the Three Broomsticks beside Honeydukes, right across from the Owlery.

What days are the Three Broomsticks open?

How much does it cost to eat at the Three Broomsticks, Universal Studios, Orlando?

Was any scene shot in the Three Broomsticks at Universal Orlando?

No, but Universal’s version of the Three Broomsticks was the inspiration for designing the set. Everything down to the seating situation to the fireplace is the same as it was in the movies.

Do you need reservations for Three Broomsticks?

No, the Three Broomsticks works on a first-come, first-serve basis. However, you can reserve breakfast there as part of your Universal Studio vacation package.

So there you have it, fellow wizards! A full guide to the Three Broomsticks at Universal’s Wizarding World of Harry Potter!

We hope you enjoyed the tour. Make sure to get your pictures with the broomsticks, and don’t forget to buy Butterbeer (it’s cheaper inside the inn).