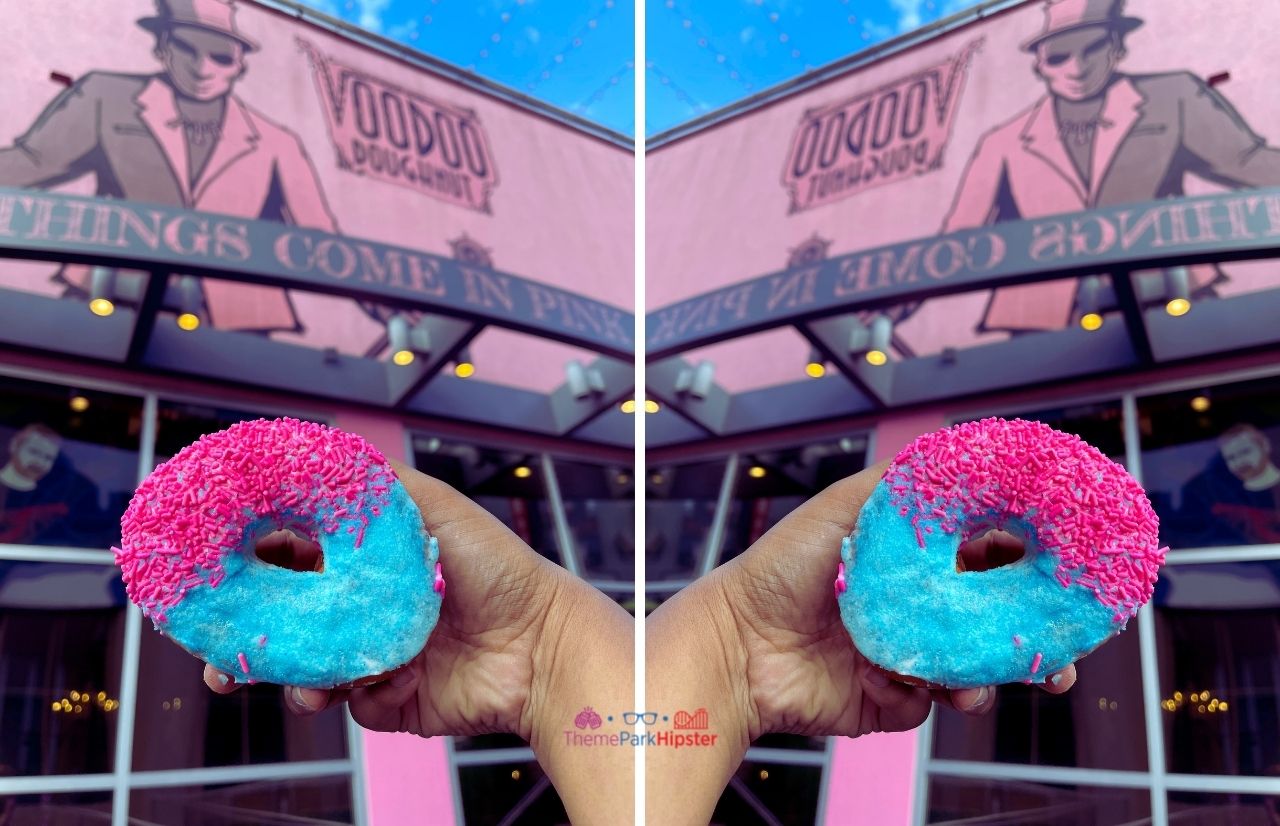 If you’ve never been to Voodoo Doughnut in Orlando, you’re doing it wrong!

Now, in all fairness, you’re probably thinking “another donut shop in Orlando – what’s the big deal?!”

Well, I’m here to tell you ThemeParkHipster, this counter-service bakeshop is more than just a simple tourist trap.

In fact, nothing is off limits when it comes to the beautiful and twisted minds behind Voodoo Doughnut… and that just may be what makes them so darn a-glaze-ing!

If you’re ready to learn more about some of the best doughnuts this side of town or care to level up your Universal Orlando CityWalk game… keep reading.

Because I’m going to unpack everything you need to know, when to go to avoid crazy long lines, and of course our suggestions on what to order.

Just don’t be surprised if you find yourself dreaming of sugar frosted eats and treats for the next few nights.

What is Voodoo Doughnut Orlando?

It’s filled with tons of unique doughnuts for you to try that are beyond creative!

What is so Special About Voodoo Doughnut?

What makes this sweet shop stand out from the rest is their ultra-creative bites, done-up in colorful, quirky inversions.

Here, you’re invited to pick your poison: Crunchberries or Cocoa Puffs? Bubblegum or Bacon? Each fried delight has their own special flavor to savor.

But what is the secret ingredient that keeps fans waiting around block just for a taste!? Imagination!

That’s right… if you like insta-worthy confections that think outside the box, then it’s time you check out the voodoo they do so well.

What is the Vibe of Voodoo Doughnut in Universal Orlando Resort?

In a word…. eclectic!

Voodoo Doughnut in CityWalk has cultivated a cult-like following due to their unique approach. Full of humor, gags, and gimmicks – Voodoo Doughnut Orlando is an attraction in of itself.

Energetic, frenetic, and oh-so-spunky, they put each and every menu item on a spinning conveyer-belt display for all to see… and drool with excitement.

Aesthetically speaking – this place feels like a colorful fun house turned on it’s side with tons of vibrant elements.

Elements such as a winding French Quarter-inspired staircase that leads to nowhere, antique chandeliers, and plenty of prop comedy filled with hoodoo hilarity.

What is on the Menu at Voodoo Doughnut Orlando?

This question could just as easily be “What is NOT on the menu at Voodoo Doughnut Orlando?!” With over 50 bewitching doughnuts on tap… variety is clearly the name of the game!

5 Best Voodoo Doughnuts on the Menu at Universal CityWalk:

You can get the full Voodoo Doughnut Orlando menu here.

How Long Will I Have to Wait to Get Inside of Voodoo Doughnut at Universal Orlando?

This sweet-tooth establishment has a pretty solid following. So, depending on the time of day, it can take roughly 30 to 40 minutes to get inside Voodoo Doughnut Orlando.

When Is The Best Time To Go To Voodoo Doughnut Orlando?

Looking to avoid long lines? I hear ya! You know we’re all about finding the shortcut, ThemeParkHipster!

If you can avoid it, steer clear of 8 a.m. – 11 a.m., as these are peak hours for business! However, this may assure you receive the freshest selection!

Hipster Power Tip: Use the Mobile Order service on your Universal Orlando App! It will save you so much time. You can order your doughnut ahead of time and walk right up to the Voodoo Doughnut mobile order kiosk, skipping the entire line!

Now that you know what to expect at this magical place, let’s go over a few the most commonly asked questions.

Do I Need a Reservation for Voodoo Doughnut in Orlando?

There is no reservation to enter Voodoo Doughnut Orlando. In fact, you couldn’t get one if you tried. This is a counter service bakery with no dine-in and no delivery options.

However, you can use the Mobile Order service to skip the long line and pick up your doughnuts when you’re ready.

That being said, you can take-out a Coffin of Doughnuts! That’s right, a three-foot hand-made wooden casket filled with three dozen delicious donuts!

Just keep in mind, you do not get to choose which donuts you get!

How Much Are Voodoo Doughnut at Universal Orlando?

You’ll be happy to know that the average cost of a doughnut at Voodoo Doughnut is $2.85. This is better than many of the local Orlando dessert spots that serve similar treats.

So be sure to use your Universal Orlando Annual Pass to take advantage of this deal!

How Long Do Voodoo Doughnuts Last?

All Voodoo Doughnuts are handmade and come in various shapes and sizes. According to official sources, doughnuts are made around the clock and never sit longer than 10 hours.

How Many Voodoo Doughnut Locations are there?

Voodoo Doughnut currently has 13 locations throughout America with two on the way:

When Did Voodoo Doughnut Orlando Open?

Last But Not Least (Voodoo Doughnuts vs Everglazed Donuts: Which is Better?)

So, you may be asking yourself if Voodoo Doughnut at Universal CityWalk is as good or better than Everglazed Donuts & Cold Brew at Disney Springs. Well, I’m here to tell you… it depends!

Ahhh! I promise, that’s not a cop-out answer! It really does depend on what you’re in the mood for.

Out of the two options, Everglazed Donuts are certainly more filling and a bit more predictable. However, Voodoo Doughnuts can be far too daring for some. So, if you’re looking a simple breakfast pastry… this ain’t it!

In the end, we are just happy that there is at least one tasty and creative doughnut offering at each of our favorite non-theme park gates!

Are Voodoo Doughnuts Worth It?

The airy, fluffiness of the doughnuts alone should convince you to make a special trip to this place on your visit to Universal Orlando Resort.

And there you have it, ThemeParkHipster. As you can see, we go nuts for doughnuts!  I hope this guide helps you narrow down the places you want to try when visiting Universal CityWalk.

I give Voodoo Doughnut a 8.75 out of 10 on the ThemeParkHipster dining scale and I know you will definitely enjoy it too!

Now, go and get you sugar coma on!

Ted Wioncek III is a professional Show Director, who specializes in developing highly themed experiences with immersive live entertainment. His work has garnered him a reputation as a “master in storytelling.”

UP NEXT: THE BIG PINK Simpsons Donut at Universal Studios– It’s bigger than your face!