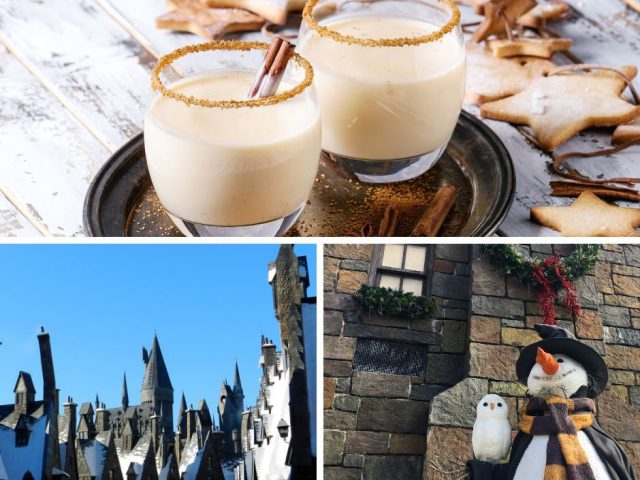 ‘Tis the season to get all lit up like a Christmas tree with the Cinnamon Toast Crunch Drink from the Wizarding World of Harry Potter Hogsmeade.

Imagine heading to Hogwarts on a picturesque morning with the intentions of grabbing a cold cup of butterbeer at the Hogshead to start your day.

The barmaid notices that you’re a lonely kind of muggle and offers you a delicious take on breakfast to make you magical journey just a bit better.

…but there’s something about the charming world of Harry Potter that makes this drink taste extra special and delightful to the soul.

Let’s Breakdown the Ingredients of the Cinnamon Toast Crunch Drink

There are only two main components of this magical drink: RumChata and Fireball Whiskey.

RumChata is bottled from a made-from scratch cream liqueur recipe that uses five times distilled Caribbean rum and a combination of cream, cinnamon, vanilla, sugar and other top-secret flavors.

Fireball Whisky is a cinnamon flavored whisky-based liqueur produced by the Sazerac Company. You can enjoy both RumChata and Fireball Whisky can be enjoyed in coffee, tea, straight up and in various dessert-based cocktails.

Now that we know what to expect from this delicious Wizarding drink, let’s go through how to make it.

How to Make a Potter-inspired Cinnamon Toast Crunch Drink

You can grab your delicious treat at the Hog’s Head which is located on the side of the Three Broomsticks Restaurant.

You’ll recognize the name of this bar from the Harry Potter books and is owned by Professor Dumbledore’s brother, Aberforth Dumbledore.

Before you immerse yourself into the Wizarding World of Harry Potter in Orlando, you should know a few basic things.

What is the Difference between Hogsmeade vs. Diagon Alley?

Does Universal Hollywood have Hogsmeade or Diagon Alley?

Can you walk though Hogwarts at Universal?

If you don’t want to ride this attraction, you can inform a Team Member that you would like to do a tour of the castle and they’ll lead you to the right path.

Hipster Power Tip: Be sure to take advantage of the Child Swap Program. This program works by allowing one member of your party to wait in a designated area along with any children who are unable or unwilling to participate.

Be sure to look up, look down, look everywhere!

I love finding new things to do and explore in the Wizarding World of Harry Potter. For first timers you may be overwhelmed with every incredible detail going on.

So, here are a few cool things to look for:

So while you’re out thinking of a cool and refreshing drink to have, be sure to ask for the Cinnamon Toast Crunch Drink at the Hogshead Bar inside the Wizarding World of Harry Potter Hogsmeade.

It’s perfect for the holiday season at Universal Orlando Resort.

Have you ever been to The Wizarding World of Harry Potter and had one of the drinks there? If so, let us know in the comments section below.