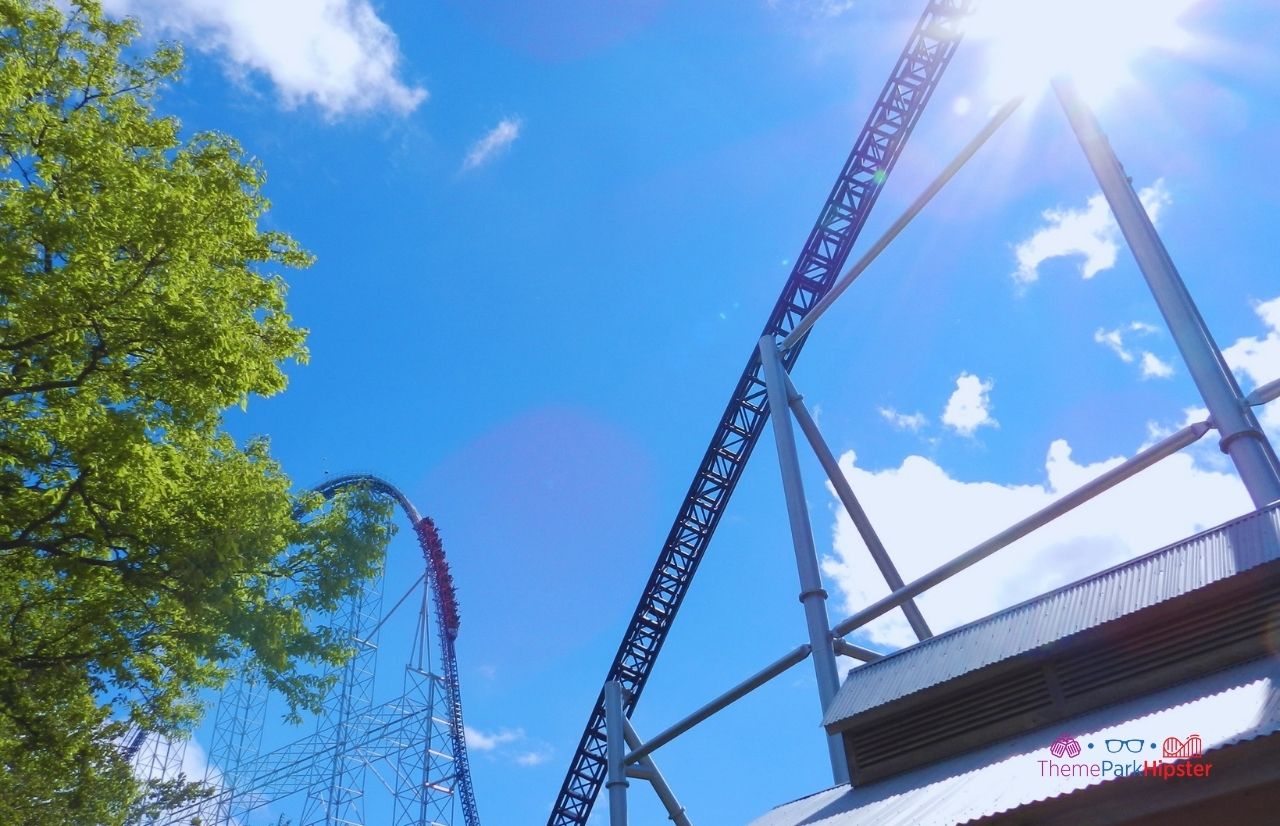 If you’re a roller coaster fanatic (like me), you must have heard the name Millennium Force several times till you finally decided to google it.

For a two-minute ride, this ride definitely has a certain oomph. It has since broken almost 20 records worldwide and also was the reason the term ‘Gigacoaster’ was coined.

Cedar Point definitely made its mark with this one.

I love me some adrenaline rush, but if you are someone who doesn’t here is a note of caution: the Millennium Force is a steel monstrosity over 300 feet tall. You will be rattling along the rails at a speed of approximately 93 miles per hour.

Now those of you who haven’t been fazed by those numbers, welcome! You are the inner squad that I will train to take on the Millennium Force without hesitating or faltering.

At the end of this article, your mission, should you choose to accept it, is to take a ride on the feared Millennium Force.

Let’s get started with your training, shall we?

History of the Millennium Force at Cedar Point

The Millennium Force is a staple part of the Cedar Point skyline. As I write this, it is going to be 20 years old. If you are quick at math, you will know that this steel monster was a 2000s baby. And by that I mean it ushered in the new millennium as well as a new age for Cedar Point.

Thus, it was named the Millennium Force (who could resist naming it that? Not me!).

From the moment it was opened to the public, Millennium Force set out to break as many records as possible. In this case, it was eight records. Along its lifetime, Millennium Force has broken almost fifteen records.

This roller coaster was more than worth the 25 million dollars Cedar Point spent on it. This was proven to us yet again when Millennium Force broke the record for ‘Most rides at an amusement park’.

Talk about getting the best bang for your buck!

Interestingly enough, the manufacturer of this roller coaster– Intamin, has had a very special history with Cedar Point.

You see, long ago when Intamin started out on their roller-coaster making journey, Cedar Point gave them their first-ever big job– Wilderness Run (it was called Jr Gemini back in the day).

No doubt Intamin thought they would return the favor tenfold with the Millennium Force.

Now that you young trainees know everything there is to know about the history of the ride, let’s kick off the ‘real’ aspect of your training with a simulation!

I’m about to tell you exactly how it feels to be riding on the Millennium Force.

After the unavoidable long queue, you are going to strap yourself in for the time of your life! The roller coaster doesn’t waste time trudging up a hill, instead, it begins with a boom.

You‘re going to be propelled up 310 feet in less than 20 seconds.

You won’t have the time to admire the stunning vista at the top, though. Mainly because you have to get ready for the drop.

Oh yeah, the Millennium Force lets loose and holds NOTHING BACK!

If you think the fun stops when the drop ends, you couldn’t be more wrong. The Millennium force proceeds to take you through enough twists, turns, rolls, ups and downs to make a German pretzel jealous.

But remember it’s the little things that make the difference. On the Millennium Force, you wouldn’t be rushing through the same boring landscape. Oh no, there are tunnels and even a lagoon!

The roller coaster takes you down to “Millennium Island” where you do the famous 360-degree helix before returning to the serpentine track again.

Finally, you will go through one last drop which is strategically placed right next to the queue (to say ‘Look this could be you! Just hang on for 80 more minutes’).

You scream once (or twice, I don’t judge) for the crowd and slows down to a brake run.

When you get off, be sure to pat yourself on the back. You just conquered the terror of the 2000s (I’m not talking about pink shoes and blue eye-shadow).

Now that you know what to expect on the Millennium Force roller coaster at Cedar Point, let’s go through a few tips to make THE MOST of your visit.

If you’re sick of waiting in line to get to your favorite ride, this is the best gift you can ever give yourself. The app shows live queue timings. The app can be hit-or-miss.

Sometimes it works perfectly and sometimes it’s more of an annoyance.

Join the Conversation on the Solo Theme Park Traveler’s Community on Facebook!

2. Get to Cedar Point Early

Nothing can rain on your parade than spending more time waiting for the rides than actually riding them and having other sorts of fun. Be sure to get to Cedar Point on time so you can be the first one to ride.

3. Don’t Bring Your Entire Room in your Backpack

So many people get super-excited and end up packing many more things than they really use (not speaking out of personal experience or anything ahem). Pack light my friend!

4. Plan Out Your Day

Going to a theme park without a plan should be downright illegal. How else will you know what’s going on and how to get on the best rides? Come on!

I’m going to say this again– check the weather forecast before you go. And make sure it’s cloudy without any chance of rain (or meatballs). Going during the weekday is also ideal if you want to avoid the crowds.

It saves time, not to mention money because then you will know where the cheap places are. Also, you will know exactly where to get food in each section of the park. Especially if you find something that you really want to try.

7. Drink water, and then drink some more….

The summer sun does not do ThemeParkHipsters any favors. So, don’t get dehydrated and cranky. Drink up! But water only (or mostly) because alcohol and coffee dehydrate you.

SKIP THE LINE: Get YOUR Cedar Point Ticket TODAY!

Souvenirs are not overrated and Cedar Point has some of the BEST ones for you to choose from. Especially at the gift shop near Top Thrill Dragster.

You will look at them years later and remember all your adventures. I, for one, believe with all my heart in investing in them.

What to Know Before You Go to Cedar Point

Now that we have the basics out-of-the-way, let’s go through a few of the most common questions.

How high is the Millennium Force at Cedar Point?

The Millennium Force stands at a whopping 310 feet tall. When it was first opened to the public, it actually broke the record for being the tallest complete circuit roller coaster, among many other things.

When did the Millennium Force open at Cedar Point?

The Millennium Force (as you can tell by the name) was opened on May 13, 2000– the dawn of the new millennium. This steel monster is actually a cute 2000s baby!

How many G’s are there in the Millennium Force?

The Millennium Force packs about 4.5 G. Now that is a force to be reckoned with!

How tall do you have to be to ride the Millennium Force?

As with many rides at Cedar Point, you have to be a minimum 48 inches to ride the Millennium Force roller coaster.

Can I wear flip-flops to Cedar Point?

I mean, you could (it’s a free world). But I would strongly advise you not to. You may not be able to get on all the rides you want to because some actually ban flip-flops! Additionally, sneakers provide much better comfort and protection from the sun.

Get deals up to 85% off for Sandusky, Ohio on Groupon TODAY!

And with that, you have successfully completed your training! You are no longer trainees, you are experts on the Millennium Force!

Now, if you remember, I had mentioned something about a mission. But don’t worry if you can’t recall that because it was about a page and a half ago. I can remind you:

Your mission, if you choose to accept it I know you will accept but I had to include that– free will and stuff, you know), is to take a ride on the feared Millennium Force!

You got it in you! I believe in you!

Now pick up those keys and drive to Cedar Point! But make sure you arrive before 11:00 a.m., or you won’t get one of those Access Passes to the Millennium Force.

UP NEXT: 7 Reasons Rougarou at Cedar Point is A MUST-DO Roller Coaster!