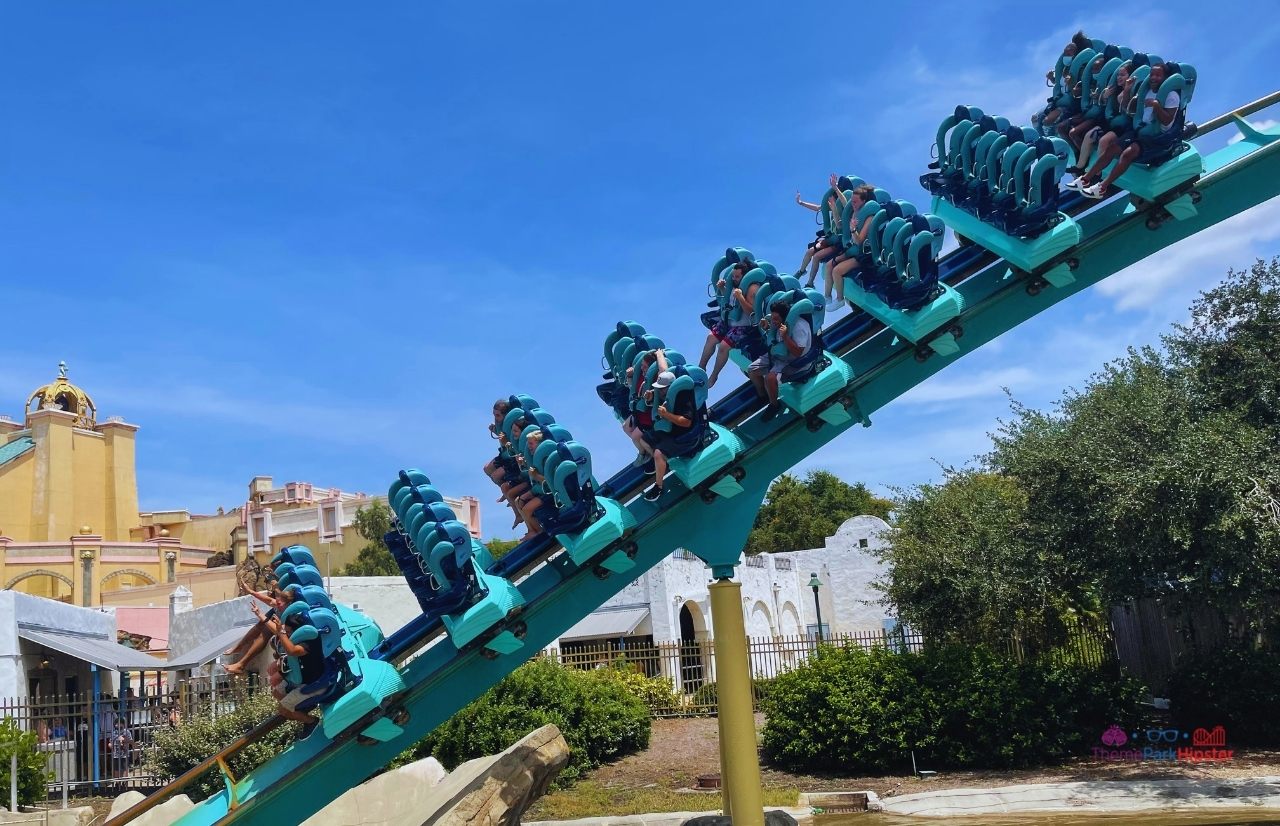 Are you ready to challenge the Kraken at SeaWorld Orlando?

I know as a theme park blogger, I should never play favorites. It’s like choosing between your children. It’s unfair and bad and I feel terrible about it.

But I cannot lie to you, the Kraken at SeaWorld Resort Orlando has definitely made its way to the top of my list for coasters in central Florida.

I cannot really tell you about it for you to see my point, you have to experience this ride, actually feel the adrenaline coursing through your veins for your own self.

What is the Kraken in SeaWorld Orlando?

Nevertheless, I promise that you will not regret getting on this ride.

But before you can hop on it, let’s get you prepared so you can take on the fearsome Kraken without as much as batting an eyelash!

History of the Kraken Ride at SeaWorld Orlando

The SeaWorld franchise started in 1964 in San Diego, California. It was founded by George Millay, Milt Shedd, Ken Norris and David DeMott.

The franchise was originally planned as an underwater restaurant, but eventually blossomed into an aquatic amusement park.

In 1968 SeaWorld became a publicly traded company, which allowed for expansion into the Ohio and central Florida areas.

Later in 1973 SeaWorld Orlando was officially established into the park brand that we know of today.

They had dolphins, sea lions, and soon they were in possession of two orcas. SeaWorld Orlando has since become one of the most popular tourist destinations on the East Coast of the United States.

‘But why stop at a kingdom, why not build an empire?’ the founders thought.

Then came a host of thrilling additions such as Wild Artic in 1995, a dolphin exhibit in 1996, and Journey to Atlantis into 1998 to the park that made it the one stop entertainment destination of Orlando.

When Was the Kraken Roller Coaster at SeaWorld Orlando Built?

The Kraken ride at SeaWorld was the first roller coaster added to the park on June 1, 2000.

It is named after the myth of the (obviously) Kraken. It was said to be a mysterious, powerful and vicious creature that lived in the depths of the sea. That alone should tell you everything you have to know about the roller coaster.

Its very name would cause sailors to have panic attacks deep in the waters of the Caribbean,

After being opened to the public in 2000 it has been terrorizing, I mean entertaining the guests of SeaWorld Resort Orlando ever since.

Read: 7 Reasons You Have to Love Manta at SeaWorld Orlando

If you survive waiting in the queue for forty-five minutes to an hour on peak days (check out the tips section on ways to skip the queue), you reach the train.

Word of warning for when you are first entering or exiting the queue, keep an eye out for eerie eggs that contain eels. Then make sure you are strapped in tightly because you are in for the ride of your life!

Once the steel gates in front of you open up, it’s showtime!

The Kraken is not like any ride you may have before. It is wily and it will try to trick you. For example, it will make you believe that the ride is starting straight away, but you realize that there is time before the drop.

How Tall is the Kraken at SeaWorld Orlando?

Your nerves pick up as you climb up more than 150-feet high and when you are at the top you look down and breathe a sigh of relief. The drop seems quite small and not so steep.

Well, you have fallen straight into the Kraken’s trap!

After the small drop comes an enormous 144 feet drop after which you will be turned upside down so many times, you won’t know which way is up. The ride has two vertical loops which will have you gasping for breath.

Among all the different loops, rolls and 7 inversions, my favorite remains the Zero-G Roll which as you can guess literally brought my heart into my mouth.

The bonus on this particular roller coaster is that you plunge deep into the kraken’s lair, and oh boy do you want to scramble out of there fast!

The Kraken also fools you twice (be sure to count) that you have reached the end of the ride when there is when there are scarier twists and turns to come your way.

This is no mean feat, considering the ride lasts for about two and a half minutes.

Read: 7 Reasons You Have to Ride SeaWorld Orlando Mako

Train Design of the Kraken

This beauty was designed by no other than the famous Bolliger and Mabillard– makers of the finest roller coaster ever since their company came into existence.

The 3 trains have eight cars, all of which consist only of a single row. Each row carries up to four passengers which can carry a total of 32 riders.

Given the popularity of the ride, hardly any of the seats are left empty especially during peak hours.

At the time of construction, The Kraken was Orlando’s only floorless roller coaster. That means your feet will be dangling out of the car and resting on nothing but 140 feet of air.

The entire ride is made of steel and has seven exhilarating inversions that will make your head swim. But Bolliger and Mabillard thought it was boring without all seven inversions being different from one another.

Did I mention that the seats are open-sided?

Well, now I have. That means exactly what you think it means! It will be like sitting in a car with no doors, except 150 feet up in the air.

Well, I hope that sure sounds fun and thrilling to you!

Is the Kraken at SeaWorld Orlando a Virtual Reality Ride?

Although SeaWorld Orlando briefly experimented this upgrade, the virtual reality portion of Kraken is no longer available.

Save up to 42% on SeaWorld Orlando Resort Tickets!

Now that you know what to expect on this massive roller coaster, let’s go through a few tips to make the most of your day at SeaWorld Orlando.

1. Try to talk to other people around you.

Theme parks are the best places to make happy memories and life-long friends. So instead of staring at your phone the entire 30 minutes that you are waiting in line, just say hi to the person next to you!

This is a great tip for solo theme park travelers.

2. Dress for the Adventure

Ladies dress comfortably and don’t wear a skirt or a dress. Seriously, you do not want to be suddenly embarrassed by having your unmentionables shown while having the time of your life on the many roller coasters at SeaWorld.

Read: What to Pack for a Day at a Theme Park

3. Always Pick the Best Seat for the Most Thrills

Do you like feeling weightless when you are on a roller coaster?

Because then, the back rows might just be for you.

The last row at the very end of the train is actually more intense and gets more air-time which quite literally means the time you hang in the air.

Try to leave anything that can fly away easily (sunglasses, caps, the damn scarf) in the locker area beside the ride.

Maybe consider putting your earrings in your bag too. And then leave the bag there. You can do this my renting a locker that you can use all day if you plan on traveling solo.

If you’re going with friends, then have someone in your group hold your things if that person is not into roller coasters.

5. Get to SeaWorld Early to Skip the Long Waits

In order to get into the front of the queue without doing all the waiting, you’ll need to get to the park early in the morning and visit all the most popular rides (one of which is the Kraken at SeaWorld Orlando).

The other way of course is to buy a Quick Queue pass which allows you to skip the top attractions at SeaWorld.

The decision really depends on how much of a morning person you are and if you really want to see and do all that the park has to offer.

Staying hydrated is one of my top tips. The Florida sun is sooooo hot and you don’t want to be having a heat stroke or any heat related illnesses while having fun do you?

You’ll also want to avoid having any adult beverages at this time too. In the evening that would be fine. Just remember that alcohol dehydrates your body, it does not pair well with the midday heat.

Listen: How to Beat the Florida Theme Park Heat

If you are going to spend the entire day at SeaWorld (which I highly recommend), do set aside a considerable budget for food.

The adrenaline is going to make you hungrier than you may have expected and as with all theme parks, the food is pricey.

On the other hand, you could also try SeaWorld’s All-Day Dining Plan which allows you to eat and drink all day as often as once every hour for one low price saving you quite a few bucks with it.

8. Visit During a Special Event

These are the most popular events so, keep an eye out for that or plan your trip accordingly.

Get your Discounted (up to 42% off) SeaWorld Tickets with Groupon TODAY!

Let’s Wrap This Up

Well my fellow solo ThemeParkHipster, you are all prepared to take on this mythical creature.

Remember to hold your head high and stick your chin out. You are one brave theme park traveler to trek all the way to Orlando on your own and face the Kraken at SeaWorld Orlando like it is nothing.

You should be so proud of yourself! I know that I am!

UP NEXT: 19 Best SeaWorld Orlando Tips to Save Time and Money