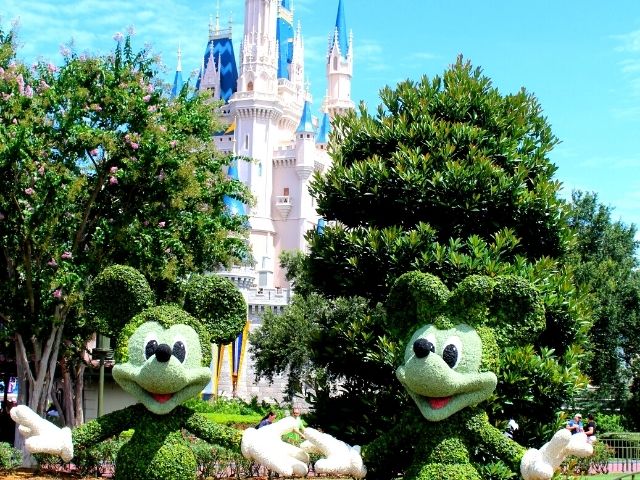 One of the biggest questions we here at ThemeParkHipster often get asked is how many days should I plan for my trip to Walt Disney World?

Obviously, there’s no right answer here because there’s no way to get absolutely everything done at all four parks, Disney Springs, the water parks, hotels, and more in a month, let alone a few days while on vacation.

Well there’s four theme parks, so we’re planning one for each day, and squeezing in some other fun things throughout our trip.

As solo travelers it’s so easy to bounce around the parks, hopping into single rider lines and skipping some things you definitely don’t want to do (looking at you, Astro Orbiter). So what does the four day basic itinerary look like for a ThemeParkHipster?

Because there are so few attractions it’s super easy to hit all of them in just a few hours. If you’re planning on trying to get on the uber popular Flight of Passage attraction try getting in line just before the park closes.

This is when the wait is the shortest since you likely missed being at the park at opening.

Since Disney’s Animal Kingdom closes early day one is the best day to explore Disney Springs.

Hop on board a bus or drive to the shopping and entertainment district. If you’re wanting to eat dinner somewhere it’s best to make a reservation.

A few places we cannot get enough of include Wine Bar George, Frontera Cocina, and Wolfgang Puck Bar and Grill.

Even though Disney’s Hollywood Studios is not technically a full day park you’re going to want to make sure you get this park on one of your middle days.

This is the best way to have as many chances as possible to ride Star Wars: Rise of the Resistance. Boarding groups for the attraction drop at 7 a.m. and 2 p.m.

For the first morning drop you can attempt to join a boarding group from anywhere at Walt Disney World, including your hotel room. If you are not successful at 7:00 you can try again at 2:00, but you must be inside Disney’s Hollywood Studios.

While at the park you’re definitely going to want to ride the other new attraction, Mickey and Minnie’s Runaway Railway. This ride is super cute and takes you into the cartoon world of Mickey Mouse and his friends.

Since Disney’s Hollywood Studios closes relatively early this would be a great night to spend enjoying your hotel, or playing a round of mini-golf at Disney’s Winter Summerland mini-golf course.

Whatever you do, do not schedule Magic Kingdom for your arrival or departure days. There is so much to do at this park that it will take you all day if you want to do it all.

We highly encourage you to get to the park at or around the official park opening. This is the best time to get on popular rides like Space Mountain, Seven Dwarfs Mine Train, or Big Thunder Mountain Railroad with little to no wait.

When afternoon rolls around grab lunch from Be Our Guest Restaurant, where you’ll dine inside Beast’s castle. This is a nice spot to sit down, relax and enjoy a good meal before starting the second half of your day.

After riding everything and catching the character cavalcades at Magic Kingdom you likely won’t want to do anything after the park. Head back to your resort for some much needed rest and maybe a good drink from the bar.

It’s the last day of vacation and there’s only one park left. Epcot is a great park to end with especially if you’re planning on leaving later in the evening to head back home.

After you get your bags packed drop them off at bell services while you hit the park.

Since Epcot does to have a ton of attractions it’s relatively easy to hit all of them in just a few short hours.

After getting everything in the front of the park like Soarin’ Over The World and Test Track completed head to World Showcase for a bite to eat. We love dining anywhere inside the Mexico, Germany, or United Kingdom pavilions for lunch.

After taking a stroll around World Showcase head back to your resort to grab your bags and head home.

Final Thoughts on How Many Days You Need at Disney World

I know this itinerary is a bit intense, so feel free to add more half-days at the parks, that way you can relax and enjoy your resort or spend a day shopping and dining at Disney Springs.

Have you done Walt Disney World Resort in 4 days? If so, let me know in the comment section below.