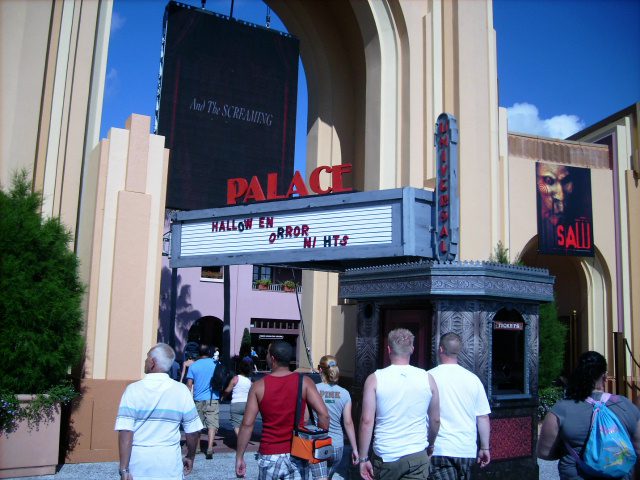 With the haunt season in full effect, I thought it’d be great to give you some of the best Halloween Horror Nights rumors, secrets and fun facts to get you excited for the event.

Halloween Horrors Nights (HHN), created by Julie Zimmerman and John Paul Geurts, began as Fright Nights over in Hollywood, California and was brought to Florida in 1991 for three nights.

Because of the incredible visionaries who first brought this event to life, over the past 29 years HHN has become the premier Halloween spectacular in the world!

The Birth of Halloween Horror Nights

The original concept of this event was to have a huge Halloween party throughout the Universal Studios Florida theme park. Little did the creators know that this spine-tingling affair would turn into a global phenomenon for over a quarter of a century.

Fright Nights featured more shows than any Horror Nights afterwards and only one haunted maze was available during the first year.

Scareactors were required to provide their own costumes and make-up for the event.

There was basically no marketing the year, except the announcement featured in a couple of the local newspapers.

The Orlando Sentinel and the Central Florida Business publications were the only ones who acknowledge the event a few days prior.

1 – Horror is Mixed with Mardi-Gras

Fright Nights (original name of Halloween Horror Nights) was marketed to local teenagers and adults as a place with a “Mardi-Gras” party theme, except with a ghoulish vibe.

During 1991, performers in The Dungeon maze were able to add their own spin to frighten guests.

One performer brought buckets of slime from Nickelodeon Studios to enhance his performance.

Unfortunately, one night an unsuspected guest received a huge amount of slime on accident.

In the first year of HHN the rat lady was created. One area of The Dungeon of Terror maze had guests walking on plexiglass.

It would light up to show a crypt underneath your feet as a girl would be in there banging and clawing while rats crawled all over her.

Fright Nights’ did not have an official icon of the year. Instead they focused on the classic monsters such as, The Wolfman, The Bride of Frankenstein, Frankenstein’s Monster, Dracula, The Creature from the Black Lagoon, and The Mummy.

During the 2nd year of the event, Universal added a scary element to their attractions. A term they coined as “horror-fied.”

Each attraction that was open would have an additional layer of terror added to it such as the Alien Forest in E.T. Adventure.

In the Alien Forest, guests would try to escape from a ghoulish demon infested forest to an alien world. Complete with dry-ice and scareactors around every turn.

8 – People Under the Stairs

All the sets and props from the movie, People Under the Stairs, would later be carefully packed and shipped to Florida and reassembled inside Soundstage 23 for the maze.

Another show debuted this year, which would become an HHN staple, Bill and Ted’s Excellent Halloween Adventure.

They would perform four shows each night with two different casts alternating for the event.

The show started with a stand-off between a Sheriff and a bank robber. Bill and Ted would then be seen transitioning through their time-traveling booth meeting Doc Brown (from Back to the Future), the Terminator, and Freddy Kruger.

Norman Bates got his chance to terrify guests. According to Paul Geurts, the Psycho house was the hardest house to physically create because the hotel had been built as a façade for filmmaking only.

Since the hotel of the Norman Bates house would only be used as a façade, the creators of HHN had to install a tent like structure to house the actual maze.

This technology would be the precursor to the famous Sprung Tents that you see today.

In 1994, Horrorwood was the first scarezone that featured the Chainsaw Drill Team, the Lizzie Borden Band and Axe Corps. This new concept provided a safer way of organizing the crowds on theme park streets.

Halloween Horror Nights 1994 was also the last time Robosaurus would appear at the event. The monstrous robot would not make an appearance for another twelve years.

1994 also brought about the “scareactor.” Since HHN was becoming one of the most popular Halloween events in the country, Universal wanted to have a school to organize and teach the actors of the event.

So, Ghoul School was created.

Here scareactors would learn things such as ways to apply one’s makeup effectively.

15 – An Icon is Here: The Curse of the Crypt Keeper

In 1995, Midway of the Bizarre was the first scarezone to offer a “chicken path” for those too afraid to go through the actual horrific area.

HHN 5 also offered safe zones for guests who needed to take a break from the terrors of the evening.

In 1996 Universal partnered up Goosebumps and other major brands to run a competition for an all expenses paid trip to Halloween Horror Nights. This was such a cool concept at the time to get more attention on the event.

Plus, a similar competition ran in my college town on a local TV station. It was how I got to go to HHN for the first time in 2005.

18 – A Parade at Halloween Horror Nights

1996 was the first year Universal introduced a parade at this haunted event. Since they had success with the Mardi Gras parade, it was only right to try it again during Halloween Horror Nights.

In 1998 the S.S. Frightanic was a life size ship built by Universal inside the whole queue of Earthquake. This house would give guests two different experiences called the Carnage Crew and Fear in First Class.

Insanity premiered on Soundstage 22 in 1999 as the first house to start using the Shadybrook asylum reference complete with demented inmates running wildly!

This asylum would have a special appearance of Universal’s most famous clown.

21 – The Clown is Officially Here

2000 brought about the introduction of Jack the Clown who was officially created based on the results of various guest surveys from previous years.

Jack Schmidt a.k.a Jack the Clown was a murderous circus performer under Dr. Oddfellow’s circus. He was murder by Dr. Oddfellow after it was discovered that Jack had been committing terrible crimes against innocent little ones.

This was the name of the first concept for the 2001 icon at Halloween Horror Nights. Edgar Sawyer would be a play on the name Edgar Allan Poe.

However, due to conflicts that arose, it would be changed to Eddie, the brother of Jack the Clown.

Eddie the violent, chainsaw carrying leather face icon would quickly be scrapped due to the tragic events in September of that same year.

2002 was the first year that Halloween Horrors Nights was featured inside of Islands of Adventure.

Islands of Adventure was meant to be Cindy’s dark playground were guests would go through different areas of the park that would explore the depths of her mind.

Unfortunately, due to many child abductions occurring across the country, this icon was not release in 2002.

In 2002 The Caretaker, Dr. Albert Cain, would replace Cindy as the icon for HHN 12. The Caretaker was known to lure innocent victims back to his Victorian manor for their untimely demise.

The story of The Director at HHN 13 follows Paulo Ravinski who was a snuff filmmaker insisting on adding real human torture to his films.

For the first time in HHN history, the 2004 event would be in both Universal Studios Florida and Islands of Adventure complete with the largest scarezone created called Field of Screams.

The Field of Screams would be located between the two parks right behind Seuss Landing.

Our favorite event returned back to Universal Studios and it ushered in a new wave of horror creation at the park.

This time the famous icons the Director, the Caretaker, the Storyteller and Jack the Clown would all takeover this incredible Sweet 16 year!

31 – Dungeon of Terror Returns and Other Classics

The Dungeon of Terror: Retold, the original house from Fright Nights would return for 2006.

There would also be spinoff houses paying homage to the previous years of Halloween Horror Nights such as:

2016 was the first time that Universal Orlando released the Unmasking the Horror Tour which took guests through a “lights on” walkthrough of selected house of the current HHN year.

In 2006, New Line Cinema licensed the use of Leatherface, Freddy and Jason to Universal with an official announcement on June 27, 2007 that the three legends would be in HHN 17.

This time Jack the Clown would be the ringmaster in this Carnival of Carnage!

On July of 2008, Dr. Mary Agana was introduced by Universal as the new icon. Throughout the summer, Universal would take fans on an in-depth story detailing Dr. Agana’s mental health work until one day she totally lost it to become Bloody Mary.

35 – Getting Married at Halloween Horror Nights

In 2010, Universal Orlando marketed HHN as the perfect place to “get hitched.” This was offered through a competition were food, beverages, entertainment, and a cake would be taken care of for the winners.

The haunted wedding would also come complete with scareactors to terrify wedding guests as the celebration went on. A couple from Vermont won this competition and were married inside Soundstage 22 on October 15, 2010.

The last house to be place inside the Jaws queue came in 2011 called, Saws N’ Steam: Into the Machine. Saws N’ Steam was also the first scarezone to be converted into a house.

2012 was the first time Universal incorporated a video game into a haunted maze. The Silent Hill franchise was the one chosen for HHN 22 and would feature a tall Pyramid Head character on stilts.

38 – A Werewolf in London at Universal

In 2013, the infamous werewolf puppets were created to be a real as the ones in the movie towering at 8-feet.

In 2014, this was the largest maze ever created at HHN that took guests through key scenes from the fourth season.

Classic scenes such as the Sanctuary at Terminus a.k.a West Georgia Correctional Facility and the iconic helicopter crash.

As you can see, there are so many hidden Halloween Horror Nights secrets and fun facts to know. Although I was able to uncover 39, there are still so much in-depth history behind this incredible annual haunt.

Halloween Horror Nights is hands down the best Halloween event in the world. So, you don’t have to worry about not having a good time if you plan out your evening in advance.

I hope I was able to tackle each one of your questions for HHN. Don’t forget to read the full Halloween Horror Nights Survival Guide here!

Scroll back to top
8shares