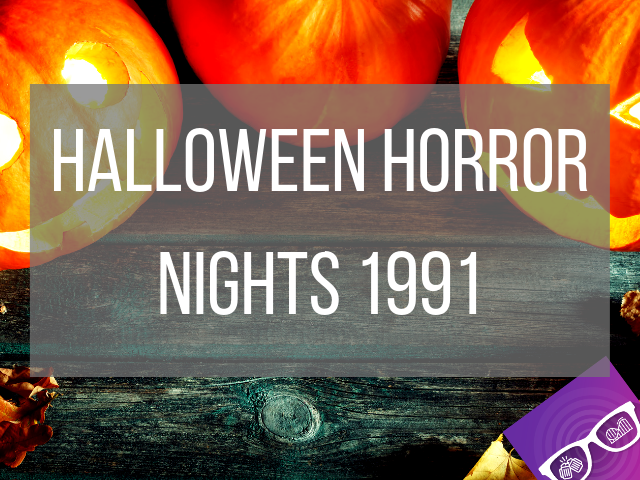 Halloween Horrors Nights, created by Julie Zimmerman and John Paul Geurts, began as Fright Nights over in Hollywood, California and was brought to Florida in 1991 for three nights.

My goal with this frightening series is to guide you down the road of the Halloween Horror Nights legacy at Universal Studios Florida.

The Birth of Halloween Horror Nights

The original concept of this event was to have a huge Halloween party throughout the Universal Studios Florida theme park. Little did the creators know that this spine-tingling affair would turn into a global phenomenon for over a quarter of a century.

Fright Nights featured more shows than any Horror Nights afterwards and only one haunted maze was available during the first year. Scareactors were required to provide their own costumes and make-up for the event.

There was basically no marketing this year, except the announcement featured in a couple of the local newspapers. The Orlando Sentinel and the Central Florida Business were the only ones who acknowledge the event a few days prior.

“Universal Studios Plans Fright Nights’ For Halloween,” was the title of the article in one of the local Orlando newspapers. The not so hype announcement stated that this event would run from 6 p.m. until midnight October 25th, 26th, and 31st.

Randy Garfield, the executive vice-president of marketing, emphasized to the media that this event would include the best classic favorites such as Dracula and The Mummy with modern favorites of that time such as Beetlejuice and Ghostbusters.

How much was a Halloween Horror Nights ticket in 1991?

Before hordes of visitors rushed to the scary event, Zimmerman and Geurts got together to create what would morph into the magnitude of a brand that it is today, Halloween Horror Nights.

In 1990 Geurts, an outside contractor, sat down with Zimmerman to produce an event that didn’t compete directly with Disney.

Fright Nights would be aimed at local teenagers and adults as having a “Mardi-Gras” party theme, except with a ghoulish vibe.

The goal was to create the biggest Halloween party where the whole park was utilized.

Planning continued into early 1991 where the title Fright Nights’ was announced. However, after the first event, Universal was sent an assertive letter stating that the title had a copyright holder.

According to Geurts, no one thought Fright Nights’ was copyrighted.

One of the main hurdles for the inaugural event was the budget.

To attack this hurdle, lots of lighting effects were creatively placed and lit to bring about a spooky environment. Projections with terrifying patterns and layers also accompanied the lighting to help intensify the mood.

Dry-ice machines with frightening music was used to create the “streetmosphere.”

The budget also allowed for the building of a haunted maze in the Jaws queue building. According to Geurts, the queue for Jaws added a claustrophobic vibe they were looking for.

As written in the Halloween Horror Nights: The Unofficial Story book, the layout was a series of prison cells in a maniacal dungeon where the freaks ruled and guests were being tortured.

The duration of the haunted maze was 12 minutes.

During this year, performers in the maze were able to add their own spin to frighten guests. One performer brought buckets of slime from Nickelodeon Studios to enhance his performance.

Unfortunately, one night an unsuspected guest received a huge amount of slime on accident.

It was on this haunted maze that the Rat Lady was born.

One area of The Dungeon of Terror maze had guests walking on plexiglass. It would light up to show a crypt underneath your feet and a girl banging and clawing as rats crawled all over her.

This was another hit for Universal and The Rat Lady became a Universal Halloween Horror Nights tradition.

Besides the haunted maze and the streetmosphere were a variety of shows, character interactions, and a costume contest.

The Monster Mardi Gras Costume Contest was held nightly at the top of Hollywood Boulevard. Guests in intellectual properties were discouraged and parents were asked to make sure their kids were in full makeup and at the park by 5 p.m. (park closing).

Beetlejuice made his rounds throughout the park and also starred in two of the night’s shows:

The Chainsaw Massacre show debuted at Halloween Horror Nights this year. It was a bunch of chainsaw maniacs who had taken the stage to sacrifice many unfortunate guests.

Plastic body parts were tossed into the crowd with sprays of fake blood (water) to top off the scare. This show would later evolve into the famous chainsaw Drill Team.

Other Shows from Halloween Horror Nights 1991

All the shows were comparable to a travelling circus that had taken over New York and other areas of Universal Studios. The Gravediggers, Paul Revere & the Raiders, and Starshower were also a few of the musical acts of Fright Nights’.

Universal Studios also included a few daytime attractions that were open during the event.

Fright Nights’ did not have an official icon of the year. Instead they focused on the classic monsters such as, The Wolfman, The Bride of Frankenstein, Frankenstein’s Monster, Dracula, The Creature from the Black Lagoon, and The Mummy.

Be sure to leave your own stories and comments below and let me know some of your favorite tips when going to HHN. Also let me know what your favorite Halloween Horror Nights maze and scarezone is of all time.

Let me know what your favorite Halloween Horror Nights maze and scarezone is of all time in the comments section below.