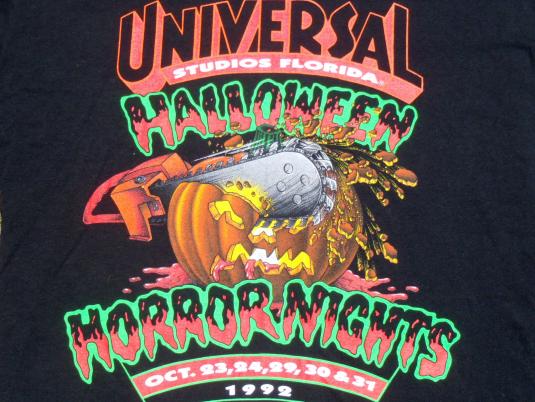 During the 2nd year of the event, Universal added a scary element to their attractions. A term they coined as “horror-fied.”

Because of the success of the first year, Halloween Horror Nights would have a larger budget ($1 million) and would aim at becoming the number one Halloween event in America.

Joseph Curley, Universal Studios Florida PR Manager at the time, stated that the 1992 year would be like Mardi Gras in New Orleans.

The goal was to bring back everything that was successful the first year, plus a few new attractions, lots of pop culture references, and an emphasis on merchandise.

HHN 92 saw Universal amp up the scare factor by adding an eerie presence to the park with scary music, keeping guests off-balance.

The Dungeon of Terror would return this year using the Jaws queue as its location again.

The house would be improve from the humid, hot box to an air-conditioned scare that was longer in time than the previous year.

More terrors were also added and a mirror effect only enhance the scares coming from the monsters inside the maze.

People Under the Stairs

The People Under the Stairs was the new haunted attraction in the 1992 season. This attraction was based on the 1991 Wes Craven film with filming taken place before in one of the Universal Studios Hollywood soundstages.

All the sets and props would later be carefully packed and shipped to Florida and reassembled inside Soundstage 23 for the maze.

According to Paul Geurts, producer of the event, they tried claustrophobic environments in The People Under the Stairs with great success so an open area was added at the very end of the attraction dressed in a night’s sky.

Unfortunately, people would pause at this scene causing a back up in the queue, which led to the idea of “scare-moving.”

Scare-moving happens when guests arrive to a scene that needs to stay clear, and scareactors are placed in key lurking areas to jump out at select times in order to get the guest to run away quickly.

The haunted maze would take disturbing queues from the original film such as cannibalism and mutilation.

Fake blood would be splattered everywhere even on guests, which led one guest to complain and this prohibited scareactors from improvising with their own props.

The Bates Motel was the official photo spot for the event with Pendragons Magic Show returning this year. Thunderdome debuted this year, loosely based off the Mad Max Beyond Thunderdome movie.

Just imagine reading that line in the newspaper and responding to it as an applicant in the early 90s.

There were no official scarezones this year. However, there were monsters given the opportunity to roam the park.

Save $77 on Universal 2-Park 3-Day Park-to-Park and get 2 extra days FREE! Visit both Universal Studios and Islands of Adventure on the same day.

Most of the scareactors congregated around the New York, San Francisco, and Amity areas of the park.

Another show debuted this year, which would become a Halloween Horror Nights staple, Bill and Ted’s Excellent Halloween Adventure.

They would perform four shows each night with two different casts alternating for the event.

The show started with a stand-off between a Sheriff and a bank robber. Bill and Ted would then be seen transitioning through their time-traveling booth meeting Doc Brown (from Back to the Future), the Terminator, and Freddy Kruger.

All the while jamming to top pop artists of the time such as MC Hammer, Madonna, and the Blues Brothers.

Halloween Horrors Nights had officially made it mark and was now here to stay!

Universal Rides Opened During the 1992 Event

This year, there were Haunted “Horror-fied” attractions added which sounds so cool!

4 – Voyage into the Unknown

Let me know what your favorite Halloween Horror Nights maze and scarezone is of all time in the comments section below.