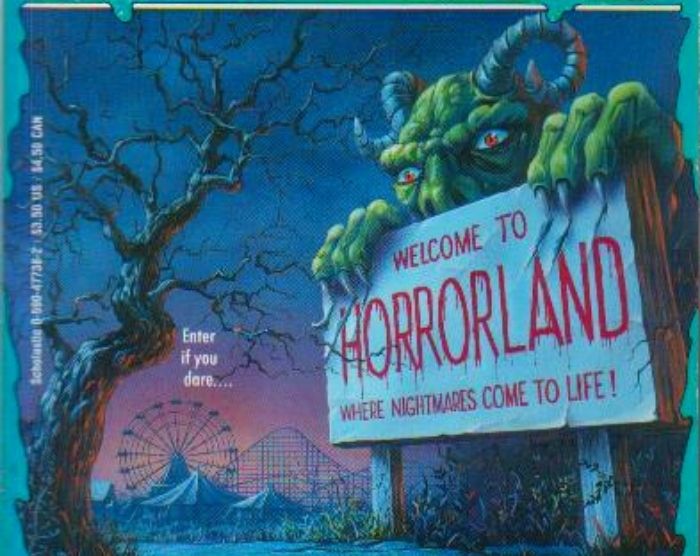 What I’m Reading: Goosebumps One Day at Horrorland

Many of you may not know it (or you probably can guess), but I’m a big kid at heart. It shouldn’t be a surprise that at times I like to delve into some of my favorite book series I enjoyed as a child (and still do).

I am reading Goosebumps One Day at Horrorland by R. L. Stine. This was my favorite book of the horror-fantasy book series because it not only kept the spooky, quirky fireside story traditions; it combined it with my favorite passion…Theme Parks!

Goosebumps One Day at Horrorland

This was the 16th book published by Scholastic in 1994 for the Goosebumps series. And as you may suspect, adding the theme park element truly contributed to the horror of this book.

Especially since kids love the thrill of theme parks and the creepy vibe that amusement parks are known to have.

Told in R. L. Stine fashion, the Morris family while on their way to Zoo Gardens, gets lost and stumbles upon Horrorland. The car explodes, leaving the family stuck at Horrorland.

This park seems perfect with no lines, no crowd, and free admission until they’re greeted with monstrous staff (known as Horrors) and iffy attractions which lead to an unpleasant theme park experience.

Something is definitely not quite right with Horrorland.

For instance, it’s a deserted theme park. Which is something to question since thrill parks are rarely deserted. Here at Horrorland the only guests the Morris come across are families with crying kids.

There are also lots of signs that say “No Pinching” which is a weird thing to come across in a park. Plus, the rides and attractions offered at Horrorland come with some type of mortal danger.

Main Horrorland Rides and Attractions Mentioned in the Book:

As the book comes to an end, it is revealed that the Horrors are not humans, but real monsters…

… kind of like Halloween Horror Nights come to life.

Plus there are signs stating, “NO EXIT. NO ONE LEAVES HORRORLAND ALIVE!”

The Morris family then realizes that their on The Horrorland Hidden Camera Show that is there to bring them to their eternal afterlife resting place.

After the initial shock of things, the family then realizes that the only way to defeat the Horrors is to PINCH THEM!

Goosebumps One Day at Horrorland and the Theme Park Aspect

Is it an amusement park or a theme park?

According to Merriam Webster, an amusement park is a commercially operated park having various devices for entertainment (such as a merry-go-round and roller coaster) and usually booths for the sale of food and drink.

Whereas a theme park is an amusement park in which the structures and settings are based on a central theme.

Based on those two definitions, Horrorland is definitely a theme park. When you arrive there as a visitor, you don’t know that the Horrors actually run the show. You just think it’s a park centered around scaring you with its creepy, yet thrilling attractions.

Why did the theme park concept work so well for this horror book?

There’s something a bit too real and creepy about the rides at Horrorland. When theme parks or amusement parks work at their full capacity, it seems to be the best escape for everyone.

The colorful buildings, the happy workers, and the laughter coming from guests make you feel so good inside.

However, when an amusement park has been abandoned, you feel the opposite of everything I just mentioned. The colors are no longer vibrant, but a dampened hue of their former glory.

Happy workers disappear with only remnants left of the life that was paused at the park and laughter no longer radiates the area. Instead, you get the vibe that something’s just not right anymore and at any second you could become a lost visitor in the abandoned theme park forever.

Because theme parks can play on so many aspects of your psyche like happiness, fear, hesitation and relief, it’s no wonder that the concept worked so well for this Goosebumps book.

How do theme parks functions with a horror aspect?

As previously mentioned, the parks have a tendency to play on both your comfort zone and your zone of fear. Theme parks and amusement parks are the only places where we see some of our biggest fears come to us face-to-face and we jump right in.

In the Goosebumps book, One Day at Horrorland, we are met with the contrast of visiting Zoo Gardens vs Horrorland on page 11.

Even though both can give the characters of the book an enjoyable time, the adolescents are convinced that Horrorland will be better?

As they easily stated in the book, “It’ll be safe…”

Are amusement parks a “riskless risk?”

According to Nye, amusement parks present a space of riskless risk.

This concept is how the idea of merging a theme park with the Horrorland story worked so well. There are so many “red flags” in the book that the reader can easily pick up on showing just how much we put our faith into theme parks today.

Below are the following examples that I found in this R.L. Stine book:

1. Theme parks should be safe, so why is the mother questioning Horrorland:

If you’ve ever read a Goosebumps book before, then you know that grown-ups can be an obstacle of the main character and we as the reader are not to trust them.

2. The family sees signs of the different locations in the park such as Werewolf Village:

Although the warning is obviously there, the notion that theme parks are safe makes the signs seem more along the theme of the park. Even if all the signs are actually true at Horrorland.

3. Lines between safety and harm are blurred:

Although amusement parks are thought to be safe space for families, Horrorland shows us just how much faith we put into these parks around the world. We get inside their “bubble” and our cautiousness goes right out the door.

We believe that every intense experience or attraction is fake or has been tested enough to keep us safe.

As you read One Day at Horrorland, you come back to your senses as it is the complete opposite to what a theme park is supposed to be. Especially in the eyes of a child.

Goosebumps One Day at Horrorland Merchandise, Books and TV Shows

The Horrorland book was so successful that it spun into a full out book series along with merchandise and a popular Goosebump television episode.

One Day at Horrorland Book vs TV Episode

There are quite a few differences noted that are missing from the television episode:

Final Thoughts and One Day at Horrorland Review

As you read this book, be ready to you choose your fear, experience, and attraction. Reader beware, you should only do it for your own thrill and not the expectation that you will be kept safe at Horrorland.

Instead of picturesque day like one found at Disney, this enters a demented world more like Halloween Horror Nights. So, be ready for casket water rides, a television show with no mortal winners, and much more terrifying attractions.

Something I do want to point out is as the book ends, the family is given the option to go back with free passes for next year. This form of satirical comedy was so funny to me and so true as you see this a lot with horror events and amusement parks in general.

As you can see, re-reading One Day at Horrorland was so much fun.

Although there were lots of situations I would not want to be in, I did enjoy thinking about just how cool it would be if an actual theme park like this existed. Especially here in Orlando, Florida, The Theme Park Capital Of The World.

Overall, I highly recommended this book for anyone who misses the R. L. Stine books of the 1990’s and who loves theme parks alike. So, enjoy yourself at Horrorland where nightmares come to life!

Don’t forget about the sequel: Return to Horrorland

Are you a fan of One Day at Horrorland? If so, let me know in the comments section below.

UP NEXT: 5 Fun Things to Do in Orlando for Fall