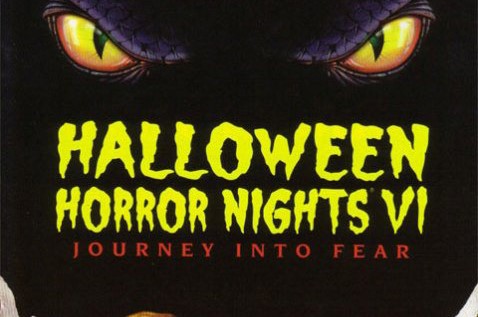 Halloween Horror Nights VI Journey Into Fear marketing featured a demented creature lurking in the dark, chanting the tagline in advertisements. The event featured three mazes, one scarezone, three shows, and an all new parade. The event was held for fifteen nights from October 11th to November 2, 1996.

Halloween Horror Nights 1996 was the first year to see the Festival of the Dead Parade, a Mardi Gras-style parade. The Crypt Keeper was not the icon that year; however, he was still featured in the event with his own house and as the leader of the parade.

HHN 6 was also the debut of Terminator 2: 3D at Halloween Horror Nights.

Claim to Fame: The event featured the return of The Crypt keeper, who hosted his own parade.

Midway of the Bizarre Location: Amity

The Crypt Keeper’s Festival of the Dead Parade Location: Parade Route Throughout Park

Universal Rides Opened During the 1996 Event: