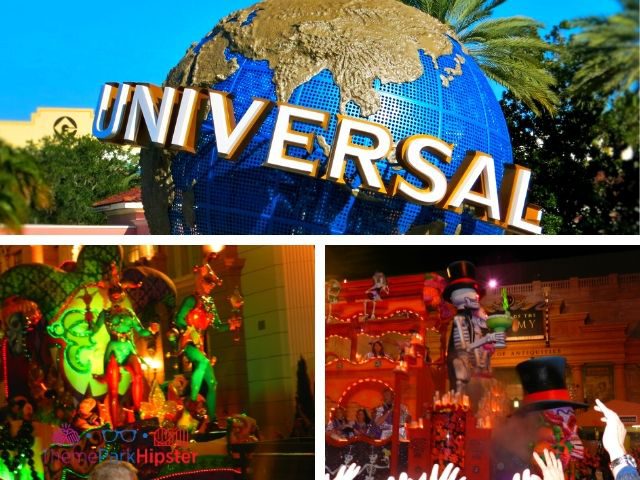 Universal Studios is fun at any time of year, but during Mardi Gras, there is an extra sense of celebration and colorful joy throughout the entire park.

If you are considering going, continue reading for everything you need to know to make the best out of your trip.

Mardi Gras, also known as Fat Tuesday, is a tradition started by Christians to celebrate the last day of eating before Lent, a time of fasting.

Today, people with various religious backgrounds celebrate it as a day of fun, celebration, and, of course, eating.

One of the biggest authentic Mardi Gras celebrations in America is in New Orleans.

During Mardi Gras, the streets of New Orleans turn into a festival complete with lots of colors (mainly purple, green, and gold), food, drinking, music, and entertainment.

Universal Studios emulates the classic New Orleans’ street parties in a family-friendly way that everyone can enjoy.

For a no obligation, FREE Universal Orlando Vacation Quote you can fill out the form with Destinations in Florida by Clicking HERE!

How did Mardi Gras start at Universal Studios in Orlando?

Believe it or not, this festive event evolved from the annual Halloween Horror Nights at Universal Studios.

During the second year of the haunted event, Joseph Curley, Universal Studios Florida PR Manager at the time, stated that the 1992 year would be like Mardi Gras in New Orleans.

From that initial statement, Mardi Gras would go on to make its official debut at Universal Studios in 1995.

Now that you understand how Mardi Gras landed at Universal, let’s go over what you can expect at this epic celebration.

This year you can enjoy the magic of Mardi Gras at Universal Studios from February 1st to April 2nd of 2020.

Every night there will be a street parade full of awe-inspiring street performers decked out in colorful costumes with sparkles, feathers, and beads, and performances by authentic New Orleans’ musicians.

Plus, delicious replicas of the same Cajun food you would eat if you went to The Big Easy.

The best part is, all the celebration (except for the food) is included in your purchase of a park pass, whether you bought one just for the day, a seasonal pass, or an annual pass.

The Mardi Gras parade is the main attraction of the Universal celebration, and you do not want to miss it!

This colorful, high-energy parade is full of floats, street performers, and costumed revelers throwing beads and other goodies into the crowd.

You can sit anywhere along the parade route to enjoy the show.

It will take about 15 magical minutes for the parade to pass by your spot, and then you can head off to any other adventures you have left for the day.

Parade times vary based on date, so here is a breakdown of the times:

Keeping to its name (Fat Tuesday), there is plenty to eat in Universal Studios throughout the entire two-month celebration.

Opening at four every night of the celebration, the French Quarter Courtyard is full of classic. Cajun options such as jambalaya cooked just like you would get it in New Orleans.

Everything you find will be lip-smacking good!

Instead of eating your way around the world at Epcot, you can experience Universal’s own take of this food adventure inspired by carnivals worldwide.

Other Festival Foodie Adventures to Discover

Just in case you thought those were your only New Orleans inspired treats to try, there are also other delicious dishes available throughout Universal.

On select nights you can take part in a fish boil (or chicken and sausage if you are not a fish fan) on the following nights:

You have to make a reservation for this event. The times start at 2:45 p.m. and last an hour each.

With a reservation to the Bayou Boil, you also get access to a special parade viewing area where you can watch the parade while eating King-cake, beignets, and both non-alcoholic and alcoholic beverages.

If you have a sweet tooth, it may be fun to partake in the Mardi Gras Feast and Floats Dessert Party.

During this event inside Cafe La Bamba, you will spend an hour before the parade eating specialty desserts and drinking sparkling wine, sparkling cider, or a variety of non-alcoholic drinks.

Afterward, you will have special viewing to both the parade and the Cinematic Celebration in Central Park while you sip on decadent non-alcoholic drinks.

This party takes place on the following nights:

Now that you know what to expect from this Cajun celebration, let’s go through ways to make the most of your time there.

There are so many delicious Cajun foods to try out during the Mardi Gras celebrations at Universal Studios, just like in New Orleans.

Most likely, you will want to try as many different cuisine options as you can, and full-size meals do not allow you to do that, so it is a great idea to share and sample.

If you are going with other people, you can order a single order (or a double order if there is a lot of you) of any menu item and share it between the group.

Do not worry if you are traveling alone; you can still sample with the best of them and try as many foods as your heart desires.

With this lanyard, you can get a certain number of items (based on the price) in a sample size from the restaurants in the French Quarter Courtyard.

Additionally, if you go back for a second night, you can continue to use your lanyard from the night before if you did not use up all your samples.

Read: What to Pack for Universal Studios

2 – Plan Ahead Your Parade Spot

The later the time the parade starts, the more you have to strategize getting to your spot. Which spot you want really depends on what the rest of your night looks like.

If you are planning to go to a concert right after, try to get a spot at the edge of the street by the Music Plaza Stage.

Beyond that, some of the best places are in front of the Mummy Ride, in an area reserved for families by the Brown Derby Hat Shop, and if you are a pass-holder, in front of Mel’s Drive-In.

If you are banking on any of these spots, make sure you get there EARLY as the spots fill up fast.

No matter where you are planning to watch the parade from, you want to try to get there at least 30 minutes early (earlier on weekends) and an hour if you have a larger group and want to sit upfront.

You may be able to find front row spots a little later if you are a small party or going solo, but you should still plan to get there early.

Read: How to Do Universal Studios in One Day

3 – Have Fun Interacting with the Street Performers

For a few hours before the parade begins, there are usually street performers out on the street.

Watching them perform and interacting with them can be a lot of fun.

Additionally, if you are trying to save a coveted parade spot, they can provide lots of fantastic entertainment while you wait.

Furthermore, if there are musicians around, join in and dance to get the true feeling of Mardi Gras in New Orleans.

Yes, it is true, you can get a spot in the parade if you are lucky.

The easiest way to do this is if you are a Passholder.

Passholders can sign up themselves and up to five guests online for a chance to ride on a float in the Mardi Gras parade.

After you sign up, you wait to get a confirmation email if you are selected.

If you are not a Passholder, you still have a chance to get in the parade, but it is not as high.

You used to have to go to the stand-by line for up to two hours before the parade starts, but now you can use the Virtual Queue Line that’s on the Universal Orlando App.

Usually around 12 p.m., Universal will open up spots throughout the day for you to get that coveted spot. So, be sure to keep trying just in case it doesn’t work for you the first time.

5 – Get to the Concerts Early

Front row seats are claimed fast (sometimes two or more hours before the concert even starts), so if you want good seating, get there as early as you can.

If you are planning to spend several days at Universal Studios during the Mardi Gras celebration, it may be a good idea to see the parade and go to a concert on two separate nights.

No matter who you are, you are sure to find something fun to do at Universal Studios during Mardi Gras Season.

You can spend the day enjoying all the fun that Universal already has to offer, and as it gets a little later in the afternoon, you can enjoy the Mardi Gras festivities.

Whether you are there for one day or many days, with a group or going solo, you will have a blast!

Are you read to make you trip over to Universal Studios? If so, read 19 Amazing Ways to Do Universal Orlando on a Budget.

Scroll back to top
5shares