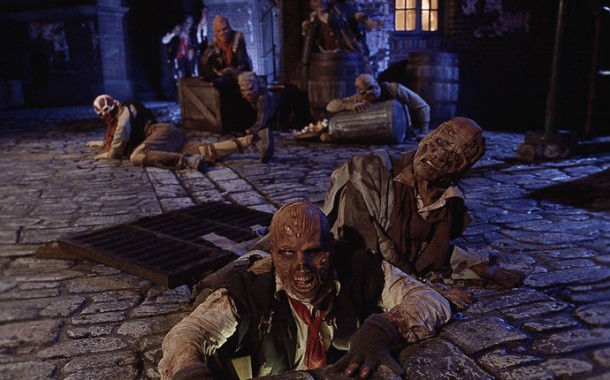 In 1995 Universal had to find a way to recreate Halloween Horror Nights due to its popularity. The pressure to top previous years was present with the event creators. This problem led to the creation of a main character to distinguish each year.

“We don’t make any religious overtones – nothing satanic. We don’t go there,” Zimmerman said in an Orlando Sentinel interview. “We’ve had witches call us who were concerned that we would portray them in an unhealthy light and we respect that.”

There were also thoughts of adding a children’s area to draw in more families, but that didn’t happen.

Theme/Tagline: The Curse of the Crypt Keeper

Claim to Fame: Event icon was officially introduced at this year’s event.

Freakish acts reach out from the grave to entertain you!

Midway of the Bizarre Location: Amity

A peaceful fishing village of Amitiville has been transformed into a carnival of horrors.

The boys are back for more ghastly shenanigans.

The centerpiece show that features plenty of pyrotechnics, fireworks and lasers.

Come On Down with Beetlejuice, your ghost host with the most…if you dare to take the challenge of the wildest game show in the world!

A rock-and-roll revue with crypt jams.

BEHIND THE SCENES OF HALLOWEEN HORROR NIGHTS 1995

Universal Rides Opened During the 1995 Event:

Halloween Horror Nights V set the tone and blueprint for the event that we witness to this day. The creators found that Halloween sweet spot and has continued to top themselves each and every year.