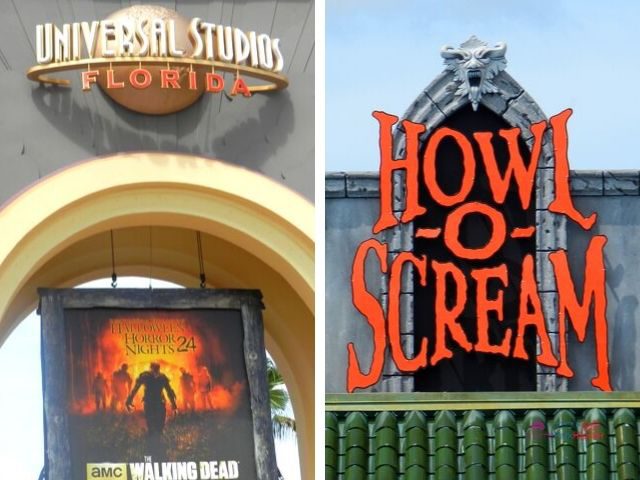 What to Know Before You Start Your Halloween Adventure

Before we get into this ultimate SMACKDOWN, lets go through a few things you should know before make your way out to each event.

What are the Busch Gardens Howl-O-Scream Dates 2022?

Get up to 63% off of your Busch Gardens Howl-O-Scream tickets with Groupon TODAY!

What are the Halloween Horror Nights Dates 2022?

What should I pack for Halloween Horror Nights and Busch Gardens Howl-O-Scream?

When is the best time to visit Howl-O-Scream and Halloween Horror Nights?

The best time to attend Howl-O-Scream is during the first few opening weeks of the event.

What time is Halloween Horror Nights?

Get YOUR Halloween Horror Nights Tickets with The Park Prodigy TODAY!

Now that we have some of the basics covered, let’s go through the difference between Howl-O-Scream vs Halloween Horror Nights.

Hopefully, at the end of this article you’ll be able to figure out which one is best for you.

It’s no secret that Halloween Horror Nights lines can get ridiculously long. It is the most popular Halloween event in Central Florida.

Busch Gardens Howl-O-Scream can also have busy nights. Especially the nights leading up to Halloween, but they hardly ever surpass a busy night in compared to Halloween Horror Nights.

For this, a lower crowd level makes for a more intimate and scary setting at Howl-O-Scream.

When Halloween Horror Nights first started, the houses were original concepts with very little outside brands to interfere. That has changed within the past decade of the event.

For this reason, Halloween Horror Nights has lost a bit of its originality since it has to please the partnerships it deals with each year.

Even with all of this limited creativity, when you combine the Universal Creative Team unique storylines for their original houses and the unnerving concepts of the intellectual properties, they still dominate the Halloween event game.

Howl-O-Scream has gotten better every year with their storytelling in the mazes, but they still can’t compete with Halloween Horror Nights in this category.

After all, Universal Studios was originally created as a working studio with legit writers, producers, directors and other creatives.

The production quality of the overall event at Halloween Horror Nights is phenomenal. Of course, they have a much bigger budget to work with, but Busch Garden is not too far off.

Since Busch Gardens budget may be smaller to work with for the props, they are able to have scareactors compensate for that lack of budget.

This creates some of the most intense houses in regards to the unleashing of the scareactors abilities.

But still, in regards to overall horror quality, Universal wins this one.

At Halloween Horror Nights you get a full out Hollywood type of production with a foreboding atmosphere of fear.

Over at Howl-O-Scream, there’s a constant need for the scareactors to frighten you with no end in sight.

These frights are usually more jump scare related than the legendary eerie type of feel known at Universal Studios.

Many theme park visitors like the jump scares as a way of having that constant adrenaline flow throughout the night.

Howl-O-Scream definitely comes through for this type of fear, but based on your own preference of scare tactics, HHN may be more down your ally.

Affordability: What does it cost to go to Halloween Horror Nights or Howl-O-Scream?

As you can probably tell, in order for Universal to pull off such an epic creation and to have the many Intellectual Property partnerships, their budget is much higher than Busch Gardens.

This can be a reason as to why the ticket prices are much higher at Halloween Horror Nights.

We also can’t forget that it is dubbed as the “World’s Premier Halloween Event,” which can add a few more dollar signs to your night.

With Bill and Ted no longer at Halloween Horror Nights, that infamous pop culture show absence is definitely noticeable. Even with the addition of the incredible nighttime shows, the entertainment has suffered.

What has saved Halloween Horror Nights in this category was the new Halloween Marathon of Mayhem show.

The fantastic lagoon show featured legendary moments inspired by some of the Halloween classic images.

Recommended: 35 Scary and Fun Things to Do in Florida for Halloween

This year Halloween Horror Nights will debut Ghoulish! A Halloween Tale. The brand new show takes place on their lagoon and follows the Grim Reaper on his sinister dealings about what happens afterlife.

Halloween Nightmare Fuel Wildfire highlights a new Dreamer in the depths of a new nightmare set to an intense metal, rock and electronica score..

Busch Gardens has improved their entertainment options in a major way!

Fiends does similar pop culture bashing like Bill and Ted with Dr. Frankenstein and his assistant Igor as the main characters.

This show is definitely a Howl-O-Scream classic or should I say the naughty nurses are a classic for this Tampa experience.

Even with two additional shows at Busch Gardens, HHN night shows are world class and for this, I have to give this category to Universal Orlando.

Since the early years of Halloween Horror Nights, theming has become a very serious asset to the event.

So much so, that many Halloween experiences around the country have to have this in order to compete with Universal.

Howl-O-Scream has a general theme each year, but unfortunately it is lost once you enter the park.

Since Howl-O-Scream keeps many of the same houses each year, it’s hard for the mazes to reflect the theme of the new year.

Halloween Horror Nights changes its haunted houses every year, so the creative team at Universal always keep a cohesive theme to the event.

This carries over through its mazes, its scare zones, it entertainment, and little things like dining.

As I write this section, I don’t want you to think that you won’t have fun at both parks, but the Universal Studios Halloween Horror Nights crowd is much more “tamed.”

Perhaps the presence of the Orlando Police Department plays role or perhaps the content is made for a more mature audience.

Many of the visitors to HHN are coming from all over the world just for this event.

At Howl-O-Scream it’s a more relax environment, with the expectation of just pure, unadulterated fun.

You’ll find more locals attending this event. Plus, you’ll get way more jump scares that keeps you on your toes throughout the night.

As you can see, there is something for you at either event. I recommend visiting both during the Halloween season so that you can make you own decision on which event is better.

Both Halloween Horror Nights and Howl-O-Scream have scare zones, fun entertainment, lots of haunts, and intense mazes for you to enjoy.

Now, I want to hear from you. Which do you think is better, Halloween Horror Nights or Howl-O-Scream? Let me know in the comments section below!