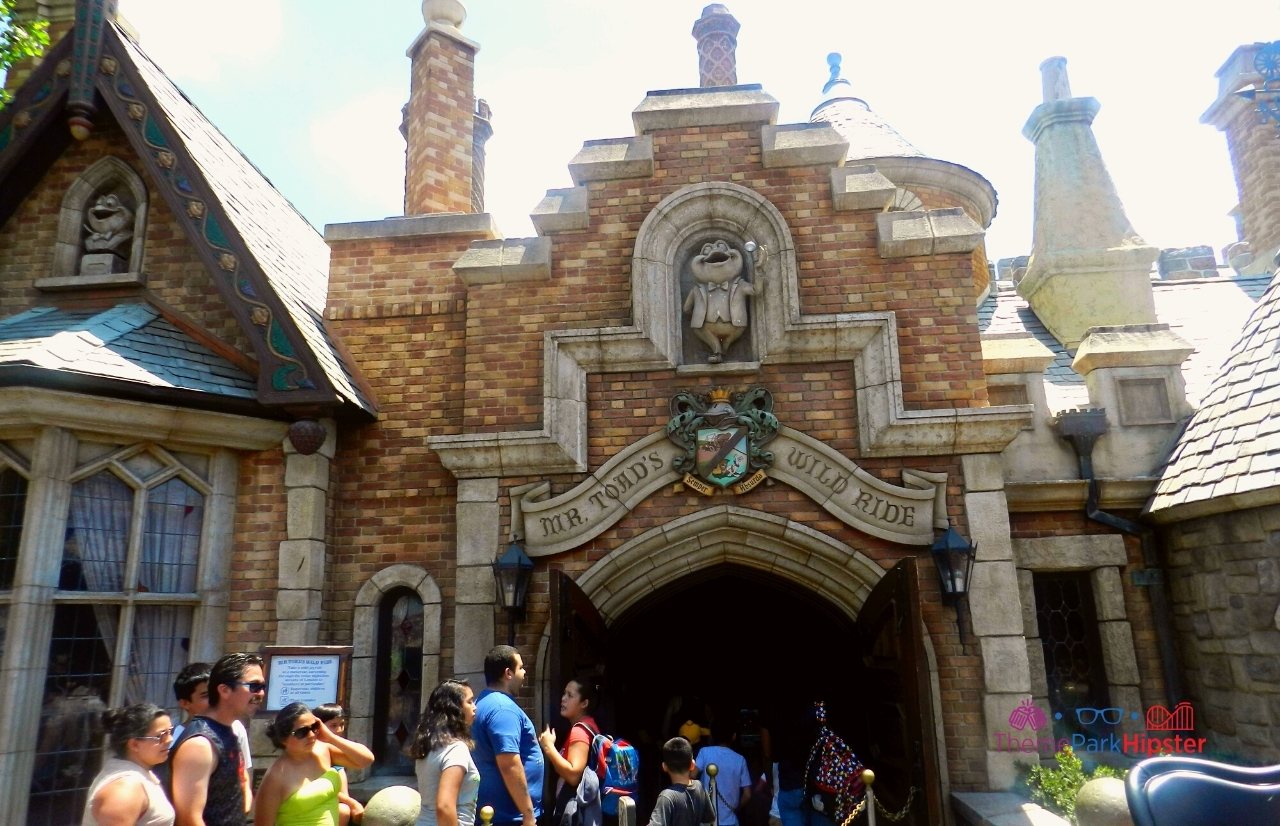 Let me preface this article by stating that Mr. Toad’s Wild Ride is one of my all-time favorite Fantasyland attractions! I was very excited to rewatch the film for the purpose of this article.

This classic attraction at Disneyland is the only one of its kind in any Disney Park. Originally, there was a second incarnation located in Magic Kingdom and was closed in 1998.

Currently, The Many Adventures of Winnie the Pooh sits on the grave. It was an opening day attraction when Disneyland opened in 1955. Today, it’s not the same as it once was.

Are you familiar with the ride? Some people like to joke and call it “The Hell Ride” because of the….ending. Don’t worry, it will all make sense as you read on!

Today, we will be touching on the following about the ride:

Mr. Toad’s Wild Ride is based on a very little-known Disney film “The Adventures of Ichabod and Mr. Toad,” which is loosely based on the book “The Wind in the Willows“ by Kenneth Grahame.

Walt Disney adapted several of the classic films from books and fairytales, and this one was no exception.

The film was part of a package film and was the 11th in the Disney animation lineup. It was actually the very last of the package film of the 1940s era.

We follow J. Thaddeus Toad, ESQ. who is known to have a love of fads, doesn’t care about the cost and is owner of the esteemed Toad Hall. He is called upon my Rat and Mole to control his latest mania regarding a horse and buggy, which is quickly replaced when he sees a motor car for the first time.

He escapes the house arrest and is later charged with car theft. That’s a long story in itself so you’ll just have to watch the film because it really is just WILD. Totally worth a watch. There are court cases, a weasel gang, real estate dealings, etc. You can get the gist of this film’s vibe.

For Disneyland’s version, you start your journey in Toad Hall, crashing through the library, and having some close calls as you see badger, mole and the weasels.

As you exit, you find yourself careening through the countryside, by the town docks, past rat’s house, going over bumpy train tracks, through a bar for a drink, and a quick stop to the courtroom where you are found guilty of your crimes.

Unfortunately, you meet an untimely end after being hit by the train and go about a ride through hell. After you are granted a reprieve, you escape hell and are returned safely back to the unload area. Like I said, it’s wild!

Similarly, to its predecessor, Mr. Toad’s at Disney World was an opening day attraction and was still a dark ride. What made this version unique was that it had two boarding areas that were separate.

This meant depending on which side you got, you would get a different riding experience as they were on separate tracks! Sometimes, the vehicles would head towards one another, giving the effect of an oncoming collision.

It was truly one of the most popular attractions during its time and despite protests and petitions, it was closed to make way for The Many Adventures of Winnie the Pooh.

On one side, you would be in your vehicle leaving Toad Hall, passing by a barn and a tunnel with warning signs. Afterwards you would enter the plaza and come upon a policeman and enter the courtroom where you are declared guilty!

You pass by jail cells and a shootout between policemen and the weasels. You would then move along some train tracks and get hit, upon which you would enter the hell scene and return back to the boarding area.

Moving on to the other side, you get the same scenes from Toad Hall to the plaza with some different scenes. They were the trophy room in toad hall, a gypsy camp and the Toad Hall kitchen.

Afterwards, you can see the weasels hiding out in the bar. Entering the countryside, you would pass by rat’s house and onto the train tracks. You would hit the hell scene shortly after and come back to the boarding area.

Mr. Toad’s Wild Ride at Disneyland: Many Changes Over the Years

The Disneyland version remained the same up until 1982 when it shut down temporarily for a refurbishment and remains the same to this day since 1983. So, you may be wondering, what happened to Mr. Toad’s Wild Ride?

Here are the big differences between the 1955 original version of Mr. Toad’s Wild Ride at Disneyland to the current one of today.

One of the big things I get asked regarding this ride is whether or not it’s scary for children. Personally, and this is my recommendation as someone who has worked in childcare for several years, is that I think it’s good for children above the age of 3.

But you know your child better than me, so if they are a shy child who might scare easily, I would skip this one for them.

At times, it can be sensory overload with the heat of the hell scene, the bumpiness of the car over the train tracks and one scene which features flashing lights.

As we return to the land of today after exploring this wild ride, there is a reason why it still continues to be one of the most popular fantasyland classic attractions at Disneyland. It is crazy good fun.

Now why Disney Imagineers added the hell scene in the ride, I have no idea, but many Disney fans find it to be the best part of the attraction itself.

You can find it nearby its dear friends, Snow white’s enchanted wish, which has recently been refurbished, Peter Pan’s Flight and Pinocchio’s Daring Journey.

The first two are part of the Class of 1955 club as well! It makes it equally special as it’s the only one at any Disney Park anywhere.

Mr. Toad’s Wild Ride stands as a reminder that there are Disney films and history that guests today may not even know of or have seen, but thanks to Disney+, we can! It is a way to continue to show off Walt and his legacy.

Have you ridden Mr. Toad’s Wild Ride at Walt Disney World or Disneyland Resort? Have you watched the movie? Share your thoughts and memories with fellow solo travelers in our Facebook Group!

UP NEXT: 7 BEST Places to Eat at Disneyland on a Budget! (Disney Food Guide)