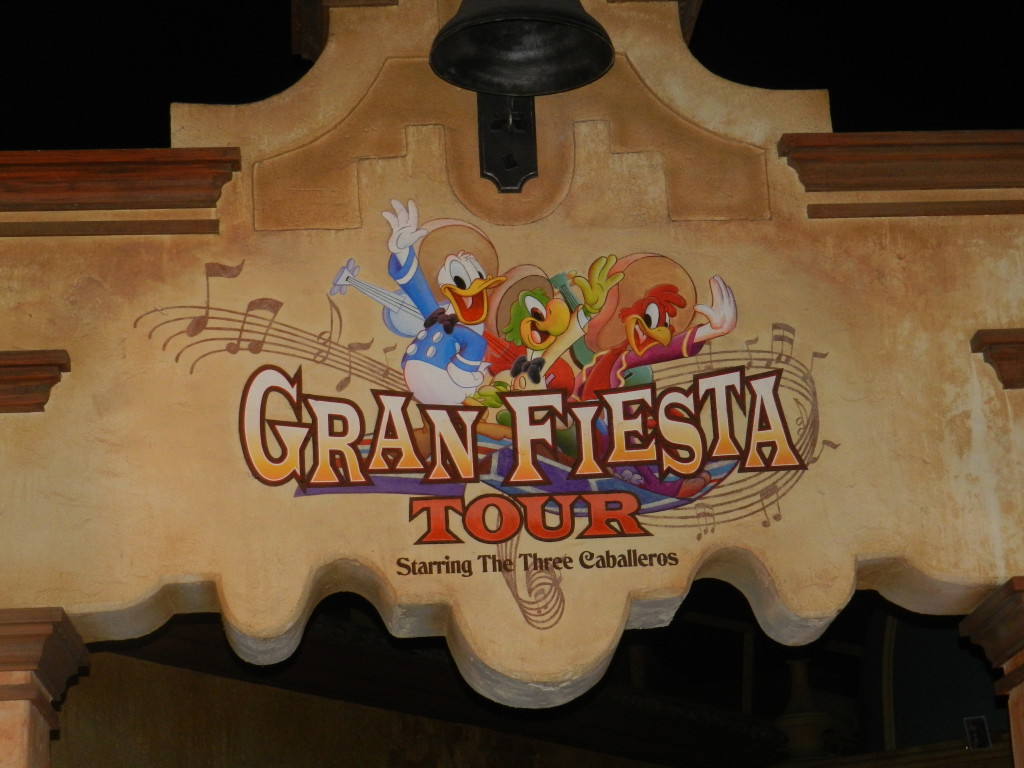 Are you ready to take an EPIC journey on the Gran Fiesta Tour Starring The Three Caballeros?

In the Mexico Pavilion, hailed as the place where one should start when conquering World Showcase, is one of the best rides at Epcot. Its considered to be a family dark ride, but it is also a nice way for a solo traveler to relax and see the sights!

Gran Fiesta Tour Starring The Three Caballeros pays homage to a classic Disney film while showcasing the beauty and culture of Mexico.

Some may say it could use an update. Some say that it should be replaced with a Disney Pixar “Coco” themed attraction. But for now, there are no plans for such changes or refurbishments.

In the meantime, I will be going over the following for Gran Fiesta Tour:

To all my amigos viajeros solitarios, let’s dive into this classic Disney attraction!

History of the Gran Fiesta Tour Starring The Three Caballeros

You may be surprised to learn, just as I did when I was researching the history of Gran Fiesta Tour, that it was not the original attraction Disney first had in mind for Mexico Pavilion.

Originally, when the Mexico Pavilion was in the works and not yet built, Disney Imagineers had an attraction called “Las Tres Culturas de Mexico” which was to be an indoor/outdoor ride.

The attraction would take guests through three periods of Mexico’s history. This attraction would have had a similar structure to the now defunct “If You Had Wings” attraction which was in Tomorrowland at Magic Kingdom until 1989.

The attraction would have had projections in the rear in physical sets. You would start your journey in pre- Colombian Mexico, followed by a journey through the colonial period and ending in modern Mexico.

The story was inspired by a Mayan myth in which the gods take the gift of music from the sun and give it to the earth. This attraction was a good chunk along in its development but it got pushed back to Epcot’s phase 2.

Eventually it would be changed to “El Rio Del Tiempo” after Germany’s Rhine River Cruise attraction and Japan’s Meet the World show was shelved, leaving not many attractions for guests in World Showcase.

Due to this, El Rio was made an opening day attraction, with it being made a completely indoor attraction and having it be shortened by 40%.

The pavilion and attraction were built fairly quickly and debuted on Epcot’s opening day on October 1, 1982.

In the 1990s, attendance dropped and rumors spread that the ride would be changed. During the 2007 refurbishment, the decision was made to give the attraction a brand-new storyline and thus Gran Fiesta Tour Starring the Three Caballeros was born!

Story Behind the Attraction

Gran Fiesta Tour actually maintains most of the sets, with the most major change being the finale scene where the carousel from “El Rio De Tiempo” was removed and replaced with a stage and a mural was added.

New animation featuring the Three Caballeros, Donald Duck, Jose and Panchito were done by Eric Goldberg to have the feel of Ward Kimball and Fred Moore’s animation style from the film. Screen were added to include this brand-new animation.

A new soundtrack was included which featured a new theme “Paso Doble” and the original “The Three Caballeros” song. New film was shot for the live action Mexico scenes.

What to Expect on This Disney Dark Ride

The story places guests in longboats and prior to this, you will see posters indicating that the three Caballeros will be putting on a concert!

As you pass by a Mayan pyramid and Volcano, you will enter another room where Jose and Panchito introduce themselves, but quickly discover the third member, Donald Duck, is missing.

Donald has run off on his own adventure and you will join Jose and Panchito through their journey as they go through Mexico to find him.

While Jose and Panchito travel on their Magic carpet. You will travel on boat as we explore different parts of Mexico.

After touring various scenes including “It’s a small world” esque animatronics. In the finale, you will finally join the Three Cabarellos in Mexico City as they perform their concert with fireworks in the background.

The Three Cabarellos animatronics in the finale was placed in the attraction in 2015 and came from the now defunct Mickey Revue attraction from Tokyo Disneyland.

We have completed our tour and now we can go over some helpful tips!

Although Gran Fiesta Tour may seem like another way for Disney to squeeze in an Intellectual Property, its history is fascinating regarding what it could have been, what it once was and what it is today.

It does showcase a small taste of the Mexican culture in a delightfully engaging way for solo travelers and families alike. It’s also a wonderful way to just take a break and relax from a long day at Epcot.

Whether a new change is on the horizon or if we shall have the trio for a few more years to come, we can all agree that we appreciate this relaxing, fun dark boat ride that has bits and pieces of Disney’s past in it.

UP NEXT: Magic of Possibility: 9 BEST Epcot Rides and Attractions You MUST Experience