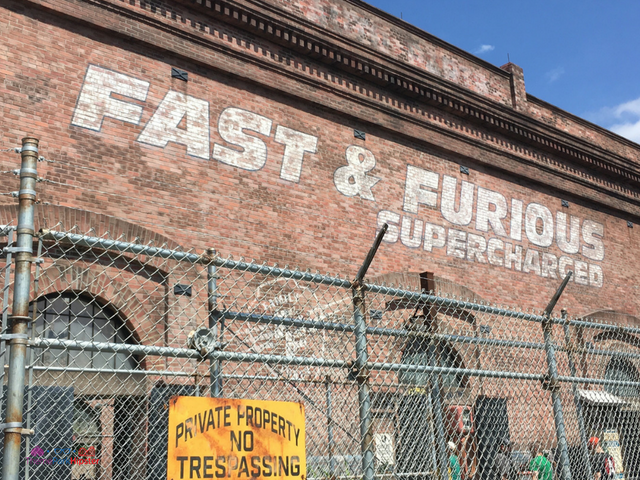 I know, you’ve heard all the bad reviews flooding the internet. Unhappy fans wanting something new seems to be the majority.

And I can understand why.

No, you don’t have to avoid Fast and Furious Supercharged attraction at Universal Studios Florida. This ride has been the main source of controversy in many of the online theme park groups and forums.

Before you jump on the bandwagon of negativity, here are some my thoughts on the Fast and Furious ride and why you should or shouldn’t give it a chance.

And trust me, my opinion has changed since it’s over-the-top grand opening at Universal Studios.

The Fast and Furious is a major film series with a huge cult following. The concept of adding it to a theme park was brought to reality at Universal Studios Hollywood as a stop on the famous tram tour.

It was a great addition to the tour and since has been added to the Florida park as its own standalone attraction.

With all the hype that surrounded it, many fans were excited for the new ride to open except a small group like myself (I had been burn a couple of years prior with the opening of Skull Island: Reign of Kong as I thought it was going to be a totally different type of attraction).

My lack of excitement was due to the fact that it was going to be basically an exact copy of the one in Hollywood, California with just a queue feature added. Which is what we got…

Because my expectations where so low, I didn’t have any bad words for it, until I took my husband on it for the first time in 2021.

He’s a big fan of the franchise and is not into the theme park world like I am, so I kept silent about the overall fan disgust of the ride and wanted him to have his own natural reaction.

And it wasn’t great…

As the party bus pulled into the docking station for us to get off, he looked at me and said, “that was the WORST ride I’ve ever experienced.”

Now keep in mind that he doesn’t give strong opinions on ANYTHING theme park related. His usually responses to my inquiries are: it’s cool, it’s good, it’s okay. That’s as much as you will get out of him.

So, for him to have such a strong reaction to it regarding not understanding what was happening, the screen effects, the lack of views from his area of the bus, and the discomfort he felt riding it, made me have to look at the ride differently.

Not saying that you shouldn’t give it a chance, it’s just not a Universal Orlando attraction that I will promote as a must-do.

So, throughout the rest of this guide, I will give you all the details you need to know about Universal’s Fast and Furious Supercharged ride that way you’ll know exactly how to make the most of your experience if you choose to do it.

Where is Fast and Furious Supercharged located?

This ride is located in the area of the old Earthquake attraction in the San Francisco section of Universal Studios.

Now let’s touch on what you can expect from Universal Orlando’s newest experience.

As you approach the warehouse, you will immediately feel as if you’re in the heart of a San Francisco neighborhood.

At busy times, there are return time slips that can be picked up to the right of the attraction entrance, if you’d like to take advantage of the Virtual Line system.

How does Universal Virtual Line works?

To use the Virtual Line queue, you can either download the Universal Orlando Resort app to make reservations on there or you can use the kiosks next the Fast and Furious Supercharged as previously mentioned when available.

2nd Step – Choose Virtual Line on the Left Side Bar

3rd Step – Select the Available Attraction of Your Choice

If the wait is low you can just proceed to the entrance and start your journey with the “family.”

There are 3 Lines in the Fast and Furious Ride:

Once you begin walking through the queue you’ll see unique items from the franchise with little Easter eggs hidden throughout the attraction.

You can read the full list of Fast and Furious Supercharged Easter eggs here.

As you continue throughout the queue you’ll notice actual cars and car parts to let you know you’re in a garage, but not just any garage.

It’s a party garage with “family.”

Dance music starts immediately upon enter the building and the emphasis of “family” is heavily promoted as you wander through.

There is a virtual Fast and Furious trivia game that can be play on your phone through Universal Orlando app with the objective of getting the highest score among other guests waiting in the line.

You will be treated by multiple appearance of Chris “Ludacris” Bridges while waiting and you’ll also experience the classic Universal treat of having real life actors in the two pre-shows.

They let you know that the FBI is targeting their location and the villain, Shaw, is also following you.

Once you finish the final pre-show, you’re taken to the loading platform where it’s time to really get this party started.

This is a screen-based attraction with the same video taken from the Fast and Furious ride over at Universal Studios Hollywood. You hop unto the party bus, exactly like the Skull Island Reign of Kong ride in Islands of Adventure.

The truck pulls up with dance music and lights. You’re sent to a party with the family, which is ruined by an agent.

Next, you’re sent on an action-packed race through San Francisco to escape the so-called “bad guy” Shaw.

Once the intense experience is over, you land in a garage-like warehouse escaping Owen Shaw and officially becoming a part of the “family.”

Hipster Power Tip: Try to sit in the middle towards the edge if you want the best seat.

Is Fast and Furious Supercharged a roller coaster?

The Fast and Furious ride is not a roller coaster. It’s a 3-D immersive attraction that takes you right into all the movie action!

Does Fast and Furious ride go upside down?

The Fast and Furious Supercharged ride at Universal Studios does not go upside down so you won’t have to worry about that. It is a bit of a bumpy ride experience so that’s the most discomfort you’ll get.

Pros of Fast and Furious Supercharged at Universal

I honestly was surprised by how much I enjoyed this ride the first time (like I mentioned earlier, my standards were low). I hated Skull Island Reign of Kong mostly because I envisioned something totally different than what we received.

This time I had very low expectations, but since I’d experienced portions of this attraction in Hollywood, I just wanted to give it a shot.

These are some of the great features of this ride:

Cons of Fast and Furious Supercharged Ride at Universal

Although I truly enjoyed this ride, I do understand some of the negative complaints about this attraction.

Read how to find your perfect vacation home rental in Orlando by Clicking HERE!

What to Know Before You Go to Universal Studios

Now that you have an understanding on the Fast and Furious Supercharged ride at Universal Studios, let’s go through a few things you should now before your vacation.

You’ll want to save time on your Universal Orlando trip, so you must have a game-plan to save time and see the most popular attractions.

You can grab your FREE Universal Orlando Resort Guidebook below!

What time does Universal Studios open?

Universal Studios Florida is open 365 days a year from 9 a.m. to 6 p.m. in the regular season. Hours may change based on the busyness of the park.

How much does it cost to go to Universal Studios in Florida?

The cost of admission starts at $125, but I like discounts so I use Groupon and The Park Prodigy to find cheap Universal Studios tickets.

What should I do first at Universal Studios Orlando?

One of the best Universal Studios Orlando tips that I can give you is to start at Diagon Alley first.

This Harry Potter-inspired area will fill up quickly making the line for the two attractions (Escape from Gringotts and Ollivanders wand experience) extremely long.

If you’re at Islands of Adventure, then you must experience Hagrid’s Magical Creatures Motorbike Adventure first!

Overall, I do recommend this attraction for anyone visiting Universal Studios Florida if the wait is low. It’s an easy ride to beat the Florida heat and a cool place to listen to some great music while looking at incredible cars.

I personally feel it’s an okay addition to the Universal Studios theme park and it will help offset some of the crowd level on the busy days at the park.

If you go into this attraction with an open mind, then you may come out of it satisfied.

Do you think this is Universal Creative’s best work? Is it the worst ride? Comment below and let me know your thoughts.