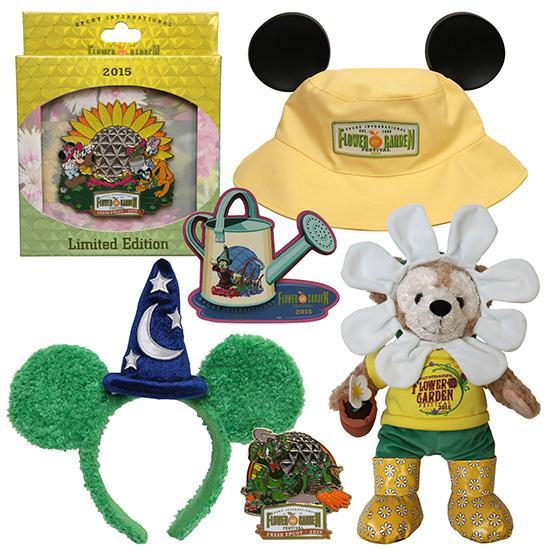 Many ThemeParkHipsters have an avid passion for Walt Disney World merchandise, that’s why I try to keep each and everyone of you informed on the latest items coming throughout the parks.

During the 2015 Epcot International Flower & Garden Festival, the Sorcerer Mickey topiary will take center stage as the main logo on several event items including a coffee mug (the mug features a hidden broom topiary image inside), magnet, and tote bag.

Also, the Disney pin team has created several limited edition pins featuring the topiaries that will be found throughout Epcot, including the new Anna and Elsa topiaries inspired by Disney’s Frozen.

According to Disney Parks Blog, there will also be a new Dooney & Bourke collection designed by the Disney Design Group artist Paola Gutierrez. The black-and-white pattern will show a variety of Disney character silhouettes riding vintage bicycles. The new Dooney & Bourke collection will be released during the Flower & Garden Festival and will include a specially designed hangtag.

This year’s Festival will allow families to explore and learn about the various topiaries in a new way! The whimsical topiaries will feature Disney characters in an interactive Pinterest Pin scavenger hunt. Even Frozen fans will be transported to Arendelle with a scene featured from the film’s finale. To participate just print the Pin at home and, once at Epcot, the family can follow the map to discover the colorful and exotic topiaries of Epcot.

Until next time, have fun exploring the beauty of Epcot!