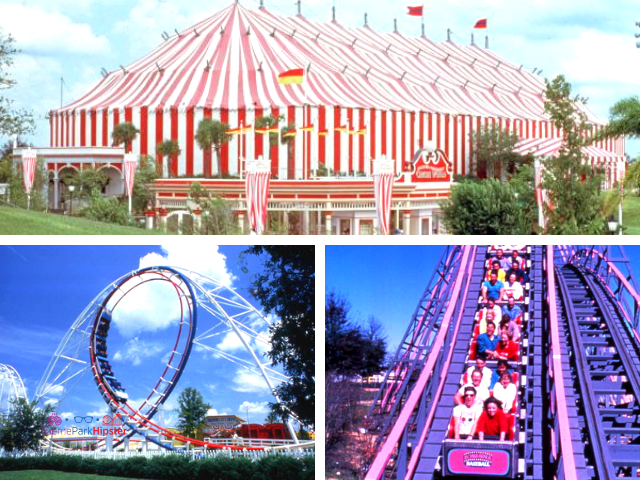 Boardwalk and Baseball was my introduction into the world of amusement parks and theme parks. The short lifespan of the park was sad and I’ve always wished that it had stayed around so that I could have experienced it again as an adult.

Boardwalk and Baseball was located outside of Orlando, Florida in Davenport at the corner of Interstate 4 and Highway 27. Right in the heart of Florida.

Early Memories of Boardwalk and Baseball

My fondest memory was of the gigantic wood roller coaster named the Florida Hurricane and how I wished I was big enough to ride it.

Writing this article reminds me of the joy I felt that day on my field trip while attending Yalaha Headstart School in Lake County Florida.

There were many rumors regarding why it had closed, so today we’re going through the history of Boardwalk and Baseball.

The 135-acre park was designed around the prime days of Coney Island and Atlantic City at the turn-of-the-century. Boardwalk and Baseball opened on Valentine’s Day of 1987 when it was changed over from Circus World, and closed January 17, 1990.

This theme park was also meant to be the winter headquarters for the circus and to house the Ringling Bros. and Barnum & Bailey Clown College and museum.

1976 saw a peak rise in park attendance topping out around 1.3 million.

Although this seemed to be a good start for the circus-inspired theme park, attendance began to decline lasting seven years until a profit was finally made in 1980.

Despite the upkeep of the park and additional rides and show, attendance once again declined. This time the low crowd levels lasted five years in a row. Mattel who’d purchased the park from the Ringling Bros., sold Circus World to Jim Monaghan, which was finalized in 1984.

Monaghan goal was to make Circus World a world-class theme park by adding nine major thrill rides, but the park could not compete with the newly built Disney theme park, Epcot.

The Harcourt Brace Jovanovich Park Group goal was to turn the once circus-filled theme park into an Atlantic City inspired attraction called Boardwalk and Baseball.

The mid-1980s to late-1990s ushered in the theme park boom in central Florida. Michael Eisner’s golden age with the Disney company caused tourism to explode not just in Orlando, but in surrounding central Florida towns.

Tampa had its own piece of theme park real estate along with Polk County, Florida housing two popular theme parks at the time, Cypress Gardens and Boardwalk and Baseball Florida.

Central Florida was quickly becoming the number one tourist destination in the world.

…then came the Disney boom.

Both Michael Eisner and Frank Wells are responsible for keeping Walt Disney World alive with their golden era of world-class Imagineering.

Walt Disney World added two major theme parks in the 1980s, along with countless hotels and onsite activities to keep guests on the property.

This was evident as local theme parks such as Circus World/Boardwalk and Baseball couldn’t compete with the theme park blueprint Disney continued to execute.

The change from Circus World to Boardwalk and Baseball brought about much excitement to the central Florida area.

A facelift of the failing circus-inspired theme park was something thought to compete with the neighboring Disney parks.

Following the transition, the new park tagline, inspired by the early boardwalk days, would go on to say: “Boardwalk and Baseball, An American Classic.”

Boardwalk and Baseball would be divided into two sections: the boardwalk area and the baseball section.

The Boardwalk section offered about 32 rides with a four-minute log flume attraction and the signature ride, the Hurricane wooden roller coaster.

Other Boardwalk and Baseball Attractions

The baseball portion of the park housed a 7,000- seat stadium available for Kansas City Royals spring training. The Baseball City Royals, a local team, also hosted games there too.

Park guests were welcomed to view different activities and games that took place around the stadium area.

There was even the ability to make your own baseball card where you could choose your top team uniform, globe, cap, and bat. All-the-while getting into your favorite baseball pose.

Even with the spring training bringing in top athletes, this could not sustain the theme park.

Cursed Before it Started

The idea and concept of Boardwalk and Baseball Theme Park was really good.

Now, the execution was definitely one of the factors that led to the quick demise of this promising theme park.

Coming off the coattail of Circus World, which was never truly successful, also added to the downfall of Boardwalk and Baseball.

The standard state fair type of rides could not compete with the imaginative genius in the world class Walt Disney World attractions.

Plus, the lack of care throughout the park such as cleanliness, poor staff morale, and lack of quality in both food and entertainment made the perfect brew for a disastrous theme park.

Boardwalk and Baseball did not connect with Florida tourists like Disney did. It also had even more competition with SeaWorld, Busch Gardens, and Cypress Gardens which basically sealed the deal on its demise.

Baseball fans were not even invested enough to help secure the parks future and on the afternoon of January 17, 1990, the new owners, Busch Entertainment, shut down the park with patrons still inside.

It was rumored that the closing came based on a claim from Busch Entertainment that Boardwalk and Baseball never made a profit.

And just like that, the theme park was done.

The following decade would be filled with rumors of a possible Six Flags replacement, but all that ended when the longstanding IMAX theater was demolished in 2003.

If you google Boardwalk and Baseball you will come across information from others who loved the park as well.

Although the land was eventually transformed into retail space, restaurants, and offices, I will always have a special place for Boardwalk and Baseball in my heart.

It was my very first introduction into theme parks, which inspired me to create this website for other theme park enthusiasts.

Do you have any pictures or personal stories from Boardwalk and Baseball or Circus World? If so, please share them with me in the comments section below.

For more theme park news, discounts, tips and guides, subscribe to the newsletter!

12 thoughts on “The Unfortunate History of Boardwalk and Baseball”